America Is Run By Jews

Profiles In Jewish Supremacy, How The Jews Talk - Pt 1, Jewification Of America Articles 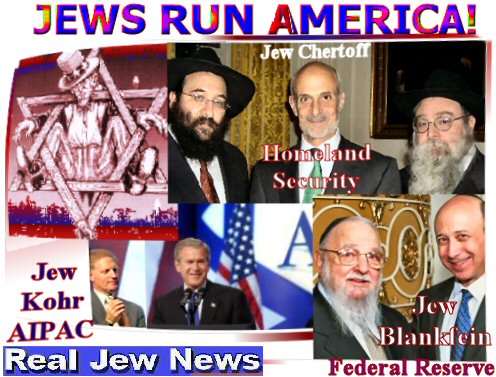 AMERICA IS RUN BY JEWS
By Brother Nathanael Kapner, Copyright 2008-2011

Or Send Your Contribution To:
Brother Nathanael Kapner; PO Box 547; Priest River ID 83856
E-mail: bronathanael@yahoo.com
AMERICA IS NOW A JEW-RUN NATION. Here is a list of the prominent Jews who run America:

2. Lloyd Blankfein: CEO of Goldman Sachs Bank of NY. Goldman Sachs is one of the owners of the Federal Reserve Bank consortium, made up of 8 banks, the House of Rothschild being the principal owner.

3. Harvey Krueger: Chairman of Lehman Brothers Bank of NY. Lehman Brothers is one of the owners of the Federal Reserve Bank consortium, made up of 8 banks, the House of Rothschild being the principal owner.

4. Michael Chertoff: Secretary of US Homeland Security. Chertoff is the son of an Orthodox rabbi. A dual-citizen of both Israel & America. Guess which nation the Jew Chertoff’s first loyalty is to? Chertoff is chief architect of the North American Union Plan and the Orwellian Real ID Card.

5. Howard Kohr: Executive Director of the most powerful lobby group in the world, the American Israel Public Affairs Committee (AIPAC). AIPAC is made up of both Republican and Democratic Jews who have one single purpose -to secure Jewish-control of the world.

6. Malcolm Hoenlein: Executive Chairman of the second most powerful lobby group in the world, the Conference of Presidents of Major American Jewish Organizations. Has 50 (!) Jewish member organizatons under him. 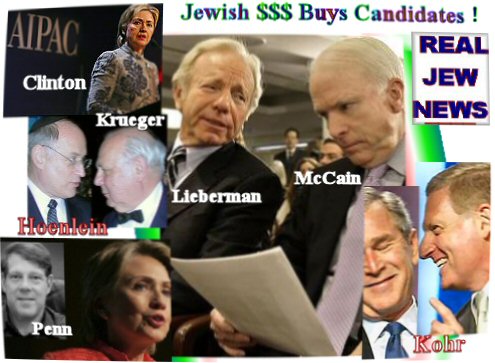 HILARY CLINTON & JOHN McCAIN HAVE BOTH
BEEN BOUGHT BY THE JEWS

HILARY CLINTON’S FUND RAISERS are the multi-millionaire Jews, Mark Penn and his wife, Nancy Jacobson. Penn, known around the world as “King of the Polls,” is CEO of Burson-Marsteller and President of Penn, Schoen and Berland Polling Company.

As CEO of Burson-Marsteller, Penn oversees a global network of 94 offices that brings public relations to politicians and companies around the world. As President of PSB, Penn provides polling strategies to political figures both in America and abroad. Tony Blair was re-elected as prime minister of England in 2005 due to Penn’s world-wide Jew-connections .

Senator Joseph Lieberman, an Orthodox Jew who subscribes to the racist Jewish Talmud is now accompanying McCain on the campaign trail. This is a sure sign of Jewish control of McCain. The pay-off will be McCain having Lieberman as his running mate or appointing Lieberman to a key cabinet position.

In other words — both Hilary Clinton & John McCain have been BOUGHT by the Jew$!

HOW DO WE STOP THE JEWISH CONTROL OF AMERICA?
Here are 3 options:

* Convert to Judaism and be part of the Single-Party political system in America.

* Convert to Judaism and be part of the Jewish-Takeover of former Christian America.

* Don’t convert to Judaism. Instead call on the name of the Lord Jesus Christ to grow a revival of Christianity in America.

Only When America Becomes A Christian Nation Once Again
Will The Jews Lose Their Power To Lead Us As Sheep To The Slaughter!