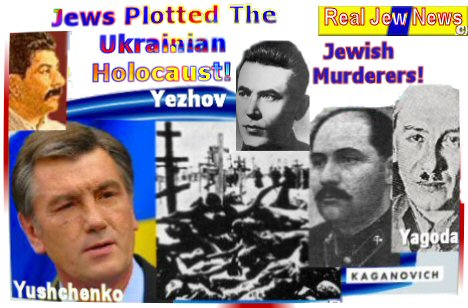 Or Send Your Contribution To:
Brother Nathanael Kapner; PO Box 547; Priest River ID 83856
E-mail: bronathanael@yahoo.com
Primary Source: “Stalin’s Agricultural And Five-Year Plans,” Dr. E.L. Magerovsky, Association of Russian-American Scholars; Other Sources Below
___________________________________
JEWS WANT THE WORLD to believe that they have a monopoly on “Holocaust Remembrances.” But Ukraine’s President Viktor Yushchenko has thrown the Jews a curve by dedicating 2008 as “Ukrainian Holocaust Remembrance Year” Here.


This “holocaust remembrance” recalls the murder by forced starvation of *6 million* Ukrainian Christians by the Jewish Bolsheviks. The Ukrainians call this holocaust “Holodomor” which means “Famine-Genocide.” Of course the Zionist Jews deny it. Just like they deny all of their numerous crimes against humanity.

Historian Valentyn Moroz of the Institute for Historical Review wrote:

— “The Ukrainian village had long been recognized as the bastion of national traditions. The Bolsheviks sought to strike a fatal blow at the village structure because it was the lifespring of the vital national spirit.” — Here.

Indeed, Bolshevik Jews were the chief architects of the Ukrainian forced-famine which eliminated Ukrainian clergy and 6 million Ukrainian Orthodox Christians! 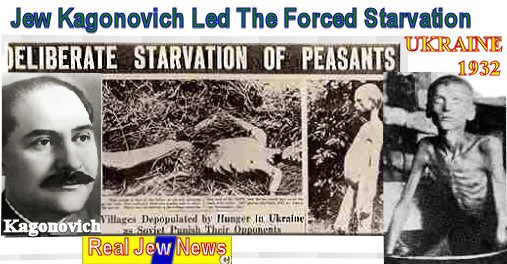 THE BOLSHEVIK JEWS WHO PLOTTED THE UKRAINIAN HOLOCAUST

1) Lazar Kaganovich: Stalin’s political figurehead of the Central Committee. In 1928, Kaganovich led the implementation in the Ukraine of Stalin’s first Five-Year Plan.

~ The aim of Stalin’s first Five-Year Plan in the Ukraine was to destroy family farms through starvation making the peasants “landless” and thereby introducing “collectivization” by which the Ukrainian peasants were forced to become employees of the state. This forced-famine reached its crises point in 1932.

3) Nikolai Yezhov: Appointed by Yagoda as Head of the NKVD. Assisted in the first Five-Year Plan of starving Ukrainian peasants. (Yezhov took on a “Russian” name like most Bolshevik Jews. His wife was an active Jew).

These Bolshevik Jews seized livestock, crops, grain, and farm implements from the Ukrainian peasants. Any Ukrainian citizen who resisted them was shot. Desperate Ukrainian clergy and peasants ate anything to survive: bugs, grass, and leather shoes. 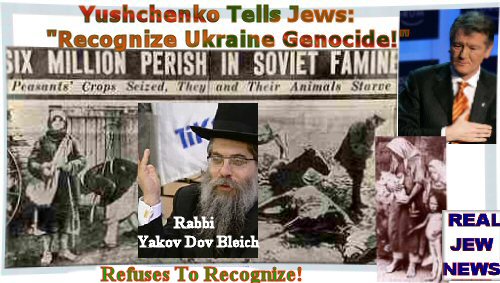 “Fresh from the controversy over shifting positions on the Armenian genocide, the Jews could be caught up in another controversy over Ukrainian-genocide recognition,” reports the Baltimore Times Here.

Yushchenko has pressed the genocide issue since taking office in 2005. In 2007 more than two dozen countries recognized the Holodomor as genocide. Yet the Jews of the Ukraine and around the world refuse to recognize it!

— “We can’t equate the Holocaust of the Jews in Germany with the Holodomor in Ukraine. Ukrainian Jewish leaders do not support recognizing the Holodomor as genocide.” — Baltimore Jewish Times, Nov 14 2007.

WE MUST PUT THE ZIONIST JEWS IN THEIR PLACE!

I GREW UP AS A JEW. Jews want a monopoly on the world’s “sympathy.” But the Jews do not deserve the world’s sympathy as the Ukrainian Christian clergy and peasants deserve it. For they were *innocent victims* of the forced famine.

JEWS HAVE *NEVER* been the innocent victims of any “holocaust.” I have proved this by my many articles such as HERE backed up with historical facts!