Will The Jews Provoke WW III In Kosovo? 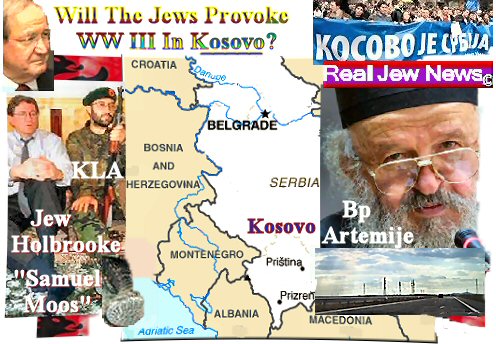 WILL THE JEWS PROVOKE WW III
IN KOSOVO?

JEWS PLOTTED THE WAR AGAINST ORTHODOX-CHRISTIAN SERBIA in the spring of 1999.

The US bombed Serbia for 78 days to force its army out of its province of Kosovo.

The Serbs were fighting terrorists of the Kosovo Liberation Army (KLA). And the US had no more right to bomb Belgrade than the Royal Navy would have had to bombard New York in the American Civil War.

Here are the Jews who led the bombing of Serbia who tried to save Kosovo from the Muslims:

1) US Secretary of State Madeleine “Korbel” Albright, born of Czech Jewish parents; 2) The US Ambassador to the UN, Richard Holbrooke, who changed his Jewish name “Samuel Moos;” 3) And the Jew, David Scheffer, Albright’s Ambassador For War Crime Issues, were at the lead in waging this war against Orthodox-Christian Serbia and Kosovo. 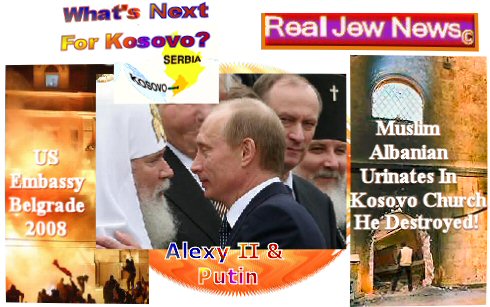 THE U.S. WAR ON SERBIA-KOSOVO was unconstitutional. Congress never authorized it. The US made an enemy of the Serbs and alienated Russia to create a second Muslim state in the Balkans at the expense of Orthodox Christian Serbs.

On February 17 2008, Kosovo declared independence and was recognized by the European Union and President Bush. But this is not the end of the story. It could be the preface to a new history of the Balkans, namely, WW III.

Already, the Serbian Orthodox Bishop Artemeje in Kosovo is calling for a show of arms Here. 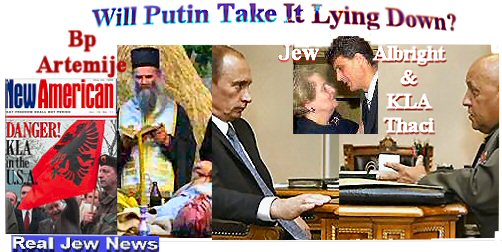 THE REAL ISSUE IS “MUSLIM VS CHRISTIAN”

THE JEWISH CONTROLLED MASS MEDIA of television, newspapers, film, and magazines, would have us believe that the issues surrounding “Kosovo Independence” is a matter of ethnic and democratic considerations.

The Jewish Press continually harps about “ethnic Albanians” and “democracy for the majority.” But nowhere will we read in their biased headlines: “Muslims Burn Down 400 Orthodox Christian Shrines In Kosovo” Here. Now that’s a Holocaust that “Mr. Moos” Holbrooke doesn’t want to discuss!

MUSLIM EXTREMISTS IN THE REGION are already calling for a “Greater Albania” consisting of Albania, Kosovo and the Albanian-Muslim sectors of Serbia, Montenegro and Macedonia. A highway is about to be completed linking Muslim Kosovo to its Muslim counterpart in northern Greece with its so-called name, “Macedonia” Here.

It is important to note that the northern part of Greece has always been historically known as “Macedonia.” But the region in the north is called by the Greeks, “Vardarska” or “Skopje.” They illegally changed their name ordered by Tito whose real name was Joseph Bronz. Tito was a Jew and his aim was to take over Thesalloniki and establish a Balkan state controlled by the Jews.

Romania, Greece, Bulgaria, and Spain, have refused to recognize the new “Republic of Kosovo” out of apprehension of “separatist” groups in their own territories.

And how will Putin and Russia now react to a serial Balkanization that the US and the EU have just reignited in the Balkans?

Could this be the very beginnings of a Jewish-provoked WW III?

And: “US State Department Is Run By Jews” Click Here

And: “Why An Independent Kosovo Is Illegal” Here