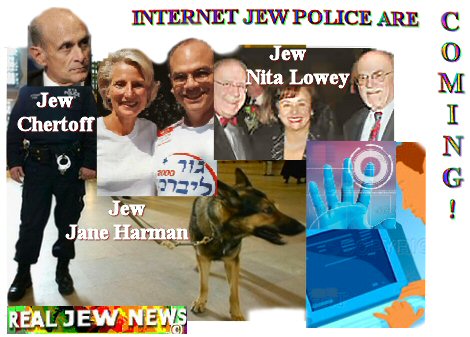 H.R. 1955 would give the U.S. government the power to arrest ANY AMERICAN CITIZEN who voices opposition to the U.S. Government.

The Bill would establish two government-appointed bodies to monitor and propose ways of curbing what it calls “homegrown terrorism” and “radicalization” in the US. The first body would be designated a National Commission. (Needless to say, Jews will be appointed to this Commission.)

A university-based “Center for Excellence” of academic specialists would follow to recommend laws to ‘curb’ “radicalization.” (Needless to say, Jews already running US academia will be appointed to this Commission.)

When the Bill become law, look for Jewish groups to start clamoring for the Internet to be regulated some way - but it’s only for OUR PROTECTION! 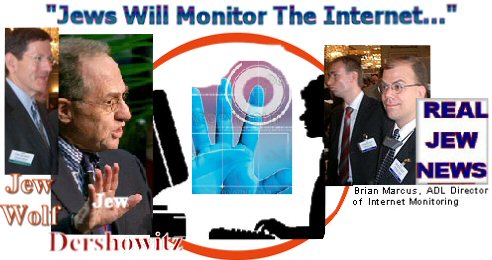 HOW THE JEW BILL READS

THIS BILL TARGETS THE CIVILIAN population of the US and uses vague language to define “violent radicalization” and “homegrown terrorism.”

Here are the definitions as specified in Section 899A of the Bill:

— “VIOLENT RADICALIZATION - The term ‘violent radicalization’ means the process of promoting an extremist belief system for the purpose of *facilitating* ideologically based violence to advance political, religious, or social change.”

“HOMEGROWN TERRORISM - The term `homegrown terrorism’ means the planned or threatened use of *force* or violence by a group or an individual operating within the United States to *intimidate* or coerce the civilian population in furtherance of political or *social* (Translate *Jews*) objectives.” —

The Bill mentions the Internet as a main source for “violent radicalization.” The Bill cites many ‘Patriot’ and ‘Pro-Constitution’ Web Sites as probable “homegrown terrorists.”

JEWS WILL CONTROL THE INTERNET
UNDER THE GUISE OF FIGHTING TERRORISM

THE ANTI DEFAMATION LEAGUE has 2 Internet Watchdog Groups waiting in the wings:

2) International Network Against Cyber-Hate (INACA)-headed by the Jew Christopher Wolf.

Recently, the anti-zionist Web Site, “Wake Up From Your Slumber” Here was visited by US Homeland Security detectives. The owner of the Site wrote:

— “Two anti-terrorism detectives came knocking at my door to investigate an accusation that my site was funded by HAMAS. Not only is the accusation outrageous because it’s a LIE, but also far from just a routine cry of ‘anti-semitism.’” —

WE MUST ACT NOW TO STOP THE JEW-SPONSORED BILL!

And: “Big Brother Jews At Homeland Security Are Watching You” Click Here