The Jewish Thought Police Are Here! 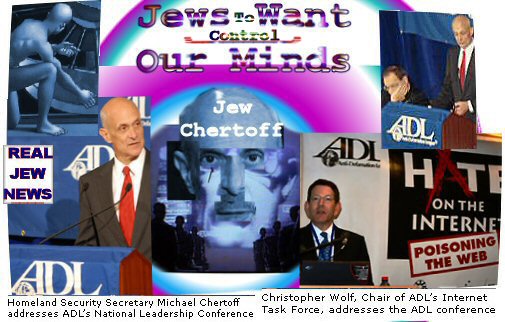 JEWS ARE ENEMIES of free speech.

This was asserted 2000 years ago by St Paul when he wrote: “The Jews forbid us to preach the Gospel to the Gentiles that they might be saved.” (I Thessalonians 2)

On November 8, 2007, the ADL launched Here what it called, “A Nationwide Cyberbullying Educational Initiative designed to protect children from harassing behavior and hate on the Internet.”

But we who know better call this initiative: “A Nationwide Cyberbullying Tactic of the ADL by which the ADL ostensibly uses the ‘protection of children’ to curtail freedom of speech.”

In other words: Jews wish to infringe upon our right of freedom of speech to protect their wicked agenda. 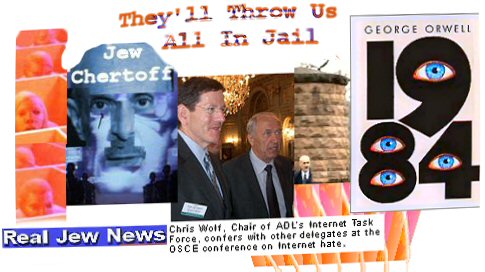 ON NOVEMBER 12 2007, the Jew, Brian Marcus, Director of ADL’s Internet Monitoring Department, gathered over a dozen so-called “experts” to discuss “hate” over the Internet Here.

The conference, organized by ADL’s Israel Office in Herzliya, was opened by Christopher Wolf, Chairman of the ADL Internet Task Force and the Director of the new Jew-organization, (does it ever end?), the International Network Against Cyber-Hate.

Wolfe said in his opening speech:

Here is what Wolf really meant:

— “Even though smut continues on the Internet unabated, the real issue is Internet criticism of we Jews which both shames and exposes us.” —

In other words: Jews wish to infringe upon our right of freedom of speech to protect their wicked agenda.

ON AUGUST 27 2007 the Jew Michael Chertoff, Secretary of US Homeland Security, gave a speech Here before the Association Of Chiefs of Police. Chertoff told them:

— “Disaffected people in the US may use radical ideologies over the Internet. This presents the next major security threat to the nation. These disaffected people are the kind of terrorists that we may not be able to detect with spies and satellites.” —

And everybody went away saying, “Boy these Jews want to silence all the ‘disaffected people’ who say things about them that they do not want the world to hear!”

In other words: “We must stop the Jewish Thought Police before they throw us all in jail for exposing their crimes!”