Are Jews Our Misfortune? 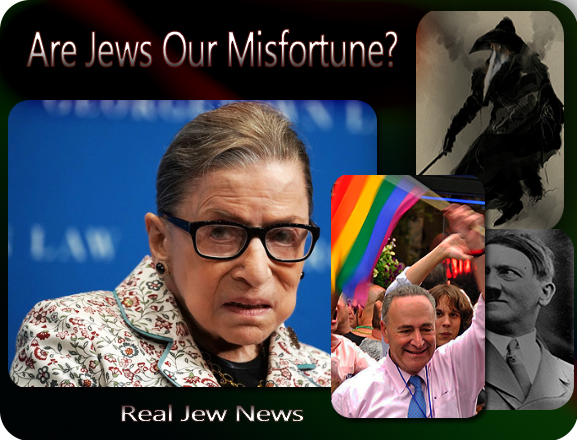 “Die Juden Sind Unser Ungluck!” was a slogan, (a quote actually), printed on the bottom of the popular Third Reich newspaper, Der Sturmer.


Translated, the slogan states, “The Jews are our Misfortune!”

Der Sturmer was published by Julius Streicher from 1923 to 1945. The paper was endorsed by Hitler as a tool to influence the man on the street.

After the war, Streicher was tried and condemned at the Nuremberg trials for “crimes against humanity”—translate—”criticizing the Jews,” and the Jews got him “hung from the gallows” simply for publishing the paper.

(Sound familiar? Simply say you’re opposed to the genocide of the Palestinians and the hanging judge whether a shill or a Jew is at the door.) 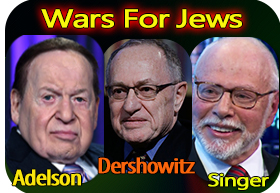 THERE IS MUCH for which to criticize Jews today and one finds himself mining a mountain of malfeasance that wearies the soul in an effort to process a myriad of names and the attendant offenses.

Beginning with the promotion of sexual-deviancy we find Jews in high places not only advocating this accursedness but actuating laws that grant to it credence and validation.

And not only is its affirmation legislated from the bench but a tacit censure on those who oppose its proliferation is set in motion.

While the Jew-owned main stream media celebrates the Jews who subvert the laws of nature—Ginsberg, Breyer, Kagan, and Sotomayor (her mother a Sephardic Jew)—a plague inflicting a scourge on society has been unleashed.

For while claiming to be broad minded, Jews on all sides of the political aisle—like Adelson (Republican), Dershowitz (Democrat), and Singer (Libertarian)—are narrowly fixed on one goal, that the goyim should fight wars for Israel thousands of miles away. 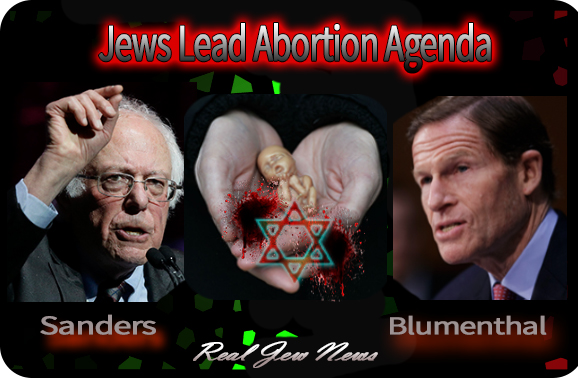 Responding to a gushing introduction, (NBC is owned by the JEW Brian Roberts and run by Jews Ron Meyer and Adam Miller with a few Gentile shills thrown in), Steinem exclaimed:

“It’s relevant in terms of the right wing’s position against abortion that Hitler was elected based on his anti-abortion stand, I mean, he padlocked the family planning clinics.”

Surely, if that was indeed the case, the family planning clinics were doubtless run by Jews, and Hitler had good reason to shut them down.

And not so surely is Ben Shapiro’s controlled-opposition posturing that Judaism is “pro-life.”

Well, if Judaism, is Pro-life, it’s for the Jews, not for the Goys, seeing that Senators Richard Blumenthal and Bernie Sanders—both JEWS—are at the vanguard in the murder of the unborn and newly born.

And not only Sanders and Blumenthal (sponsor of the Women’s Health Protection Act which would prohibit states from banning abortion early in pregnancy if Roe v. Wade were overturned, and would invalidate state laws limiting late-term abortion), but a whole slew of Jewish organizations (hundreds of these miserable influential lobbies) push for the genocide of in-the-womb and out-of-the-womb (Gentile) babies. 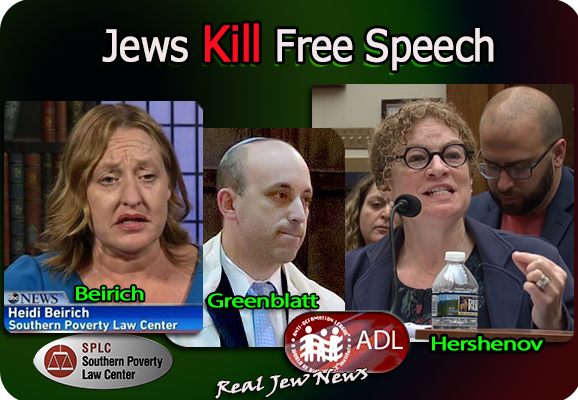 AND WHY TALK about only killing babies? How about killing free speech?

No surprise here that JEWS lead the charge for there is no realm of all that is good and virtuous that Jewry hasn’t taken up arms to destroy.

Once you lose your God-given right to speak your mind then the tyranny of Judaic ideology which denies the resurrection of Christ seizes control of your thoughts and tongue.

For with the Anti-Defamation Leagues’ Jonathan Greenblatt and Eileen Hershenov, and the SPLC’s Hate Map monitors, Seth Levi and Heidi Beirich—BOTH groups designated as the official flaggers of Google and YouTube—once again we find JEWS leading the attack on the First Amendment.

How is it, one might ask, that a few JEWS determine “community standards” for internet postings?

If Jews make up only 1.8% of the population then how did this tiny minority become the arbiters of who should live and who should die on the web? Next thing you know they’ll throw your ass into prison for criticizing their genocidal Jewish State.

We could go on and on of how Jewry militates against all of our hard won freedoms but who has the time to write such a voluminous indictment?

For with these few facts enumerated above the question stares us right smack in the face:

Are Jews our misfortune? No doubt about it.

Mark Of The Beast Here

Attack Of The Algorithm Here

Riders Of The Storm (BANNED by JEWtoob) Here