Dreaming Of A Raid On Russia 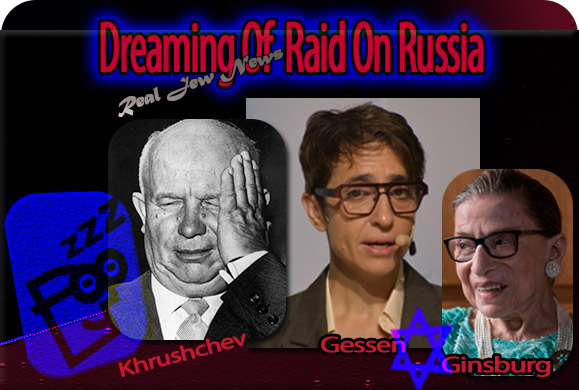 TOSSING AND TURNING all night, I got up, gulped down some borscht, and went back to bed.

Falling into a deep sleep I dreamt I was in Moscow in front of a large apartment building.

“What are you doing here?” I asked Kristol. “I thought you were a neocon?”

“What’s the difference?” he answered, “it’s all a matter of what Jewish flavor of politics you want. All Jews hate Russia now, it’s way to conservative for our tastes,” he remarked.

“And you?” I asked Ginsburg. “What are you doing here?”

“I’m looking for homosexual neighbors. I want to push same-sex marriage here. That’s how I got it passed in America. I said my neighbors in New York were homosexuals. It made for a convincing argument in court. The other three Jews on the bench thought it was brilliant.”

Suddenly, Masha Gessen appeared on the side of the apartment building. She was hauling a bunch of garbage filled with gefilte fish. It really stunk. Schumer and Kristol ran over and started raiding the garbage for leftovers.

Gessen looked so horrid that I started gagging. She looked like a feminized man and her mouth was locked in a scowl. Fellini would’ve had a field day.

“I’m your gal!” she exclaimed to Ginsburg. “I’m an out-and-out lesbian. I’m proud of it and hate Putin so much that the New York Times features me.”

“But you live in America now,” I reminded her, “you’re hardly a Russian ‘neighbor.’”

Then Khrushchev chimed in. 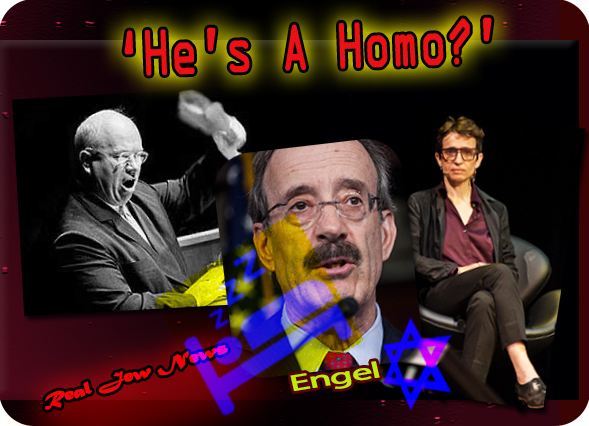 “YOU WANT A HOMO?” Khrushchev asked Ginsburg. “He’s standing right next to you,” pointing to Eliot Engel.

“Eliot Engel’s a homosexual?” I asked Nikita. “How do you know that?”

“Just take one look at him and how he talks in a constant pout,” answered Khrushchev.

“Shut your mouth!” shouted Schumer to me. “Americans have no idea what democracy is all about. You better not tell them!”

“I’ve already told them,” I answered. “Democracy’s awarded to the highest bidder—Jews.”

I pulled out a picture of Putin standing in front of a painting of Czar Nicholas II, and said, “Only monarchy will save the world. Long Live Holy Russia!”

I awoke and poured myself a vodka.

“Ahh,” I said to myself, “I need to listen to Moscow Nights!”

For More See: The Future Belongs To Russia Here

And: Dreaming Of A Trump-Putin Meeting Here

And: Why Congress Hates Russia Here

And: Dreaming Of A Trump Veto That Wasn’t Here

And: Monarchy Must Come To Russia! Here