Dreaming Of A Trump Veto That Wasn’t 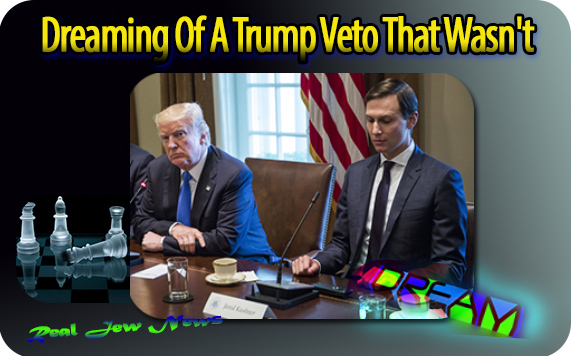 WHAT A WEIRD DREAM I had last night! One of the strangest dreams I ever had!

I dreamt I was in the West Wing of the White House sitting next to Jared Kushner. He had his stereo blasting “Hatikvah,” the Israeli national anthem.

I rose up from my chair, turned it off, and told Kushner, “You’re listening to a Czech song composed by Smetana, nothing Hebrew about it.”

He turned all red in the face, turned the stereo back on, and started blasting “Back In The USSR” by the Beatles.

I told him that the USSR no longer exists but a Christian Russia is re-emerging.

“Who cares about Christians?” Kushner replied. “I’m a Jew and Russians are a bunch of anti-Semites! And besides, Putin’s on our X list.”

“I just got off the phone with Chuckie Schumer and the Russia sanctions bill is a go!” Trump declared.

“You’re not going to veto it?” I interjected. “Why should I?” Trump replied…”my presidency is at stake if I do.” 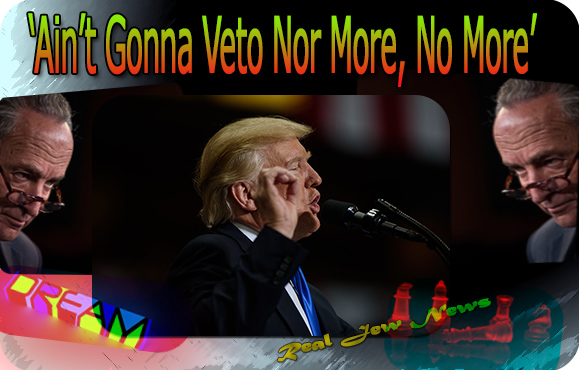 “BUT, BUT, WHAT ABOUT ALL YOUR PROMISES that we need to get along with Russia?” I insisted.

“And what about your recent meeting with Putin where you said we need to cooperate with each other?” I persisted.

Then Melanie appeared. “Din din’s ready,” she purred, “what would you like for desert, dear?”

“Mmm,” murmured Trump, “how about some marshmallows, dripping with melted chocolate truffles, soaked with pink custard, topped with kosher macaroons?”

Suddenly, I was jarred out of sleep with severe cramps. I rushed to the kitchen and poured myself a drink.

“Boy,” I said to myself, “whatever happened to leaders with a set of…” Then the phone rang.

I picked it up and a man’s voice asked, “Is Donald there?”

“Donald? There’s no Donald here,” I shot back.

“Sorry, “he said, “must have voted for the wrong number…”

“What do you mean, voted?” I demanded. But he had already hung up…

For More See: Dreaming Of A Trump-Putin Meeting Here