Dreaming At The Wailing Wall 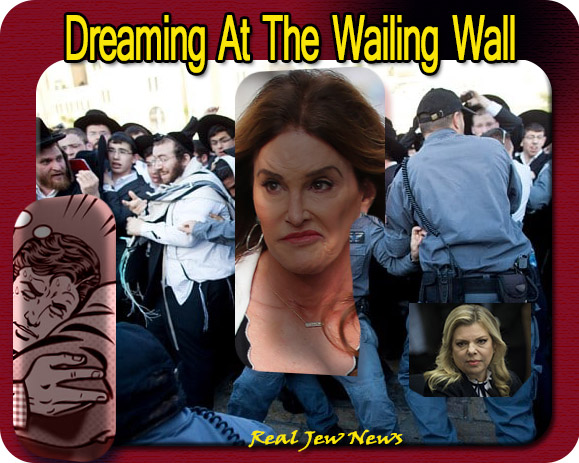 ONE OF THE WORST DREAMS did I ever have last night! I’m all shook up!

I dreamt I was on a plane to Tel Aviv and the stewardess was Sarah Netanyahu. She kept giving me the ‘evil eye.’ “Kinehora!” I shouted back.

Then she announced that we should honor all the American soldiers who were on board. I got up, looked around, and didn’t see a single one.

Pudgy little Sarah then pontificated, “These brave soldiers have risked limb and leg to bring democracy to Iraq and Syria. To our most cherished ally, America, and its noble soldiers, we citizens of Israel wish you, ‘Mazel Tov!’

Then what looked like someone who might have been a US soldier, (he didn’t look Jewish), stood up and shouted, “What the h##l does muzzle tuff mean?”

Suddenly the brakes screeched in Tel Aviv. I got off the plane and Golda Meir was doing a belly dance in the middle of Ben Gurion airport. She looked pretty hideous, her stomach all wrinkled up.

“Vel,” she said, “it’s Brother Nathanael, nu? I’ve watched a few of your videos and let me tell you, there is no God.”

“Then why do you keep quoting the Bible that God gave you the land?” I pried.

“We knew the goys would swallow it,” she smirked. 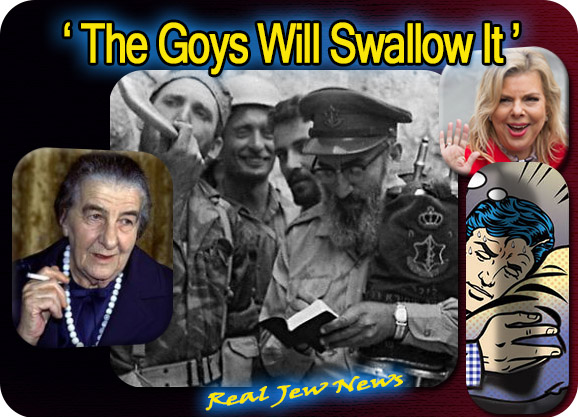 NEXT THING I KNOW I’m at the Wailing Wall and have to go through a metal detector.

“Take off your crosses,” the Kotel rabbi demanded. “No way!” I answered.

“Then you’re not permitted here!” he threatened. “I don’t care,” I said, “you don’t let women pray here either. You’re all a bunch of Jewish supremacists.”

Suddenly, a woman appears with manly features. I recognized him at once, saying to myself, “It’s Bruce Jenner in drag.”

Jenner came up to the metal detector, took his necklace and wig off, when the Kotel rabbi scurried up to him, and told him, (who the rabbi thought was a her), that ’she’ was forbidden to pray at the Wall. 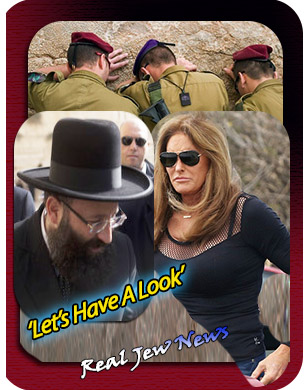 Tons of soldiers surrounded Jenner, lifted up his skirt, and one of them pulled out a microscope, and I, not liking the sight of it, shut my eyes.

“Hmm, looks strange,” I heard the soldier say. “Looks like a penis sewed into a slit.”

“Is it circumcised?” asked the rabbi?

“Can’t tell,” answered the soldier, “but everything down here doesn’t look too womanly.”

“Then he’s a man!” pronounced the rabbi, “put a kippah on his head and let him in!”

I’m watching all this when little Sarah appears again. She’s all dolled up in expensive jewelry with airplane tickets in her hand.

“I’m leaving on a jet plane, hope I don’t have to come back again, I like gay Paree, DC ain’t bad, and I’ve got the travel heebie-jeebies in my bag,” she crooned.

“I feel all hemmed in,” she replied, “and besides, there is no God.”

“What does God have to do with you not liking it here?” I inquired.

“If He was real,” she said, “He’d send every Israeli to hell. Thou shalt not steal and all that.”

I woke up all shook up.

I ran to the kitchen, poured myself a drink, and cried, “Thank God I’m NOT an Israeli!”

For More See: Satan At The Wailing Wall Here

And: Dreaming Of A Trump-Putin Meeting Here

And: Dreaming Of A Trump Veto That Wasn’t Here