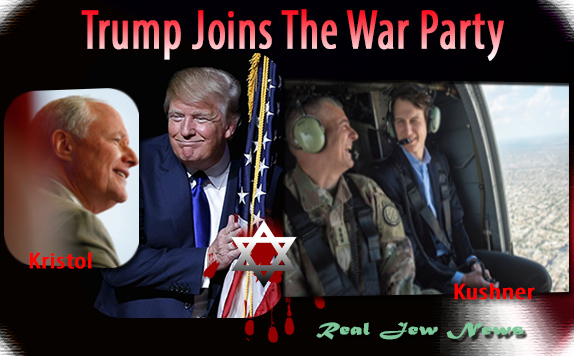 Yes indeed. Trump’s a war president and broke his promise to “keep us out of foreign wars.”

It wasn’t long ago that Trump told Reuters, “We should focus on ISIS, not Syria. You’re going to end up in World War Three over Syria if we listen to Hillary Clinton.”

But the sound of US bombs bursting in air over Syria’s Shayrat airfield gave proof through the night that our flag’s over there, not here, in the abandoned land of America First.

The Israel-Firsters at CNN, Capitol Hill, and AIPAC are proud of you.

Even Senators Sissy Graham and Maniac McCain have warmed to you. Kind of makes you feel all nuked over, doesn’t it? I mean, real warm and real fuzzy.

And Netanyahu thinks you’re the matzo ball king. Keep it up and you’ll be eating gefilte fish at his passover table!

You’ll be eating more than gefilte, dear Donald. For out your own mouth you warned Clinton backers that they’d be fighting not just Syria, but Russia and Iran.

That’s a recipe for a Bar Mitzvah catered by Schumer, Schiff, and Zeldin, where Goys are sent off to war while the Jews eat lox and bagels at home. (Jews don’t send their own off to wars abroad for Israel.)

You own that war now, Mr Trump, against the Russian bear and her allies.

Who’s going to eat your words when you spew them out into a nuclear holocaust? That’ll be the REAL ‘holocaust’ that your Jewish enablers will wreak upon the entire world. 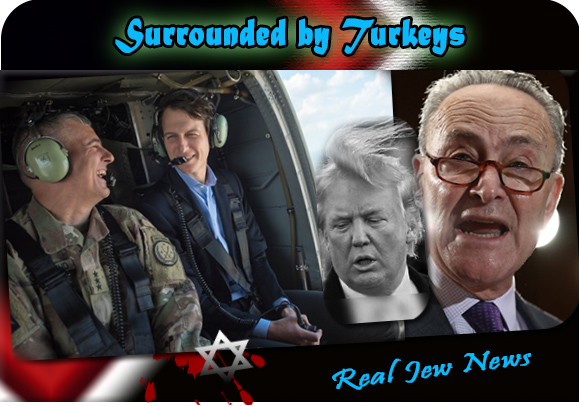 ALL YOU ‘GOYIM’ who send your sons to wars for Jews, you should’ve seen it coming:

But what really galls the heck out of meeself, is seeing the little Jew worm, Jared Kushner, in the driver’s seat and Steve Bannon sent to the back of the bus.

The Kushner family gave Trump his start in New Jersey, (couldn’t quite break into Jew York yet); funded his campaign from the get-go; and came collecting, putting sonny-boy as daddy-in-laws’ right hand man.

It’s a swamp out there.

How can America soar with eagles when surrounded by turkeys?

It can’t…when surrounded by war-mongering rats like Kushner & Tribe.