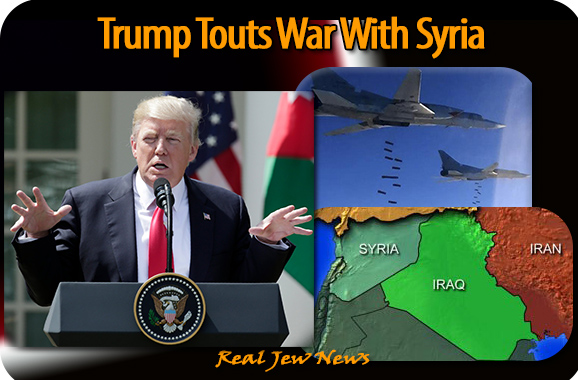 WHEN IN ROME DO as the Romans do, but when in DC do what the Jews want or your political career is over.

“We need to fix America rather than nation-building abroad,” said Trump in 2015.

But that all came to an end when Trump told reporters today that his attitude toward Assad and Syria has “changed very much.”

Jews have been pressing for full-scale war against Syria ever since Putin upended the Jew-enabled US policy of toppling Assad preventing Jewmerica from crippling the “Axis of Resistance” of Syria, Iran, and Lebanon’s military arm, Hezbollah.

And Trump plays the Jewish card to the Tee.

Accusing Syria of using “chemical weapons” in the Idlib explosion, he insisted that “these heinous acts by the Assad regime cannot be tolerated….when you kill innocent children that goes beyond red lines.”

Somehow, REAL facts on the ground don’t come into play when warmongering for the Jews.

All the hacks on Capitol Hill are just licking it up (for the Jews, like McCain) applauding Trump’s “tough talk” on Syria.

And never mind that Tillerson said that the agenda to topple Assad was over. He flip-flopped today saying that Russia needs to “rethink” its support of Assad.

But the bear doesn’t heed threats from a man who gifted the Boy Scouts with homosexuals to lead young teens. 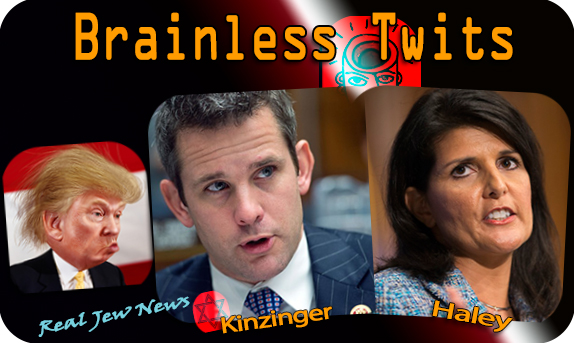 NEXT TIME YOU HEAR Trump complaining about “fake news” tell the traitor (or those who elected him) that he himself buys the Jew lies.

Jewry’s weapon, as owners of the media, is “fake news.”

The Syrian army denies any involvement. Moscow says the ‘gas attack’ resulted from the Syrian Air Force destroying a warehouse in Idlib where chemical weapons were being produced and stored by rebels before being shipped to ISIS in Iraq.

Assad himself asserted that there are “no chemical weapons left in Syria,” making it impossible that the attack could have stemmed from the Syrian government.

But when your political career depends on doing Jewry’s bidding who needs proof? What good are facts when Jews want war, huh Mr Trump? What happened to “America First?”

You meant “Jewry First” when telling supporters that America must “win again.”

“Win” for the Jews, but the Goys lose.

ENTER NIKKI HALEY, the brainless twit representing America at the UN, who barfed: “We are compelled to take our own action if the UN fails.”

And that “action” is being schemed by neocon Jew Congressman Adam Kinzinger telling Trump to “bomb Syria’s airstrips so as to ground its air force.”

Good idea! But since Russian planes use those Syrian “airstrips,” Kinzinger joins Haley as another brainless twit.

Does he think Russia will roll over and play dead? They’ve got bombs too that have been very effective in Syria and a few handy Surface-To-Air missiles.

Will Kinzinger’s children go to Syria to make sure “bombing airstrips” holds? No way. Jews don’t send their own to die in combat abroad.

For in wars for the Jews only the Goys die young.

And: How Rex Tillerson Corrupted The Boy Scouts Here

And: If Putin’s A ‘Killer, America’s A Butcher Here