The UN Teaches Israel The Law 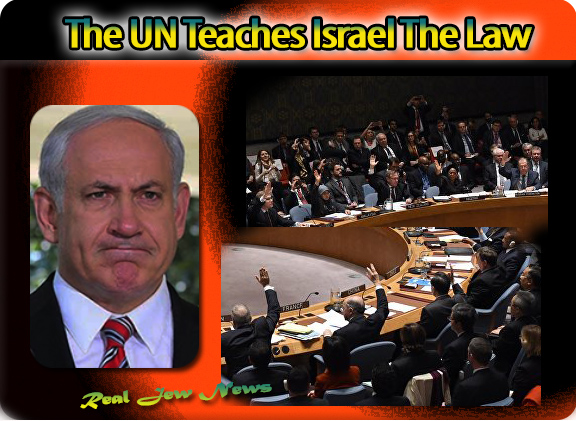 TWAS THE NIGHT BEFORE CHRISTMAS and all through the house the creatures were stirring and the Jewish State got a douse of damnation right in the snout.

And the assemblage of the family of nations burst into a round of applause.

Netanyahu called diplomacy a ‘conspiracy’ blaming Obama for scheming behind the world’s back to subvert the ‘pure and undefiled’ Zionist enterprise.

Somehow, with Obama’s conspiratorial activity hidden from all, England and France had their own conspiracy going, raising their hands in affirmation.

Then the Jewish organizations—(all ten thousand of them)—cried “anti-Semitism,” yet not one nation on the UN Security Council stirred nor caved to the Jewish mouse.

Bibsy threw a tantrum, recalled his ambassadors, and browbeat that seditious band.

Jewish threats work on Capitol Hill where Gentile shills depend on Jewish money to fund their campaigns, but UN Ambassadors lie outside the kosher belt.

They vote on policies based on “law”―as in “international law”―like the “Geneva Convention of 1949″ that forbids an occupying force from settling its residents in occupied territory.

But we’re dealing with ‘torah jews’ whose laws are conditioned by results.

It’s the Jewish plan of salvation:

Violate every law that exposes the Jew; defy international order; let Jews have it their way…even if it breaks the Ten Commandments…and you’ll go to Jewish heaven.

But the 14 nations who voted for the Resolution have a different plan of salvation: Apply international law to a rogue state that thinks it can get away with murder.

The Jewish hand was caught stealing the cookie jar. Theft is against the law.

Hurrah! For once the entire world said to the Jews, “Keep your stinking hands off!”

For More See: The No State Solution For Israel Click Here

And: ‘Price Tag’ Of A Jewish State Click Here