‘Price Tag’ Of A Jewish State 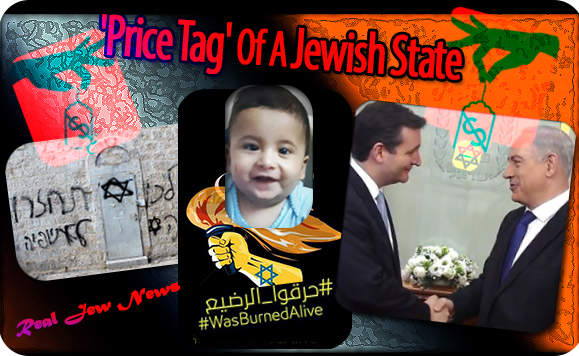 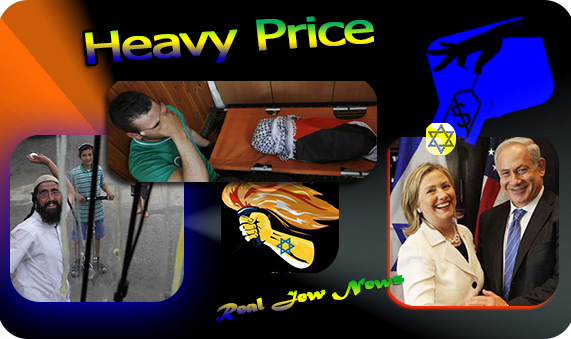 WHAT STATE has caused more misery than any other? The Jewish State of Israel.


The world has paid a heavy price—including the demise of America’s democratic process due to the dictates of the Jewish Lobby—ever since the Jewish State was conceived.

And now more “Jewish State’ misery, (hardly moving the consciences of the Lobby’s automatons on Capitol Hill), has left in its murderous wake the burned-to-ash body of a Palestinian infant in the occupied West Bank.

The savage act was the work of the Israeli settler-group known as “Price Tag” whose perverse mission is to make all who stand in the way of the Jewish colonization of Palestine “pay a price.” 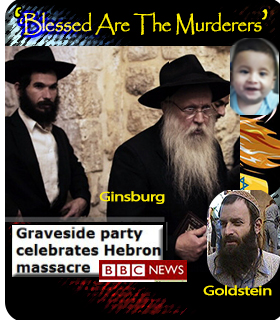 Most Price Tag attacks are carried out by at least 100 followers of American-born Chabad Lubavitch Rabbi Yitzhak Ginsburg.

Ginsburg, a dual citizen of Israel and the US, wrote the racist book Baruch HaGever (Blessed Man) in praise of mass murderer Baruch Goldstein who slaughtered dozens of Arabs as they prayed in the Ibrahim Mosque in Hebron 20 years ago.

As a disciple of Rabbi Menachem Schneerson, (the false ‘messiah’), Ginsburg furthers the teaching that while Jews are the ‘chosen people’ created in God’s image with every cell divine, the Gentiles lacking this status are considered subhuman whose souls are “satanic.”

In a call to terror, two ’settler’ rabbis associated with Ginsburg coauthored the Israeli book, The King’s Torah, which claims that the prohibition ‘Thou Shalt Not Murder’ applies only “to a Jew who kills a fellow Jew.”

Non-Jews are “uncompassionate by nature,” write the rabbis, and attacks on them “curb their evil inclination,” while babies and children of Israel’s enemies may be killed since “it is clear they will grow to harm us.” 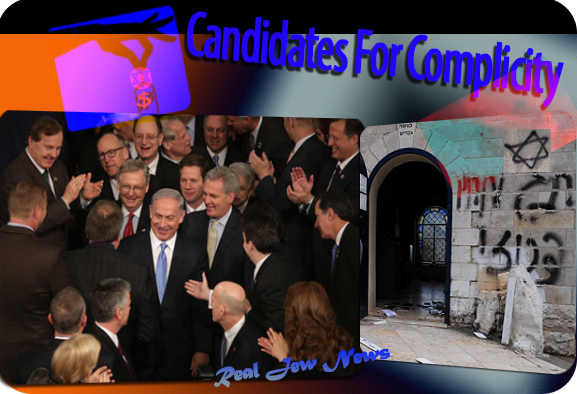 MURDER GETS A FREE PASS

BOTH MOSQUES AND CHURCHES are targeted by Price Tag which recently torched a Greek Orthodox Seminary in Jerusalem and the Church of the Loaves and Fishes in Galilee.

While arrests have occasionally been made in these anti-Arab, anti-Muslim, and anti-Christian hate crimes, no one has ever been convicted by the Israeli government, but rather, covering up for Price-Tag.

After a decade of arson, stabbings, and destruction of property against the Arabs, only when attacks started targeting Israeli Jews did Tel Aviv begin to voice threats of taking action against the militant settlers.

Netanyahu decried the murder of the Palestinian infant as an act that prompted a “fight against terrorism”…and his shills on Capitol Hill are pleased with his sapless disapproval.

One might ask, will Netanyahu’s slaves in Congress decry his terror in ordering the mass murder of babies and children in Gaza? (Don’t hold your breath.) 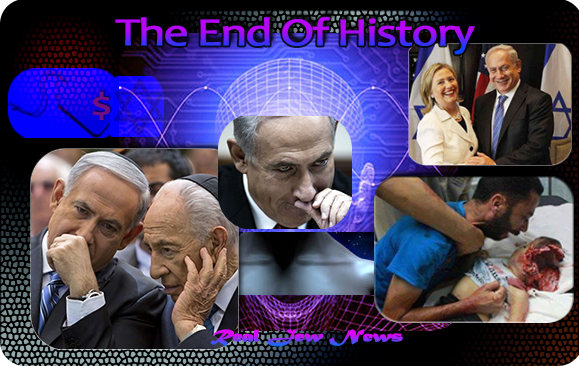 ON RECORD for censuring Price Tag’s assaults, Netanyahu has muttered, “It’s unsettling. Those responsible contradict our essence and values.”

Au contraire. Rather than contradicting Israel’s essence and values, the torching of the Palestinian infant by the Jewish occupiers is in total conformity.

For the essence of Israel is ‘Jewish,’ of which, on the physical side, is racist, and on the spiritual side, is anti-Christ.

Israel’s racism is proved by the fact that the only threat to its existence is democracy.

And Israel’s anti-Christ character is proved by its self-definition as a ‘Jewish’ state. For the denial of Jesus Christ is the spirit of anti-Christ.

REGARDING “VALUES” Israel holds, one finds himself unsettled at a discovery.

For if the barbaric murder of the Palestinian child “contradicts” Israel’s values, ergo Israel is pure of the blood of innocents, which is certainly not the case.

But if Israel has shown itself bereft of noble actions—instead, manifesting a history of murder and theft—then the torching of the child is consonant with Israel’s “values.”

There’s a price tag on wrongdoing. It buys a person (and a people) a seat in hell.

There’s also a price tag on complicity with wrongdoing. It buys a hack a seat on Capitol Hill.