The Hillary Fix Is In 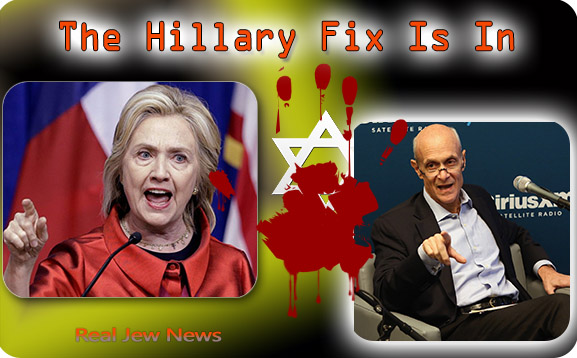 DEAR DIARY, looks like the world is caving in on Donald Trump.

For knowing that warmongering Jews run America’s security apparatus, I’m inclined to say that Hillary’s their gal and will do anything they can—and they’re capable of pulling off false flags and all kinds of crisis events—to get her in the White House.

Clinton’s a known quantity and they’ve had her on a short leash for a long time. Her stint at the State Department is proof enough she shills for the Jews.

Now, just this week a group of neocon Jew “national security experts” had their synagogue buddies at the Jew-owned press announce their Open Letter stating that as Republicans they “will not vote” for Trump.

“We are convinced that Trump would be a dangerous President and would put at risk our country’s national security,” wrote the wicked, warmongering Jews.

The top signers are Michael Chertoff - former head of Homeland Security; Eliot Cohen - former Counselor at State; Eric Edelman - former Under Secretary of Defense and Advisor to VP Cheney; Aaron Friedberg - former Deputy for National Security, and a bunch of goys whose jobs depend on sucking up to Jews. (View Open Letter Here.)

The fix is in. It’s Killary Clintonstein or bust. 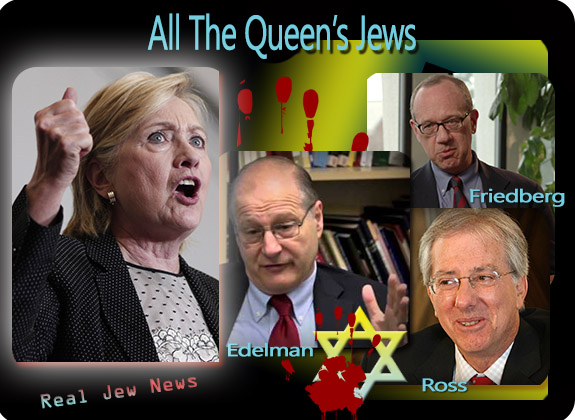 This was followed by the goy shill for Jew wars, Mike Morell, former acting director of the CIA, while endorsing Clinton, saying the US should kill Russians and Iranians in Syria.

Trump responded to all the Jew jazz with:

“They’re Washington establishment people. Look at the terrible job they’ve done. Look at the mess we’re in. Whether it’s the Middle East or anywhere else. I hadn’t planned on using any of them.

“They don’t feel relevant because of that so they form a group and try to get some publicity hoping that somebody other than Trump wins because that way they can get a job.” (View Entire Story Here.) 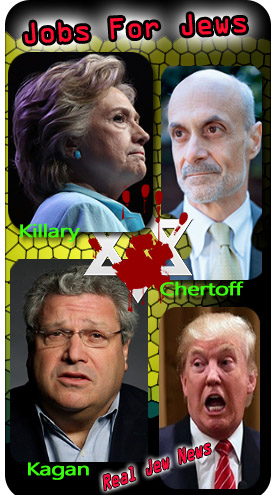 Trump’s pro-Israel, all right, and has his own people lined up for foreign policy, yet to this day he keeps on saying:

“If our country got along with Russia, that would be a great thing.

“If we can have a good relationship with Russia and help us get rid of ISIS, frankly, as far as I’m concerned, you’re talking about tremendous amounts of money and lives and everything else, that would be a positive thing, not a negative thing.” (View Entire Story Here.)

Oh, Donald! The Jews don’t wanna hear that! Russia is Jewry’s number one enemy, don’t you know that?

Putin purged the Rothschild money changers long ago and no Jew has real power in Russia’s resurrection of “Symphony of Church and State” where Jews are deep-sixed.

That’s why their lies, “Putin kills journalists who oppose him;” “Putin invaded Crimea;” “Putin sent troops to East Ukraine;” ad infinutum, are plastered all over the Jew-owned press.

(The Atlantic, once run by Christians who took an anti-Israel position, is now overrun by Jews like fatso Jeffrey Goldberg whose big mouth blathers with slanders of Vladimir Putin, a devout Christian.)

That’s why Hillary is saying all kinds of nasty things about Russia and Putin like, “Russia hacked into the party’s emails,” and, “Trump’s a Putin agent.”

Now the mustard’s on the matzah ball.

Bombing Assad, then Iran, on to bigger fish to fry by baiting China and Russia, puts Hillary on Jewry’s silk road to hell.

Yet, in spite of their plans, dear diary, I’m not too depressed about it. The future belongs to Russia not Jewmerica.

Allowing neurotic Jews to run a country is a very bad idea.