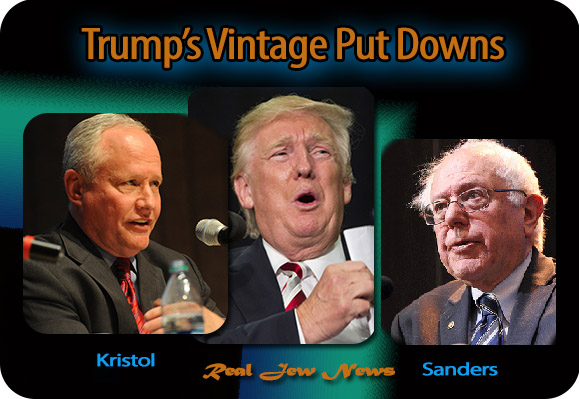 TRUMP’S ART OF THE DEAL may be a best seller but can’t come close to his ‘art of the put down.’

As Andrew Bacevich, a conservative Catholic, puts it, “the essence of American politics has been transformed into theater like some sort of (un)reality show.”

“Trump’s a fresh thinker,” says Bacevich, “yet his version of fresh tends to be synonymous with wacky, off-the-wall, ridiculous, or altogether hair-raising.” 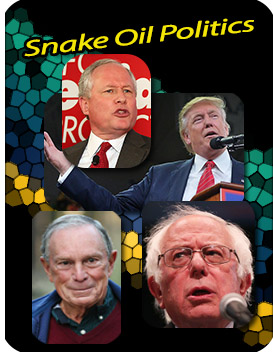 Trump’s off the wall barb, though failing to cut to the core of Bernie’s betrayal, had some snake oil in it so as to “raise” some of Bernie’s hair:

“What was amazing to me was when Clinton was talking about Bernie last night and the camera was on him, he was angry. It almost looks like Bernie has buyers remorse, like he shouldn’t have made the deal.”

Buyers remorse is one thing but viewers remorse is quite another, and that’s how Trump sized up Bill Kristol who worked overtime hoping to skewer Trump’s nomination:

“Why do you put this guy on television? He’s got no credibility. Said I won’t run, said if I run I won’t do well, if I do well or this or that. He looks like such a fool. Bill Kristol is a loser.”

And Trump’s no loser, that is, when he enters a boxing ring with mismatched contenders.

Trump’s right jab and left hook to Michael Bloomberg after trashing him at the DNC had NYC’s former Jewish mayor down for the count. Here’s the right jab:

“Little Michael Bloomberg, who never had the guts to run for president, knows nothing about me. His last term as Mayor was a disaster!” 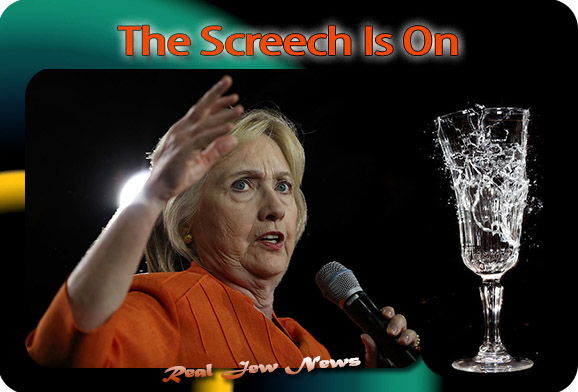 THE ULTIMATE DISASTER FOR MANY, a Hillary presidency, is ominously looming.

Trump’s warning speaks to the heart (and hands) of his gun rights supporters:

“It will be a horrible day if Clinton were elected. If she gets to pick her judges, nothing you can do, folks. Although the Second Amendment people — maybe there is, I don’t know.”

If it’s not a threat, it’s Trump shooting off at the mouth again, which sometimes can be so totally politically-incorrect that it scares people. (See Trump’s clarification Here.)

Yet even staunch ’second amendment’ pundits like George Will…who long before Trump’s latest gaffe denounced his Republican loyalties due to Trump’s ascendancy…would rather have the Bill of Rights torn to pieces by Hillary than see Trump in the White House.

“This is not my party,” whined Georgie Will to the Federalist Society, after the Republicans awarded the nomination to Trump.

Sounds more like Leslie Gore’s, “It’s my party and I’ll cry if I want to,” turned into, “I don’t like the cupcakes so I’m outta here.”

But Trump wasted no time giving the ‘party-departer’ a piece of his mind:

“George Will, one of the most overrated political pundits, who lost his way long ago, has left the Republican Party. He’s made many bad calls. You know he looks smart because he wears those little glasses. If you take those glasses away from him, he’s a dummy.”

And when it comes to looks, Trump was not too kind to former primary rival, Carly Fiorina:

“Look at that face! Would anyone vote for that? Can you imagine that, the face of our next president?”

Fiorina’s voice, in Trump’s ears, is just as bad as her face:

“I just realized that if you listen to Carly Fiorina for more than ten minutes straight, you develop a massive headache.”

But the put down award goes to Trump’s barb aimed at Arianna Huffington. It’s politics down and dirty:

“Huffington is unattractive both inside and out. I fully understand why her former husband left her for a man - he made a good decision.”

AND ANOTHER DECISION—election rigging notwithstanding—is left to every voter to decide who will make the best president.

Or Donald Trump whose barbs might make nightly news a “wacky” good time.

That’s what elections are all about. You can’t please everyone, but rest assured, one group will be pleased.

Both Trump and Hillary are giving the Jewish Lobby everything it wants.

Clinton’s been in Jewry’s pocket since day one.

So Trump ups the ante by vowing to move the US Embassy from Tel Aviv to Jerusalem, defying international law, which declares East Jerusalem part of Israel’s military occupation.

Trump goes further by promising US recognition of Israel’s planned annexations of key territories throughout the West Bank, again in defiance of international law.

And Trump’s a “law and order” man?

Hillary’s shriek or Trump’s put downs? No matter, the Jews always get their way.

Thank You Servants Of Jesus Christ