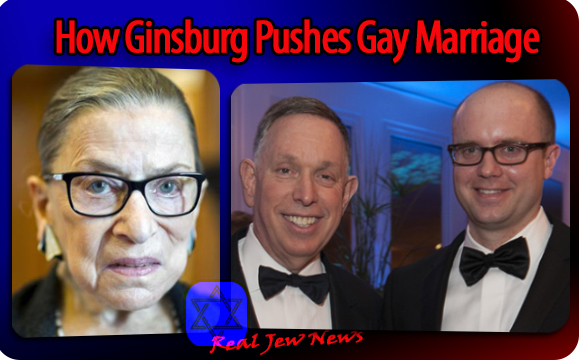 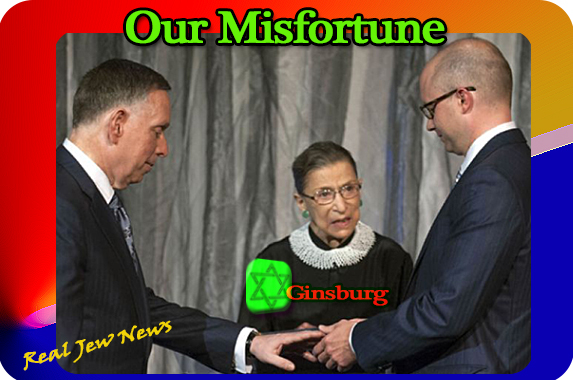 IF JEWS ARE OUR MISFORTUNE, then Supreme Court Justice Ruth Bader Ginsburg is Jewry’s chief architect of America’s woes.


In a clear violation of judicial protocol, Ginsburg told an audience at the University of Minnesota Law School that if the Sixth District Court of Appeals rules in favor of same-sex marriage, there will be “no need for us to rush” on a decision on the definition of marriage.

“If however,” Ginsburg added, the Court that covers Kentucky, Michigan, Ohio, and Tennessee “upholds” the centuries-old, natural definition of marriage as one man and one woman, “there will be some urgency” to “step in sooner.”

Liberty Counsel contends that Ginsburg violated the Judicial Code of Conduct since judges are not to make public comments on pending cases especially saying which way they would vote before hearing the merits of the matter. Thus Ginsburg should recuse herself from all cases that involve homosexual and lesbian marriages.

Mat Staver, head of Liberty Counsel, added that since Ginsburg has officiated same-sex marriage ceremonies she consequently brings her own personal experience to the bar which would compromise objective adjudication. 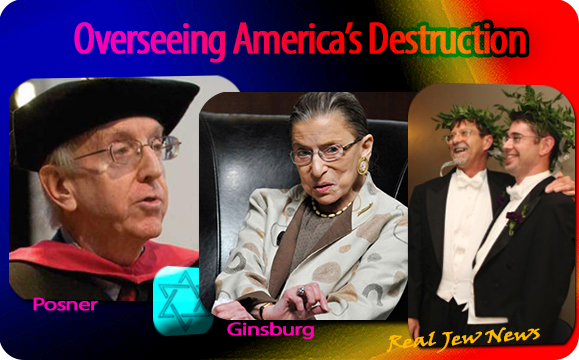 Staver cites Canons 2 and 3 of the Judicial Code of Conduct which explains that judges are not to allow outside influence to impact their judgment nor to make public comment on the merits of a pending or impending action.

“A judge should comply with the law and in a manner that promotes public confidence in the impartiality of the judiciary, the code reads,” says Staver. “A judge should not allow social and political relationships to influence judicial conduct or judgment.”

But what Staver doesn’t get, (Liberty Counsel is a Zionist-christian, Jew-loving legal lobby), is that Ginsburg is part of a “social and political” alliance—JEWRY—that agitates for the destruction of the White Christian family via homosexuality.

While Staver censures Jew judge Richard Posner of the 7th US Court of Appeals for ruling that marriage between a man and a woman derives from “a tradition of hate,” Staver fails to see that Posner—AS A JEW—assaults the Biblical definition of marriage.

THE ONGOING ASSAULT on God’s creational design for the perpetuity of the human race is a key component of Jewry’s dismantling of a White Christian power bloc that would oppose the Jew’s role in forming domestic policy and shaping our nation’s culture.

In a nation of sissies, fags, dykes, and queers, the Jew takes the upper arm of control.

And while Jews like Ginsburg and Posner wreak more destruction on our Jew-ruined nation….Zionist-christian dupes like Staver continue to worship the Jewish beast.