Holocaust Con Is On Again 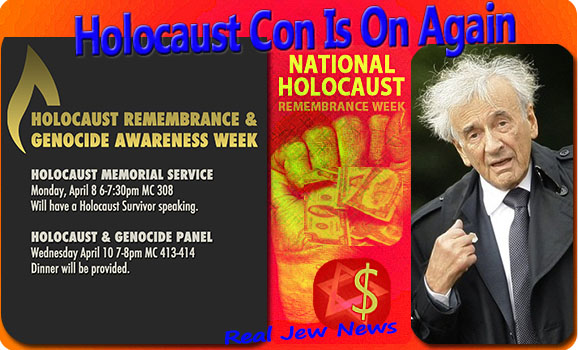 Holocaust Con Is On Again
By Brother Nathanael Kapner April 6, 2014 © 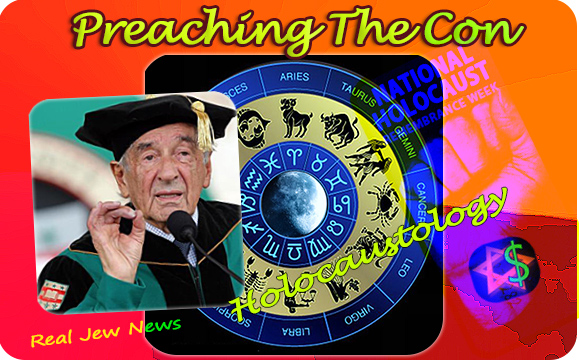 AS EASTER APPROACHES, when Christians reflect on the death and resurrection of Jesus Christ, the Holocaust Hoax will be in our faces once again.

Jews in Brooks Brothers suits and Calvin Klein dresses will shove down our throats their ‘Holocaust suffering’ that trumps the validated sufferings of tens of millions of Gentiles.

The Holocaust cash cow is also a primary kosher weapon used to blaspheme and denigrate the Crucifixion of Christ by Jewry obnoxiously setting themselves up as God.

Who better to dish out this kosherized version of martyrdom than the self-anointed High Priest of Holocaustology, Elie Wiesel? 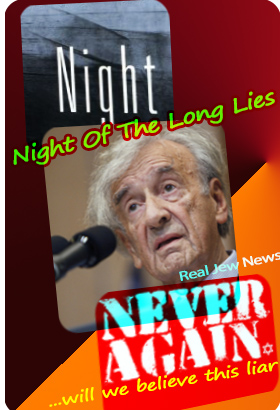 Wiesel’s notoriety is due to his problematic ‘autobiography,’ “Night,” which should be classified as fiction due to his cunning use of invented material.

He describes in “Night” the death of a young boy he claims to have seen hanged.

He writes that he heard someone behind him say, “Where is God now?” ‘And I heard a voice within me answer him:’ “Where is He? He is hanging here on this gallows.”

In this passage, Wiesel blatantly equates Jews with Almighty God by claiming that God in the form of a Jewish victim of ‘nazis’ was ‘crucified.’

Here again he deifies Jews with his Talmudic blasphemy:

“Never shall I forget those moments which murdered ‘my God’ (the Jewish boy) and turned my dreams to dust.”

Wiesel’s agenda here is not difficult to understand. The Jews desperately want all non-Jews to worship them as God on earth. 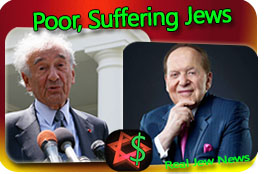 They want us to believe that only their ’suffering’ is unique — that it offers ‘redemption’ by making the world a ‘better place’ by reminding us of our supposed collective guilt that must be ‘atoned’ for.

We are saved by feelings of guilt over the poor mistreated Jews. “Never again!” die Juden wail as they continue to dictate their agenda in the Press, in the Oval Office, and on Capitol Hill.

Wiesel reminds us that “Every Jew somewhere in his being, should set apart a zone of hate - healthy, virile hate for what the German personifies and for what persists in the German. To do otherwise would be a betrayal of the dead.”

With Wiesel leading their “hate campaign,” Jewry claims to be God incarnate, Auschwitz becomes Calvary, and Jewish ’suffering’ supersedes all others, even of Christ Himself.

And with tax-payer-funded Holocaust Remembrance Week soon to be in our faces, the Goyim are forced to make their obligatory ‘atonement’ to the corpses of the Jewish dead.