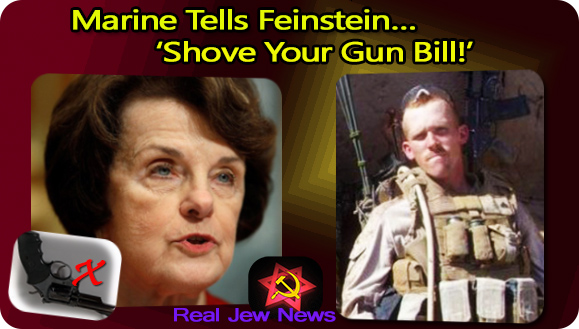 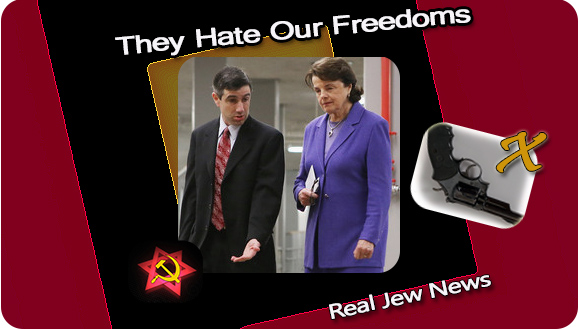 JEWISH SENATOR DIANNE FEINSTEIN is finally getting some well-deserved heat for her impending Gun Control Bill.


With her plan to introduce an Assault Weapons Ban Bill, Feinstein will implement a National Registry of ALL existing guns even of those owned PRIOR to her treasonous Bill.

The fact that Feinstein’s National Registry requires a complete BACKGROUND CHECK on owners of guns ALREADY legally-owned means that guns can be CONFISCATED if the background check doesn’t hold muster with Feinstein and friends.

Registration of Owner & Any Transferee

Now wouldn’t the likes of Lenin, Trotsky, and Stalin be very proud of Feinstein and her resurrection of the Jewish Bolshevik programme of total disarmament of the American proletariat? (She should be jailed for TREASON.) 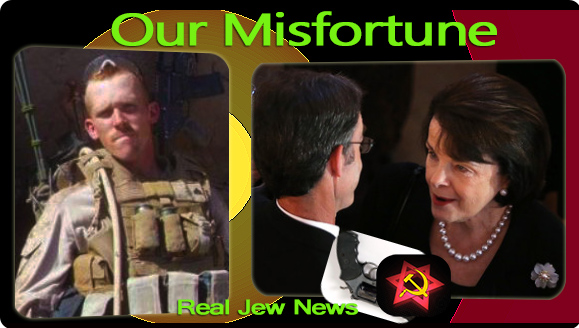 MARINE TELLS FEINSTEIN…
‘SHOVE IT UP YOUR…!’

After posting an Open Letter to Senator Feinstein at CNN’s iReport Site last week letting Feinstein know that he would not submit to her draconian law denuding him of his Second Amendment rights, Boston’s letter has now gone viral.

The veteran Marine, Joshua Boston, who was deployed to Afghanistan 2004 through 2005, informed Feinstein that he will NOT register his weapons nor does he believe Feinstein (and her ilk) has the right to require him to do so since he is not Feinstein’s “peasant,” but rather, she is subject to him and to all American citizens. Bravo!

The “No Ma’am’ Letter Of Ex-Marine Joshua Boston Reads As Follows:

I will not register my weapons should this bill be passed, as I do not believe it is the government’s right to know what I own. 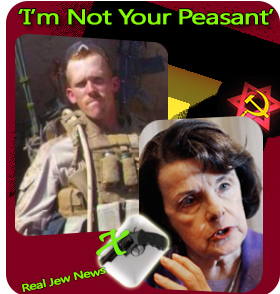 Nor do I think it prudent to tell you what I own so that it may be taken from me by a group of people who enjoy armed protection yet decry me having the same a crime.

You ma’am have overstepped a line that is not your domain. I am a Marine Corps Veteran of 8 years, and I will not have some woman who proclaims the evil of an inanimate object, yet carries one, tell me I may not have one.

I am the man who fought for my country. I am the man who learned. I am an American. You will not tell me that I must register my semi-automatic AR-15 because of the actions of some evil man.

I will not be disarmed to suit the fear that has been established by the media and your misinformation campaign against the American public.

We, the people, deserve better than you.

FINALLY, SOMEONE HAS THE GUTS to stand up to Feinstein and her co-religionists in their Jewish-driven agenda to trash the Second Amendment.

These members of the same tribe simply do not know when enough is enough.

For now with the New York Times publishing, “Let’s Give Up On The Constitution,” penned by Jewish professor, Louis Seidman, the cat is out of the bag: Jews HATE our freedoms.

Is it any wonder that the maxim, “The Jews Are Our Misfortune,” is gaining greater currency from month to month, week to week, and NOW, from day to day…