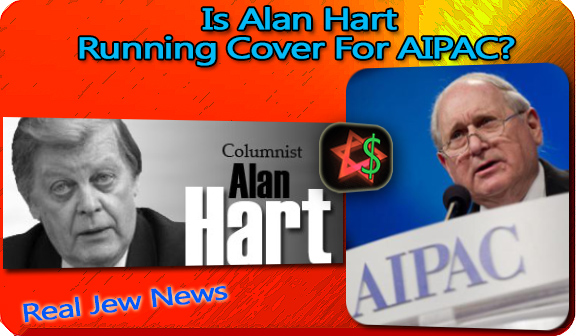 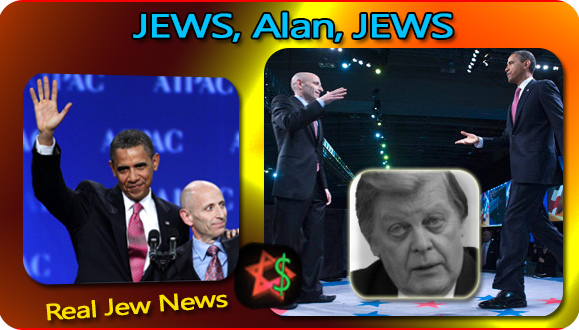 IS ALAN HART A JEW?… I don’t know if he is or not but he sure sounds like one.


In his latest piece, “Obama’s Hegel Test,” Hart just can’t bring himself to identify AIPAC as a “Jewish Lobby” but rather a group of individuals “made up of all faiths.”

I never knew that AIPAC was an ‘Inter-Faith Movement.’ Not once did I ever see an Episcopal priest or a Presbyterian minister pandering to the Jews on an AIPAC podium.

Hart would also have us believe that AIPAC enjoys the membership of Baptist Zionists, for these are the REAL so-called “Christian Zionists.”

What a joke! The Jews who fund, lead, and make up the operating body of AIPAC actually DESPISE Baptists dear Alan. I never saw Jerry Falwell or Pat Robertson headlining a single AIPAC Conference.

And any ‘GOYS’ associated with AIPAC (believe me, they’re NOT part of the funding or operating body) are either useful idiots, Gentile window dressing, or CRASS opportunists. 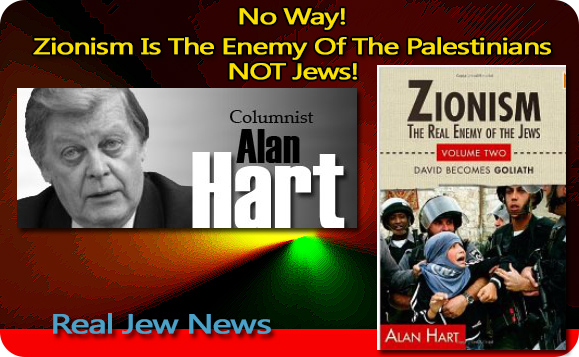 ALAN HART is an inconsequential author who penned the book, “Zionism: The Real Enemy of the Jews.”

My immediate response to the title was, “Is Alan Hart running cover for the Jews?” For MOST would agree that Zionism is the enemy of the Palestinians, NOT Jews.

This is why I suspect that Alan Hart is a Jew himself.

Hart’s central argument is that ‘Zionism is not Judaism.’ Again, is Hart running cover for the Jews? 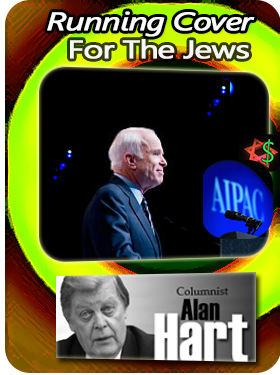 Believe me, for I grew up as a Jew, Zionism IS Judaism and Judaism IS Zionism. If not, then why did we declare at every Passover meal, “Next Year in Jerusalem!”

And why did we sing, “Hatikvah,” Israel’s national anthem, at EVERY Sabbath service?

Was it because Judaism is NOT Zionism? No way! Mr Hart is fooling us all.

Alan Hart’s piece revolves around Obama’s pending nomination of Chuck Hegel as Secretary of Defense who once said, “the Jewish Lobby intimidates a lot of people in Congress.”

Hart quotes Jewish shill, Senator McCain, who in response to Hagel replied, “I know of no Jewish Lobby.” And neither does Hart. For Hart argues that AIPAC does not represent all Jews.

FACT IS, (for I grew up as a Jew), MOST Jews DO INDEED support AIPAC, if not overtly, then tacitly.

Your run of the mill Jew (if there is such a thing) is very careful not to let the Goyim know that his allegiance is FIRST to Israel and NOT to America.

And those few Jews who don’t agree with AIPAC’s agenda would rather keep their views to themselves.

Why offend their fellow tribe members? Why get kicked out of the synagogue? You can count on one hand courageous Jews like Gilad Atzmon who vociferously oppose the power of AIPAC, that is, the JEWISH Lobby.

BOTTOM LINE: The intimidating power of BILLIONS of dollars, media influence, and the organizational track, finds JEWS at the very center.

To advance the lie that AIPAC is only marginally connected to the Jewish community is a deceptive ploy to let American Jewry, whose loyalty is to a foreign nation, off the hook.