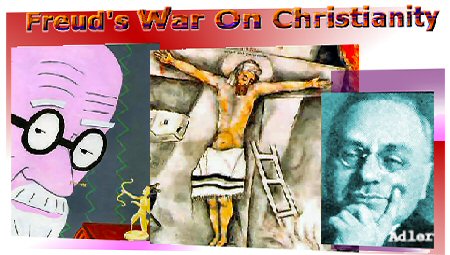 Freud’s writings were informed by his strong sense of Jewish identity and his negative bias against Christian culture which he viewed as the source of Anti-Semitism.

But Jews have perceived “Anti-Semitism” to exist in all of the host nations that have received them since their act of Deicide in 33 A.D. regardless of their religious world-view.

Freud’s “psychoanalysis” is pejoratively known as the “Jewish Science.” It was rightly destroyed in Germany, Italy, and Austria, but lamentably, exiled throughout the rest of the world, including Christian America. The vanguard of the movement has remained to this day predominantly Jewish as it was from its very inception.

Ever since the Enlightenment when Jews began to appear out of the ghetto, (would that they had remained there!), Jewish intellectual activity has been hell-bent on subverting Christian culture. (”They are enemies of the Cross, ” St. Paul asserted.)

Indeed, it was Freud’s own view that psychoanalysis should appear both shocking and subversive. On board ship to America, the Jew Freud did not feel he was bringing America a new panacea. With his wretched Jewish wit he told his travelling companion, “We are bringing America the plague.”

FREUD’S BOOKS WERE BURNED (and rightly so) in the May 1933 book burnings in Germany.

Carl Christian Clemen, a professor of ethnology at the University of Bonn, reacted strongly to Freud’s Anti-Christian book, The Future of an Illusion, in which Freud analyzed religious beliefs, (Christianity was Germany’s “religious belief!”), in terms of infantile needs and what Freud designated as the “Oedipus Complex,” a male child’s desire to murder his father in vying for the sexual attention of his mother.

Clemen decried the psychoanalytic tendency to find sex everywhere, even in the innocent mind of a little child, a tendency which he attributed to the Jewish composition of the movement.

Freud defined himself as “a fanatical Jew,” an avowed “Zionist,” who identified himself with the elitist Jewish social grouping in that unique cause of “doing battle against the enemies of the Jews.” But the true enemy of Christian culture and especially in America is Freud and his continuing apostolic succession of Jewish “social scientists.”

THE JEW FREUD had wrought his Anti Christian wreckage in America by the fourth decade of 20th Century U.S. history.

It is a shame that America allowed this miserable Christ-killer Freud to enter our shores. In 1956, a Christian psychiatrist writing in The American Journal of Psychiatry complained, “Is it possible that we are developing the equivalent of a secular church? A secular church supported by government monies, staffed by a genital-obsessed apostolate, dispensing a broth of atheism, hedonism, and perversion?” (See History of the Jews; Johnson)

JEWS LIKE FREUD are our misfortune. Is there a final solution this Jewish menace? Yes there is.

Jews must become Christians. There is not to be any tolerance towards the Jews for they will not reciprocate in kind, as history and current events prove. Jews are obsessed with sex, perversion, and the promotion of the same. Can we not see this in the Jewish-owned Hollywood, Television, and Madison Avenue advertising?

We must insist on the end of Judaism as a racist idea and be relentless in converting them to the Jewish Messiah, Jesus Christ. Then we must teach these renegades how to become good and decent Christians.