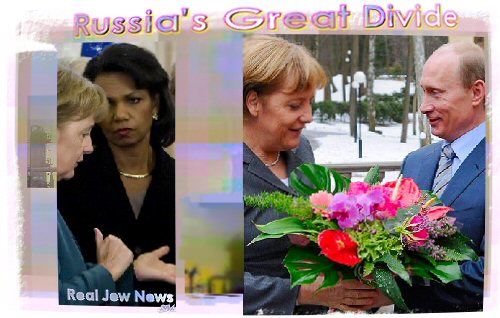 Unique Source: The Waste Of Superpower @ Rense.com Here
A “GREAT DIVIDE” IS NOW taking place in European-US relations. This is sharply evinced by the following report from Bloomberg.com News:

“On September 16 2008, German Chancellor Angela Merkel & Vladimir Putin engaged in discussions regarding joint energy projects soon after the US criticized a gas pipeline being built by the two countries.

Merkel’s chief spokesman Ulrich Wilhelm reiterated Germany’s support for the planned Nord Stream Pipeline from Russia to Germany after the US called for the project to be reconsidered. Highly significant are Wilhelm’s remarks: “We have made it clear that we support this project for political reasons.”

Michael Wood, the US Ambassador to Sweden, called upon Europe to consider alternative energy routes that reduce its dependence on Gazprom. The German Foreign Ministry protested to the US embassy in Berlin that it was “irritated’” by the comments.

On September 18 2008, Putin met with former German Chancellor Gerhard Schroeder, who chairs Nord Stream, at the Black Sea resort of Sochi. They both affirmed that the Nord Stream Project would supply consumers throughout the EU with much needed fuel supplies, in spite of protests from the US” Here Here & Here.

IN HER FIRST MAJOR SPEECH on Russia since the Georgian conflict, Condoleezza Rice had some rather harsh words to say about Russia on September 18 2008:

“The US and Europe have to stand up to Moscow’s bullying and keep Russia from benefiting from its military move into Georgia. Russian leaders have the attitude that if you pressure free nations enough, if you bully, and threaten, we will cave in. The US and Europe must stand up to this kind of behavior.

Russia’s leaders will not accomplish their war aim of removing Georgia’s government. Our strategic goal now is to make it clear to Russia’s leaders that their choices are putting Russia on a one-way path to self-imposed isolation and international irrelevance” [Yeah, right] Here.

But the France’s Foreign Minister, Bernard Kouchner, in sharp contrast to Rice, in an interview with France-Culture radio on the same date as Rice’s speech, said that “the world should not expect Russia to pull out of Georgia’s two breakaway provinces anytime soon.” Kouchner’s comment was the clearest sign yet that Europe recognizes that Georgia will not regain control of South Ossetia or Abkhazia. 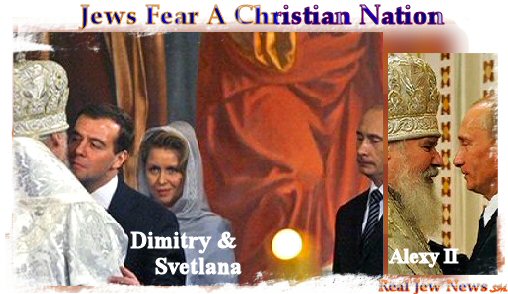 HAVING GROWN UP AS A JEW, I understand that Jewry fears nothing more than Christian nationalism. This is why the Jews continue to vilify Russia and Vladimir Putin.

I have no doubt that Jews took very close notice of one of Putin’s early speeches upon his election to the presidency of Russia in 2001. Soon after his election, Putin and the Patriarch of the Russian Orthodox Church, Alexy II, paid a visit to Solovetsky monastery north of Moscow.

Here is an excerpt of Putin’s speech in which he outlined his vision for a ‘Christian Russia’ & hinted at Russia’s new foreign policy:

“Without Christianity, without the Orthodox faith and culture which sprang from it, Russia would have hardly existed as a state. If God saved all nations, that means that all are equal before God.

This simple truth became the basis of Russian statehood making it possible to build a strong and centralized multi-ethnic state and a unique Eurasian civilization.

Besides glorifying the Russian people, besides cultivating the national dignity and national pride, our spiritual teachers taught us to respect other nations. Ancient Orthodox teaching is free of chauvinism or any ideology in its relation with other nations in God’s purview.

It would not hurt to remember this today. These are exactly the moral values which should form the backbone of both domestic and foreign policy” Here.

Bravo Dear Vladimir, Bravo!
Can You Come To America & Be Our Next President? Please?…