Iran: Another War For The Jews? 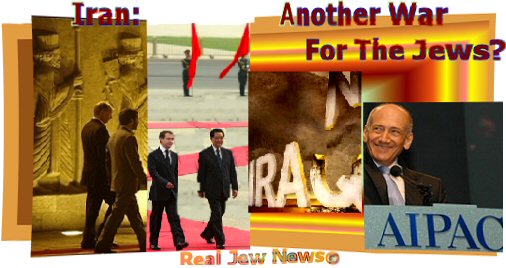 IRAN: ANOTHER WAR FOR THE JEWS?
By Brother Nathanael Kapner, Copyright 2008-20111

Or Send Your Contribution To:
Brother Nathanael Kapner; PO Box 547; Priest River ID 83856
E-mail: bronathanael@yahoo.com
JEWS ARE BRINGING AMERICA to the brink of disaster by beating their war drums against Iran.


Israel’s Prime Minister Ehud Olmert and a gang of 5000 Jews at the June 2008 AIPAC Conference are stoking the fires in order to bring America into a disastrous war. And the Jewish Neocon American Enterprise Institute recently called for a “pre-emptive strike against Iran.”

Here is what the Jews are saying:

These sanctions include cutting off refined oil imports to Iran; an increased US fund freeze on Iran’s state-owned Bank Melli; and pushing for the Jewish sponsored The Iran Counter Proliferation Act.

American Enterprise Institute: In September 2007 this Jewish Neocon ‘Think Tank,’ stated that “the world must consider war on Iran.”

In December of 2007 China signed an agreement with Iran to develop its Yadavaran Oil Field. China, with veto power in the UN Security Council, has resisted pressure from the US to impose sanctions on Iran. China’s search for energy resources to meet rising consumption is now centered on Iran’s rich oil resources which they would be hard pressed to surrender.

In March of 2008 it was announced that Iran will buy 100 airliners from Russia which doubtless will include a military venue.

The Jews who run the Council On Foreign Relations in America have noted that Russia’s flow of conventional weapons into Iran has taken place over the past 7 years.

QUESTION: Is the China-Russia-Iran Axis evincing a common agenda against the US?

Is all of this activity, in spite of US sanctions against Iran, demonstrating that the US is being played?

AIPAC IS USING ITS JEWISH INFLUENCE ($$$) to push through the Jewish sponsored The Iran Counter Proliferation Act. This Bill would subject Russia to specified prohibition actions against Iran unless Moscow suspends its nuclear assistance and transfers of missiles to Iran.

But rather than fostering Russian cooperation - the Bill will indeed strengthen Putin’s resolve to assist Iran. And evident to anyone with half a brain, US sanctions on Iran have had a no effect whatsoever.

— “China and Russia propose that the Iranian nuclear issue be resolved through equal consultation. All parties should consider global security and refrain from military means.” —

How Can We Stop A Very Possible Global War?
I Recommend That A Christian Consensus
Against The Anti American Jews Be Initiated Now!

And: “How The Jews Are Destroying America” Click Here