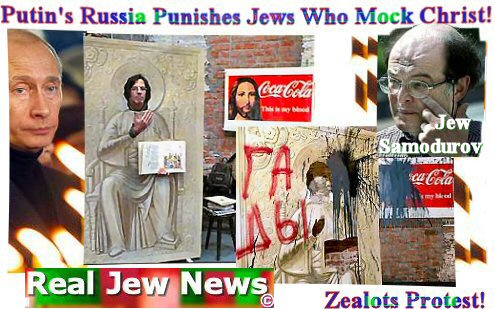 
Both were found guilty of “insulting the religion of Russia.”

Samodurov, Manager of the Sakharov Art Center in Moscow, and Mikhalchuk, the artist of the Center’s exhibition, “Beware Religion,” attempted to defend the exhibit’s depiction of Jesus Christ promoting Coca Cola and an Orthodox Christian priest presented in a ridiculing manner.

Orthodox Christian zealots protested the Christ-mocking exhibit and justifiably defaced the mocking depictions of Jesus Christ and the Orthodox priest. Samodurov and Mikhalchuk called the police and charged the zealots with “vandalism.”

But it all turned against these vile Jewish mockers of Jesus Christ. For the Moscow Court found them *guilty* of “insulting the faith of Russia.” They were both then fined $3,500 each. The judge told the profaners that they were fortunate not to have been given a two year sentence as well.

And: “Russian Artists On Trial” Here 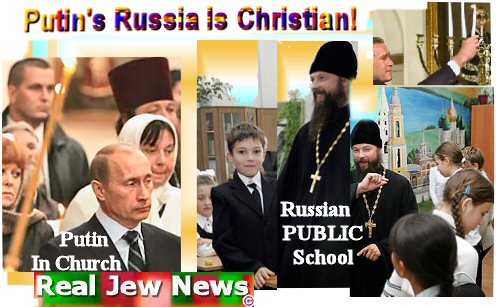 VLADIMIR PUTIN WAS RECENTLY ASKED to comment Here on a chapel being built in the Moscow City Court and the Office Of The Prosecutor General. Putin replied in a clever manner, “Of course we have separation of State and Church in Russia. But in the people’s soul they’re together.”

In August of 2007, a group of Russian Jewish scientists Here and Here (Scroll Down To 2nd Article) protested to Russian President Vladimir Putin that the “Foundations of Orthodox Christian Culture” should not be taught in Russia’s public schools.

Vladimir Putin responded to the scientists shortly afterwards in a public address in the Kremlin to Russian Orthodox priests Here saying, “Orthodoxy has always had a special role in shaping our statehood, our culture, our morals.”

Bravo to Vladimir Putin! Russian Public schools indeed continue to offer Orthodox Christian classes Here to the youth which include “church chores” in the curriculum. And when the Jewish scientists confronted Putin on the Christian classes he would not give an inch!

But what do we have in America? Videos promoting homosexuality and lesbianism to public school children! And a President lighting Hanukah Menorahs! Never will you ever see Vladimir Putin even near a Hanukah Menorah!

And: “Putin’s Plan To Foil The Jews” Click Here