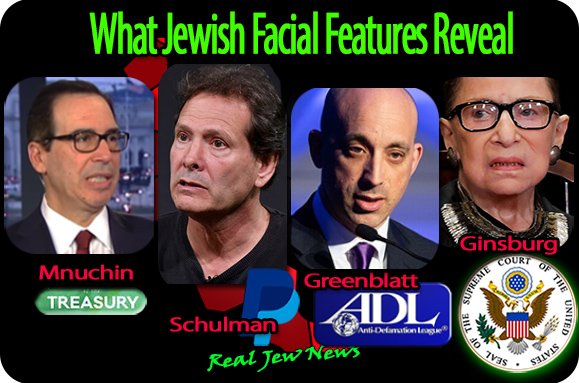 IT”S A STRANGE PHENOMENA… or perhaps better said, a peculiar physiognomy whereby the facial features of the Jew reveals a particular character.


A cursory glance at celebrated Jews brings to the eye a frightful specter, that is, it brings into view a noxious inner personality and a degenerate spiritual condition.

One particular aspect exhibited in certain Jews is the fold and corners of the lips.

Take Ruth Bader Ginsburg for instance. Quite often a crooked mouth is on display.

What in her innermost being is manifested in her lower face?

Perhaps since she touted a pro-homosexual line prior to the Supreme Court ruling that eviscerated the Defense of Marriage Act, and had officiated at least one homosexual wedding prior to the Court’s ruling that legalized same-sex ‘marriage,’ and yet did not recuse herself from both cases, thus her mouth exhibits a supplanted evenness of justice.

Why didn’t she do the just thing and recuse herself from both cases?

Because ‘justice’ means ‘just us’ for the litigating Jew but contempt for the moral norms of prevailing opinion. 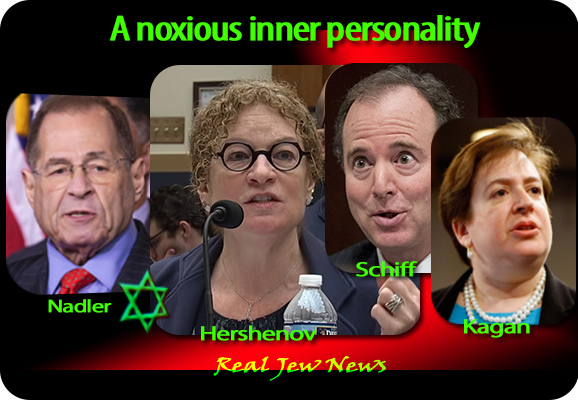 THEN YOU HAVE Jonathan Greenblatt of the ADL, who along with Eileen Hershenov, ADL’s policy director monitoring ‘online hate,’ oversees the censorship of YouTube.

While claiming to protect the defamation of Jews he uses his role at YouTube to restrict legitimate concerns of whites and valid opposition to the genocidal deeds of Israel.

Is this not a two-sided determination whereby Greenblatt’s crooked mouth reveals an uneven polarity?

As for Eileen Hershenov, her visage exhibits a fanatical viciousness, and sadly, this malignity is used to censure, restrict, and ban all opinions on Google and YouTube that Hershenov the Jew disagrees with.

Is this why she looks so disagreeable?

This demonized fanatic sees everyone as a ‘nazi’ except for the Jews. 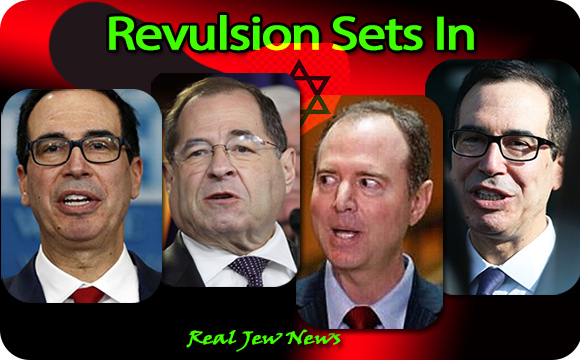 EXAMINE THE FACE of Steven Mnuchin of US Treasury. Again, the outward man reveals a parasitic inner psyche with the spirit of a bottom-feeding carp.

Can anyone say Mnuchin really works for a living?

While pretending to protect the hard-earned money of US taxpayers he instead upends our overseas trade by heaping sanctions upon sanctions on viable trading partners abroad. Is this not a clear case of deception that creates a contrary jaw?

There is also a peculiar deformity in his facial features as it is with many other Jews.

TAKE ADAM SCHIFF and Jerry Nadler as examples. One winces upon gazing (who can do it for any length of time?) on their faces, and a certain repulsion is registered within.

With Nadler, a gruesome hideousness is manifest which brings to the fore his ugly political maneuverings.

As for Schiff, with his bulging eyes and martian-like shape of his head, a particular revulsion lights upon the senses. Who is not revolted at his appearance? Who is not repulsed by his slithery methods we’re subjected to day after day in his Russiagate bullsh#t?

As for Daniel Schulman, owner of PayPal, who with his pinched, miserly facial features, he uses his payment services to ban those who don’t align with his promotion of sexual deviancy—(Jews are the biggest pushers of homosexuality, lesbianism, and trans-genderism so as to destroy Christian social responsibility and morality)—a crookedness appears on his lower lip that unveils the perversity of his trajectory.

I wish I could be lovey-dovey but I refuse to give Jews a free pass.

A Study In Jewish Faces Here

The Travesty Of Justice Ginsburg Here

Riders On The Storm Here