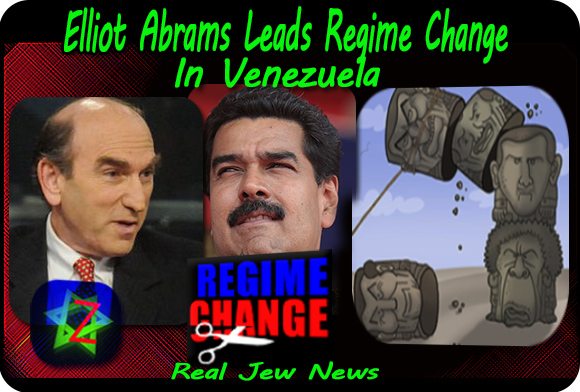 ONCE A NEVER TRUMPER, Elliot Abrams is back, this time doing regime change in Venezuela, ‘Jewish-style.’


He’s come out of the shadows, officially doing what he’s already been doing under cover with Pompeo at State, that is, fast-forwarding in 2019 his former scheming of the failed, attempted Venezuelan coup in 2002 under Bush in the hopes of toppling Hugo Chavez.

Now he’s lending his sullied hands to yet another ‘Dirty War’ in Latin America. He’s experienced!

Trump snubbed him when making up his cabinet due to Abrams’ OpEd in May 2016 titled When You Can’t Stand Your Candidate after Trump clinched the GOP’s nomination.

How is it that Abrams wormed his way into the Trump camp? Like all Jews who wait in the back alleys of the Beltway they slither their way out of their holes and worm their way up to the top of the ant hill.

Pompeo announced on Friday that Abrams, neocon Jewish warmonger, has joined the State Department team to “restore democracy” in Venezuela and “assist the people” in achieving the outcome that “America wants them to achieve.”

It’s one thing to restore democracy and quite another to assist people who already have it.

And it’s a treacherous thing to shove down the Venezuelan people’s throats something they don’t want.

THE MAJORITY of Venezuelans including the military and police are fully behind their current and legitimate president, Nicolas Maduro.

And with Venezuela’s Minister of Defense denouncing the self-proclaimed ‘president’ Juan Guaido as a “US puppet who wants to rule Venezuela from Washington,” the dirty hands of Abrams have a glorious neocon-Jew opportunity to use the puppet to sow chaos, bloodshed, and misery once more.

Abrams is good at that. His role in the ‘dirty wars’ of Latin America in the eighties as Assistant Secretary of State for Human Rights when he whitewashed a massacre of a thousand men, women and children by US-funded death squads in El Salvador, appears to have whetted his appetite for even further nastiness.

You don’t ever want a Jew sticking his nose into ‘human rights.’ All you’ll get is ‘human suffering’ instead. 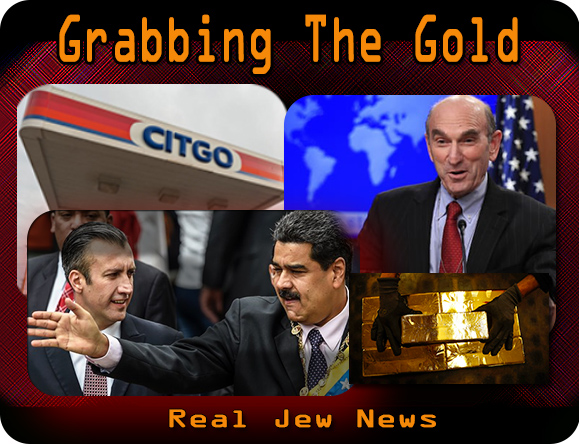 AMERICA’S NEW BOOGEYMAN of the neocon Jew agenda, Nicolas Maduro, was democratically elected as President of Venezuela in 2013 and 2018.

But oil speaks volumes when bringing democracy beyond America’s borders by a Washington engineered coup and by funding malcontents willing to make a dirty buck and keep America at the top by crushing any competition.

It’s not about Maduro, it’s about seizing Venezuela’s oil assets because Abrams was part of a plot to overthrow his predecessor Hugo Chavez back in 2002 for that very same reason.

As of early 2019, 500,000 barrels per day of Venezuelan crude—essential to American diesel production—were being imported to the United States.

Added to the inter-connected malaise is that Citgo, a refiner based in Texas, is owned by Venezuela’s national oil company, Petroleos de Venezuela.

Now looking to fall into Abram’s hands, Maduro vows to defend the company from a Washington-engineered takeover.

THUS WHEN POMPEO was asked about the Maduro administration’s overseas assets, he said, “We will announce how Juan Guaido (self-proclaimed president of Venezuela) will have the resources he needs to lead the Government of Venezuela forward.” (Ugh.)

At present, the Jewish-owned Bank of England refuses to release the $1.5 billion gold bullion they are holding belonging to the government of Venezuela, so the Brits who once ruled the seas are now plunged under the cesspool of the global Jewish thumb.

Abrams, pushy Jew that he is, will ratchet up pressure on the Maduro government, (the Jew-owned media now calls it “regime”), including imposing heavy sanctions on its oil sector that will worsen the crisis and increase the suffering of the Venezuelan people.

Perhaps Trump hasn’t full control of his administration when you see how this Jew Abrams who trashed Trump during his campaign finagled his way into the State Department to hold the reins of regime change in Venezuela.

Yet it’s clear as day that Pompeo, Bolton, Pense, Mnuchin—with Trump’s approval—have been working on Venezuela regime change for 8 months ever since Maduro was re-elected.

Do we really want to get bogged down in another military quagmire abroad leading to civil war, civilian deaths, and the demolition of yet another country’s infrastructure all in the name of “restoring democracy,” Jewish style?

Ask Abrams who has a talent for sending goys to die in wars for the Jews.

Has Trump Fired Bolton Yet? Here

The Face Of John Bolton Here