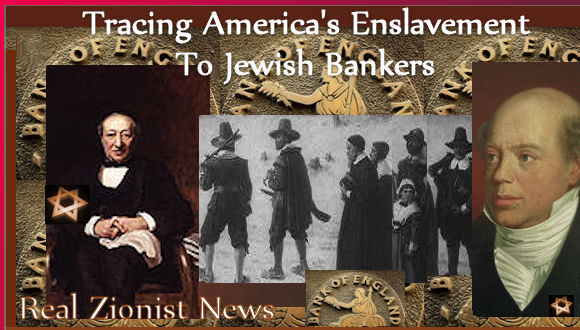 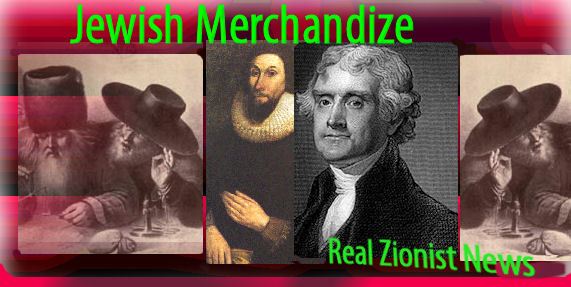 
The early American colonists of the 17th Century were beholden to the Bank of England’s Jewish owners — paying taxes from their labor — as repayment for funding the “opportunity” to create a new way of life in the New World.

Struggling to be released from the burden of debt to the Bank of England, the colonists established the Massachusetts Bay Company, printing its own home-grown paper money in 1690, a currency not backed by silver or gold.

In other words, it was a fiat money, rejected by England’s parliament, in a continual conflict with their American subjects regarding taxes and all other debts. 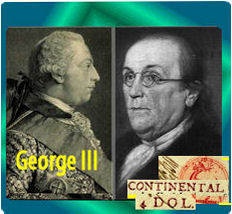 By 1742, with every colonial Royal Governor instructed to curtail the issue of colonial money, the British Resumption Act required that taxes be paid in gold. This caused a depression in the colonies - property was seized by the Royalists for one-tenth of its value.

Benjamin Franklin, a supporter of the colonies printing their own money, stated in his autobiography, that the main cause of the Revolutionary War of 1776 was not the tax on tea or the Stamp Act but King George’s refusal to accept the paper money of his subjects. View Entire Story Here.
By winning the war in 1783, the colonists took control of their own government.

Yet, America remained in debt to the Jewish owners of the Bank of England, which by this time included the Rothschilds, Montefiores, Goldsmids, Mocattas, and the Oppenheimers, (all powerful Jewish families with control of the gold trade), led by Nathan Mayer Rothschild. View Entire Story Here, Here, Here, Here & Here.

The ‘united States,’ in spite of the historical propaganda we are forced-fed with, was NOT free. 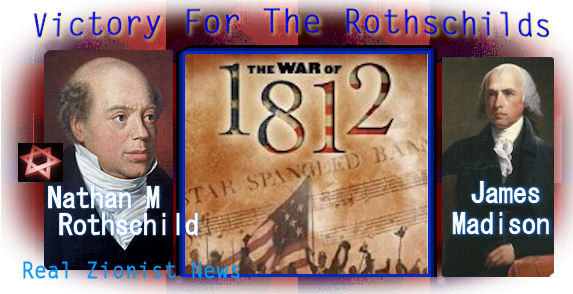 THE COLONISTS MAY HAVE WON THE WAR but they were still in bondage to the Jewish Bankers.

Reeling under the debt, the united States re-introduced taxes to pay off their Jewish masters.

Thus, Alexander Hamilton, agent of international Jewry, pressured Congress to pass the 1791 Assumption Act — which created America’s first national bank, the First Bank of America, chartered by the private Bank of England for a term of twenty years — in its plan to control the monies of the so-called “independent” united States.

In other words, in creating this bank, America was forced to charter it with the same Jewish bankers that were holding its debts before the “war of independence.”

In 1811, the twenty year contract with the Bank of England expired. The struggling new nation refused to renew the charter with its attendant enslavement.

In response, England waged war with America in what we now call the War of 1812. The Brits invaded Washington DC burning down the White House, the Treasury Department Building, and the Library of Congress.

Although “court historians” claim that America “won” the War of 1812, it actually lost it.

The accumulated debt as a result of this war dictated the creation of a new central bank by European financiers. Thus, in 1816, President James Madison was compelled to sign into law the Second Bank of the United States. And again, it was chartered by the private Bank of England which held 80% ownership.

And so, America’s enslavement to Jewish bankers continued for yet another 20 years.

FOUR YEARS BEFORE the charter was set to expire in 1836, President Andrew Jackson vetoed its renewal putting the Rothschilds and their fellow Jews out of business in America.

Jackson not only asserted the unconstitutional minting of US money by private interests but also had the brains to fix the problem.

Although now misunderstood by economists such as Lyndon LaRouche and associates, for the greater good of America, President Jackson sent federal troops into the states who refused, (albeit indirectly), to pay off the debt to Jewish bankers, forcing those states to collect taxes. View Entire Story Here, Here, Here & Here.

For seventy-seven years, although argued that Jewish financing of America’s railroads and gold trafficking kept the nation under Jewry’s thrall, America was no longer under the heel of Jewish bankers. Andrew Jackson, remarkably…federal force notwithstanding…paid off the debt.

But sadly, to America’s tragedy, in 1913 the privately-owned Jewish consortium slavery apparatus, the Federal Reserve Bank, was signed into law by Jewry’s shill in the White House, Woodrow Wilson.

This pawn of the Jews, Wilson, obeying his Jewish masters, imposed the ‘Jew-tax’ upon Americans, the “Income Tax,” to pay for the coming “advances” with accruing interest made to the US government by the Jews of the Federal Reserve.

And to this day, the tie between the Federal Reserve and the Central Bank of England under the dictates of international Jewry grows ever stronger with its attendant manipulation of America’s and England’s domestic and foreign policies acting in concert with each other. 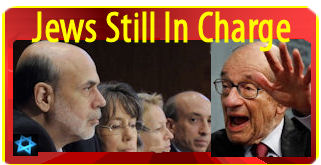 The chief agitators of America’s new central bank — intimate associates of the Rothschild banking dynasty — were Jewish foreigners who ingratiated themselves into American citizenship: Paul Warburg, his brother Felix, and Jacob Schiff.

Testimony to the bank’s abiding Jewish control, today’s Federal Reserve remains dominated by Jews who oversee and fund at interest all the affairs of our tyrannical State.

Behind the congressional puppets stands the Money Master — the Jew — sick, neurotic, carnal, haters of Christ, the cause of world unrest ever since Jewry was granted civil authority in Europe during the so-called Enlightenment.

In both Alan Greenspan’s and Ben Shalom Bernanke’s chairmanships, as well as in the bank’s locus of power New York branch, Jewish names fill the list of players. Gentiles placed in high positions of the Fed are simply window dressing designed to drape Jewry’s preponderance and mastery of America’s monetary affairs. View Entire Story Here.

As Thomas Jefferson once said, “Slavery to a military force can be abolished by an opposing force of arms. But a debtor’s enslavement to a creditor, no weapons can overthrow…”

And: Woodrow Wilson - Pawn Of The Jews Click Here