My Open Letter To President Putin 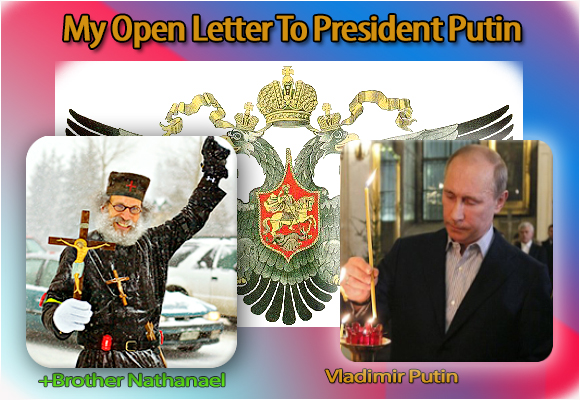 DEAR PRESIDENT PUTIN… with Paul Craig Roberts’ request to become a Russian citizen being well received by Moscow, I also feel inspired to make a request of you.

Unlike Roberts, I have not been accused of being a ‘Russian agent’ by the Washington Post but I have been accused by the Anti Defamation League of being a “virulent anti-Semite.”

That’s pretty hard to pin on me since I was born of Jewish parents and raised in the synagogue. I can even read Hebrew since I went to Sabbath School growing up Jewish.

Many Jews agree with me regarding pernicious Jewish influence here in America. Four Jews became Orthodox Christians through my ministry. My bishop met two of them.

I was the first to defend you against the media’s smear campaign starting with The Difference Between Putin and Obama. And I foresaw that you would make a major impact on world affairs with my How Putin Will Change The World.

You’re my brother in Christ, dear Vladimir, as I am a fellow Orthodox Christian with the Russian Church. (As much as I admire Paul Craig Roberts, he cannot make that claim.)

HERE IS MY REQUEST…

Would you invite me to Russia to conduct my Street Evangelism? I hold up the Cross on median strips across America including 9th and Pennsylvania in DC and Times Square.

That would be a great honor. Especially if I could do it in Red Square where the Bolsheviks once claimed a faux victory.

But our trophy is the Cross. And Russia, unlike America, honors Christ, not His enemies.

For More See: The Religion Of Vladimir Putin Click Here