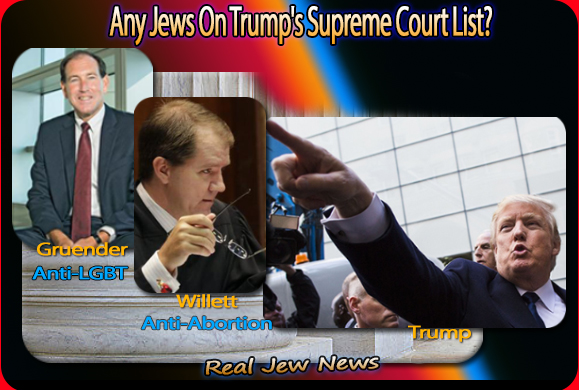 DEAR DIARY, a thought crossed my mind today as I brooded over all the Jews that have infiltrated our courts.

That particular thought, although politically incorrect, is that Trump’s list of potential appointees to the Supreme Court appears to be judenfrei.

Not a Ginsburg, Kagan, or Hurwitz-sounding name in the bunch.

Instead, nice Christian names like Gruender, Kethledge, and Hardiman grace the list. Aah, how soothing to the ear.

And what’s particularly soothing is that one of Trump’s picks, Judge Don Willett of Texas,
pushed
to keep a monument of the Ten Commandments on public property and the words “under God” in the Pledge of Allegiance, issues he has promoted on his Facebook page.

And on that page, Willet begins by stating, “religious liberty is imperiled.”

Imperiled by Jew judges Elena Kagan (a lesbian); Ruth Bader Ginsburg, Steven Breyer, and Sonia Sotomayor (her mother a Sephardic Jew), all who voted against Hobby Lobby, a Christian company, which refused to pay for abortion-inducing drugs vis-a-vis ObamaCare.

William Pryor is another good pick.

Currently a federal appellate judge, Pryor called Roe vs Wade, “the worst abomination in the history of constitutional law. Not only is Roe unsupported by the text and structure of the Constitution, but has led to a morally wrong result. It has led to the slaughter of millions of innocent unborn children.” 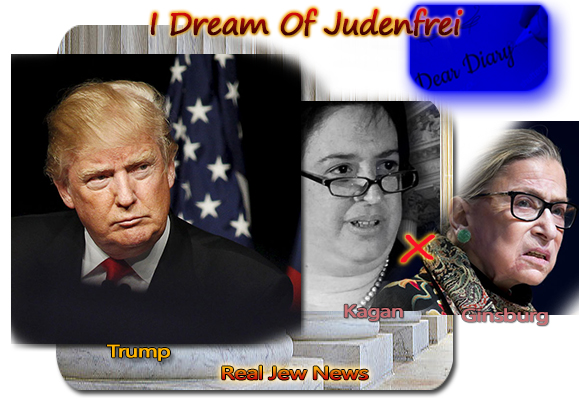 WHEN DONALD TRUMP announced, “My replacement for Justice Scalia will be a person of similar views and principles. This will be one of the most important issues decided by this election. The politicians have talked about it, I’m going to do it,” the Jew-owned press jumped all over him.

Jews love Hillary’s abortion stance. Why not? Like their father the devil, Jews are murderers from the beginning. I mean, Jews pushed through Roe vs Wade.

AND so, dear diary, I feel good that Trump hasn’t a single Jew on his list.

Wait a minute, he does.

David Stras, a Jew on Minnesota’s state supreme court, is on Trump’s list.

“I dream of Jeannie with the light brown hair,” sang Stephen Foster.

Those dreams are over. But one can still reminisce.

For More See: The Travesty Of Justice Ginsburg Click Here

And: Can Trump Get The Black Vote? Click Here