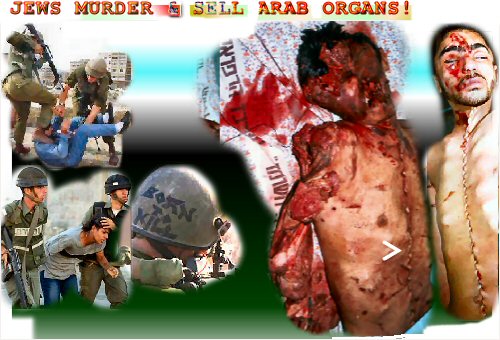 ORGAN TRAFFICKING IS NOW a multi-million dollar business. Couple this with the Zionists having an obsession for self-preservation and the Jewish Talmud’s view of Arabs being sub-human, Israel emerges as a leading trafficer in the organ transplant business.

The University of Tel Aviv’s Israel Institute for Forensic Medicine, operating under the cover of DNA profiling of “criminals,” (murdered Arab Palestinians), is the prime operator in the organ transplant business.
SEE: Arab Corpse Profiling

Here is what the Talmud says about all non-Jews: “Murdering a Goy is like killing a wild animal.” Sanhedrin 59a; “All Gentile children are animals.” Yebamoth 98a; “The seed of a Goy is the same as the seed of a beast.” Kethuboth 3b

AN EX-ISRAELI ARMY OFFICER, a Geldaya Gadi, was recently arrested in Brazil on suspicion of belonging to an International human kidney trafficking ring. Gadi told the court that Israel financed organ transplants in other countries due to the lack of organ donors in Israel. “The Israeli government is aware of the traffic in organs for patients in its country and pays for all transactions through state funded health plans,” Gady told the court.
SEE: Israeli Organ Agent

The Israel Institute of Forensic Medicine made Scotland news not long ago in the incident of a Scottish tourist in Israel, a Mr Alastair Sinclair, who was said to have “hanged himself” in an Israeli jail. (He was arrested on false charges). The lab not only performed an autopsy on Sinclair but removed a vital organ from his corpse as lucrative “merchandise.” It all came to light when the family of Sinclair found the body returned to them without a heart.
SEE: No Heart (5 paragraphs down).

TAKING A JOB IN ISRAEL in 2002, a Ukranian man died there of poisoning by a tainted alcoholic beverage (even though all domestic sources insist that he never drank.) The body of the unfortunate worker was returned to Ukraine for burial. The body of the man came back missing its heart. 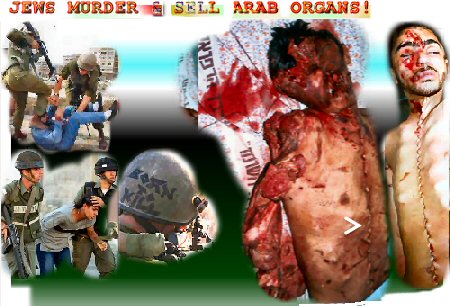 — “I couldn’t say for sure that something like that (taking out the organs) didn’t happen,” said Dahhan. —

Israeli authorities normally detain the bodies of murdered Palestinians for a few days without any explanation. on December 30 2005, Palestinian newspapers reported that the Israeli Army killed three Palestinian teenagers near Khan Younis in unclear circumstances. The army issued conflicting reports on the killing while Palestinian sources charged that Israeli troops murdered the three unarmed boys in cold blood.

Shortly before the burial of the three Arab teenagers on January 6 2005, Palestinian medical authorities examined the bodies and found that their kidneys, livers, and hearts were missing from their bodies. The Israeli and Zionist-controlled media have completely ignored the scandalous affair.
SEE: Stealing Arab Organs

SOMETHING MUST BE DONE to stop the Zionist crimes. We cannot allow the so-called “chosen people” continue their inhumane treatment of those whom they call “beasts.” The idea of the Jews being the “chosen people” is a Zionist myth. Christians, that is, those who have the same faith as the patriarch Abraham in trusting in God and not themselves, are the true “chosen people.”

This is why Jews must give up their Zionist racism and become Christians. Thousands of us who are of Jewish extraction have embraced Jesus Christ as the Messiah and He has changed our lives. We must not tolerate an Anti Christian Zionism any longer. Let the Zionists embrace Jesus Christ and start acting like people truly chosen of God!
–
Brother Nathanael Kapner…Street Evangelist!