The Jewish Mafia & Their USA Bankers 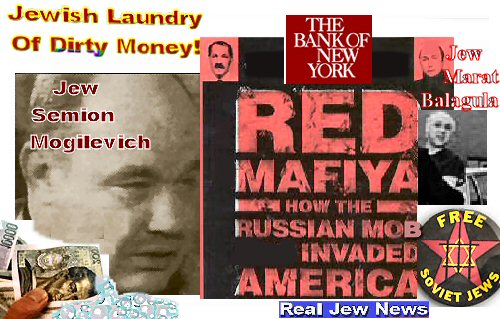 Sources: The Jewish Laundry of Drug Money, Israel Shahak; Red Mafiya: How the Russian Mob Has Invaded America, Robert I. Friedman.
“FREE SOVIET JEWRY!” was a slogan plastered all over America by the Jews from 1970 to the year 2000.

The late Senator Henry Jackson, who was bought by the Jews, spearheaded in his 1974 Jackson-Vanik Amendment, the Jewish agenda to tie trade agreements between the US and the Soviet Union to “freeing” Jews Soviet persecution.

What the Jewish Media did not tell Americans was that the Jews were the originators of the Soviet system, its prime beneficiaries, and its prime persecutors of Russian Christians.

Word soon got around that there was a “Russian Mob” in America. But no one dared say that the “Russian Mob” was in fact a bunch of “Russian Jewish Criminals.” 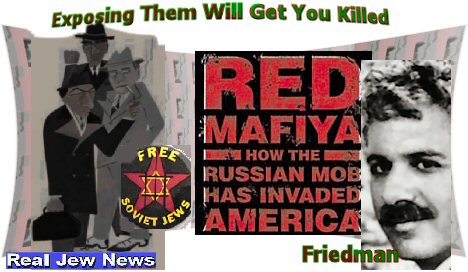 UNCOVERING THE RUSSIAN JEWISH MAFIA WILL GET YOU KILLED

The major figure in uncovering the Russian Jewish Mafia in America was a journalist named Robert I. Friedman who died in 2002 at the age of 51 from a so-called “tropical disease.”

In his book, Red Mafiya: How the Russian Mob Has Invaded America, Friedman interviewed major underground Russian Jewish figures and uncovered their criminal activities in the USA.

In fact, the FBI, according to Friedman, is loathe to go after Russian Jewish mafia figures because of intense pressure, (and $$$ to key officials), from the Anti Defamation League (ADL). The ADL persuaded the FBI to call off investigations saying that it would “foster anti-Semitism” and bias Americans against genuine “Soviet-refugees.”

Marat Balagula: Born in 1943 in Odessa Ukraine. Amassing a large fortune in the Soviet black market, Balagula at the age of 37 moved from Odessa to NYC under the Jackson-Vanik Amendment.

Balagula opened up a restaurant in the Brighton Beach Brooklyn area and named it “The Odessa.” Soon Marat Balagula had hundreds of Russian Jewish “employees” who had nothing to do with his restaurant business.

Semion Mogilevich: Born in 1946 in Kiev Ukraine. In the early 1970s he became part of the Lyubertskaya crime group in Moscow. Just prior to this, Mogilevich had built a lucrative prostitution ring in Israel and in Eastern Europe.

ON SEPTEMBER 21 1999, Congressman James A. Leach, Chairman, Committee on Banking and Financial Services, led a full scale investigation of Russian Jewish Mafia money laundering that led to a dead end:

We will begin with an examination of recent allegations that corrupt Russian groups and individuals have infiltrated Western financial institutions. The banks must co-operate with our efforts and be our first line of defense against criminal enterprises seeking to launder their illicit proceeds by entering them into the legitimate financial system.

The US must ensure that our financial institutions do not contribute to or facilitate corruption abroad.” —
For The Full Text See: Click Here

THE RUSSIAN JEWISH MAFIA WORKS WITHIN
THE JEWISH COMMUNITY

The Russian Jewish Mafia operates within the Jewish community. Gentiles must understand that Jews have a common interest between themselves for their self-survival. And it is upon $$$ that the Jews depend.

And what can American Christians do about the Russian Jewish Mafia and their Bankers? It begins with the knowledge that not only are the Jews pulling their propagandizing-fleece over American eyes, but fleecing American pocket-books as well!