Jewish Eugenics And The Master Race

JEWISH EUGENICS
AND THE MASTER RACE

NO OTHER DOCUMENT IN WORLD HISTORY has done more in creating a political class with a distinct racial agenda than the Balfour Declaration.


Succumbing to Jewish pressure in the midst of WWI due to its need for funding from Jewish banks, Britain surrendered its autonomy and eventually its empire when a letter addressed to ‘Lord’ Walter Rothschild from British Foreign Secretary, Arthur Balfour, was made public:

“His Majesty’s government view with favour the establishment in Palestine of a national home for the Jewish people, and will use their best endeavours to facilitate the achievement of this object…” View Balfour Declaration Here.

The key visible figure maneuvering the British government into this commitment was Jewish chemist, Chaim Weizmann, who rose to prominence in England for developing a method of producing acetone from maize which was needed for the production of artillery shells.

Weizmann, like many of his Jewish co-religionists, promoted the initiative to transfer all Arab residents out of Palestine in spite of contradicting the Balfour Declaration’s proviso insuring the “civil rights of existing non-Jewish communities.” 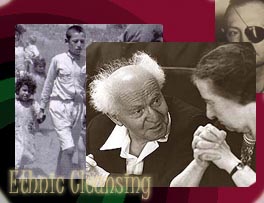 The ethnic cleansing of Palestinians (and the ethnic perpetuation of Jewry) was now in place.

By 1930, specific plans for “the transfer of Palestinians” were refined by leaders such as Ben-Gurion, Golda Meir, and Moshe Allon. Meeting for years on a biweekly basis in the “Red House” in Tel Aviv, these leaders agreed on the ‘necessity’ of carrying out the following steps:

With their plan fulfilled all that was left for International Jewry to embark upon was to ensure the maintenance and propagation of their ‘master race.’ 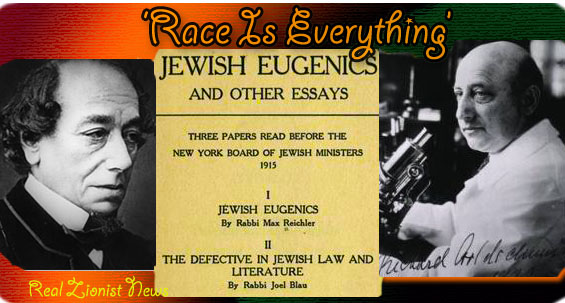 AS AN ARDENT ZIONIST, Benjamin Disraeli, late 19th century prime minister of England and a converted Jew to Christianity, exalted in the destiny of Jews as a “race.”

Building on the foundation of Disraeli’s racial views, key Jewish figures during the makings of the Balfour Declaration and long before Hitler’s rise to power, proposed a “eugenics” program to ensure “racially healthy” reproduction among their own: “the best of people.”

Jews played an active role in early eugenics from 1916 thru 1947. Names such as Rabbi Max Reichler, Richard Goldschmidt, and Hermann Muller, were part of a movement that praised the Jews for being of “uniquely superior stock” and possessing a “native endowment of brains.” 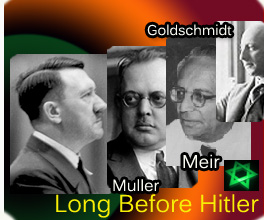 According to the National Library in Jerusalem, between 1920 and 1950, some two hundred Parents’ Manuals for Jewish couples were published in Palestine. These publications contained a Zionist worldview of which eugenics formed an integral part, subjecting Jewish mothers to an unremitting program of education, indoctrination and regulation.

One of the most prominent Jewish eugenicists of this period was Dr Joseph Meir, for whom the hospital in Kfar Sava is named, exhorted his co-religionists in 1934 to embrace the idea of racial engineering:

“For us, eugenics as a whole, and the prevention of the transmission of hereditary disorders in particular, is of even greater value than for all other nations!” View Entire Story Here, Here & Here. 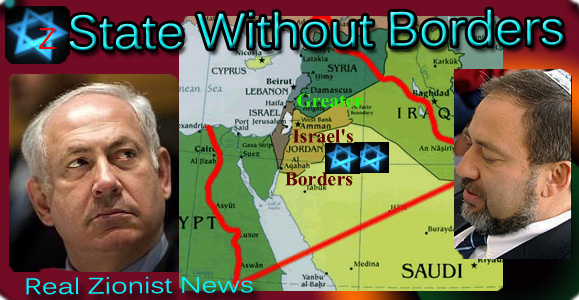 TODAY’S STATE OF ISRAEL, under a politically correct veneer, still practices eugenic-inspired family planning with more fertility clinics per capita than in any other nation.

When Israel declared itself an official State in 1948, Jewry no longer saw itself primarily as a “religious group” but also as a “political-racial” entity.

Thus the state of Israel defines itself as a “Jewish state” — not religiously, but racially. Any Jew who can prove his birth from a Jewish mother regardless of whether he goes to synagogue or not can instantly become a citizen of Israel.

Every state wants to expand its power for political reasons.

But for Israel, (in its quest for a Greater Israel), with Palestine being the crossroads of Europe, Asia and Africa — as its strategic center for world control — is doing what no other state throughout history has ever done before.

And that’s to ever-expand its frontiers so as to advance though a nuclear-armed military the anti-Christ cause of a Jewish borderless entity spread throughout the world. And that’s scary…