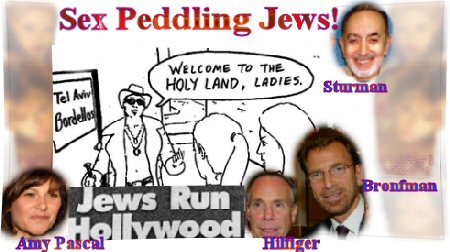 JEWS ARE PEDDLING sex around the globe. The hub for the trafficking of Jewish-sponsored prostitution is the Zionist State of Israel which the Evangelicals say is a fulfillment of Biblical prophecy!

Amnesty International, in its 2005 Report on Discrimination Against Women in Israel says:

——- “In the wake of large scale immigration to Israel, links between prostitution traffickers in Israel and former Soviet republics. Some 3,000 to 5,000 women are brought annually into Israel and forced to work as sex workers.” ——-

FOR THE LAST 125 years Jews have also controlled organized prostitution in Europe, the United States, and South America.

——- “In Eastern and Central Europe, Jews dominated the international prostitution traffic that networked to North and South America, to India, Greece, and Europe. Jewish pimps preyed mostly on non-Jewish women. Many of the Jewish underworld figures saw no gap between their prostitution trafficking and their religious lives. A Warsaw thug, Shlomo Letzsky, organized a synagogue for Jewish madams, and pimps. This criminal community even had a rabbinical court to settle disputes between pimps.” ——-

In America, the Jew Reuben Sturman was a multi-million dollar pornographer operating out of a dark and dingy warehouse in Cleveland Ohio. Sturman was making around $300 million per year when he died (and went to hell) in 1997.

The Jew-writer Eric Schlosser praised pornographer Sturman in a US News & World Report (owned by Jew Mortimer Zuckerman), eulogy upon Sturman’s death: “Sturman was a marketing genius whose intelligence and boundless self-confidence were responsible for his successes.” Well what more can we expect from these wretched Jews who stick together in their slime? 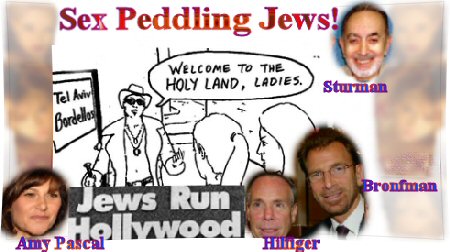 HOLLYWOOD JEWS OWN the foremost movie production companies that spew out sex and Anti Christian filth:


THE HOLLYWOOD JEW as listed above, spews out an endless series of perverted films to debase and degenerate the youth of America & Europe.

The Hollywood Jew cares nothing for the highest of Christian values, namely, marriage, honour, duty, patriotism, discipline, dedication of self to a higher aim. The Hollywood Jew distorts the God-created sexual life. The Hollywood Jew has created instead, “eroto-mania” which obsesses its millions of youthful victims throughout America and Europe.

SEX-PEDDLING JEWS MUST BE STOPPED

HOW DO WE stop the sex-peddling Jews? We must first commit our own lives to Jesus Christ ourselves and regular Church attendance.

Then we must insist that Jews no longer remain a “nation within a nation” but become Christians and join the “brotherhood of man” in the Mystical Body of Christ. Then we need to teach the Jews basic moral and ethical conduct.

Hopefully, this will save the Jews from the coming backlash against them which history shows is inevitable. For time and time again - when the Jews showed themselves to be a cancer in society, as they are now, the host nations struck back!