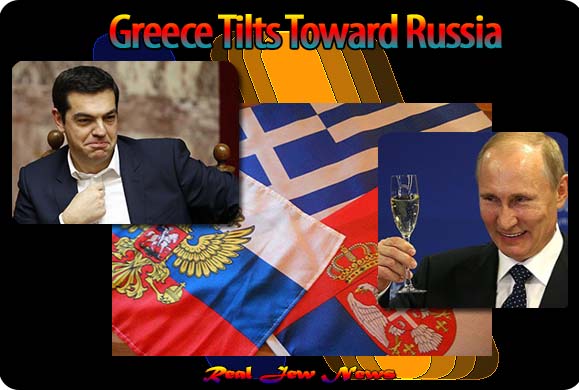 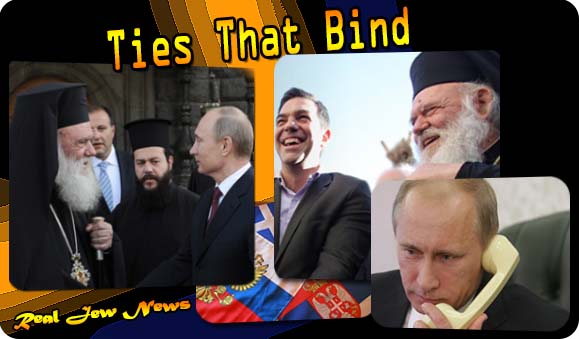 IT’S DEJA VU all over again. But this time the adversary (”Jewmerica”) is well known and protected against.


In 2007, Greek prime minister Karamanlis and Russian president Putin were on the brink of signing several agreements including major energy accords extending to 2040.

But with the Mossad’s and CIA’s plot to assassinate Karamanlis due to his boosting ties with Orthodox Christian Russia (Jews fear the Russian Church) and his toppling in 2009 just prior to Papandreou signing Greece’s death warrant with the IMF, that all came to an end.

Wiser today, (Jew-wise that is), Greece is again tilting toward Russia due to Syriza’s new populist coalition government.

Both Orthodox countries, Greece and Russia have long enjoyed bilateral relations despite setbacks in the 19th and 20th century. There are many Greek expats in Russia and a large community of Russians in Greece.

And with Turkish Stream in the background—with its pending construction reaching to the Turkish-Greek border from which the EU must build its own infrastructure to bring Gazprom to southern Europe—Russia and Greece will soon enjoy an economic partnership vis-a-vis Europe’s energy needs.

The ball is in motion with Putin inviting Greece’s new prime minister Alexis Tsipras to visit Russia on May 9th when Moscow celebrates Victory Day commemorating its win against “nazi” Germany.

The symbolism is clear: Both Putin and Tsipras agree that the West-enabled Kiev coup brings a “neo-nazi” threat to the Ukraine-Europe alliance. 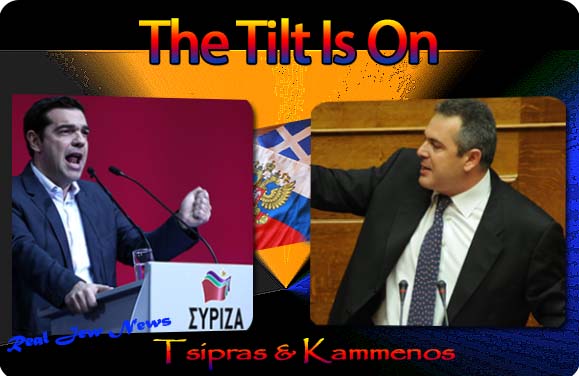 Not only is Tsipras going to Russia, so is new Defense Minister, Panos Kammenos.

A seasoned politician, Kammenos formed ANEL in 2012, a patriotic, church-loving, anti-immigration party, after being ousted from the New Democracy Party for refusing to vote in favor of the Memorandum signed with Greece’s foreign lenders. 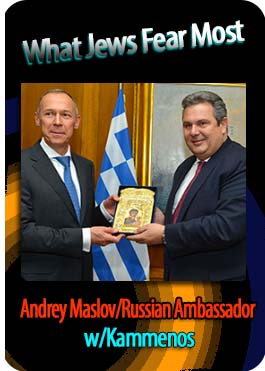 With demands from the Central Board of Jewish Communities in Greece that he apologize for his “serious anti-semitic act,” Kammenos, who wants a greater role of the Orthodox Church in government decisions, refused to kow to Christ-hating Jews.

Kammenos presents himself as a defender of Greece sovereignty from a range of foes hell bent on destroying the country.

Even when his statements are attacked by his detractors (Jews) as “baseless,” his supporters see their debunking as evidence of plots and control of the media by “shadowy forces,” again…Jews.

WORKING CLOSELY with fellow ANEL MP, Gavriil Avramidis, who heads up the “Greek-Russian Alliance” aimed at widening cooperation between Greece and Russia, Kammenos has a strong ally in forging greater ties with Russia.

“Greece must adjust its geopolitical priorities and turn towards Russia,” Avramides reportedly told Itar-Tass upon the forming of the Syriza-Anel coalition government.

Only by turning from Jewish-oriented Europe to Christian-oriented Russia can Greeks be delivered from the sink hole of the depraved, Jew-ruined West.