Kerry Cowers Before The Jews 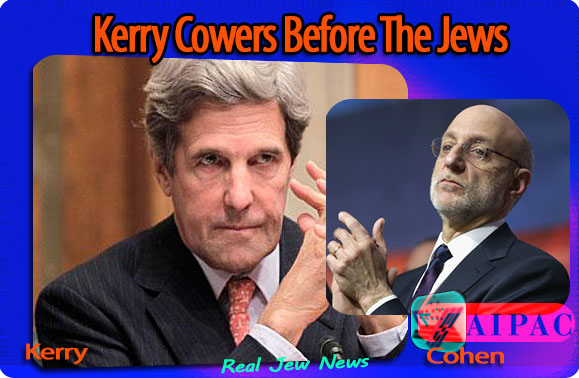 Kerry Cowers Before The Jews
By Brother Nathanael Kapner May 1, 2014 © 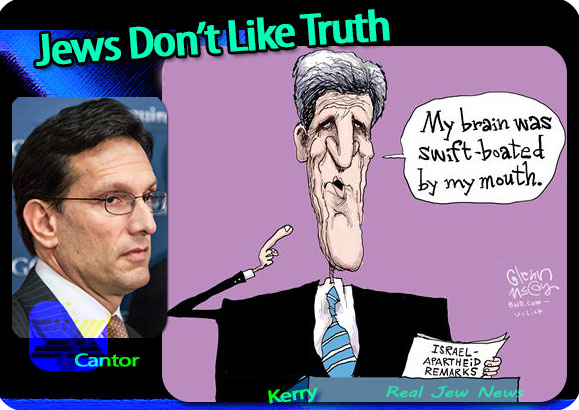 BETTER NOT BASH IsraHell or all ‘hell’ will break out and fall on your head.


You can denounce and even lie about any country you like…BUT if you TELL THE TRUTH about Hymie Town in the Mid-East you risk putting your political career on the ropes.

Kerry’s boo boo was that for once he told the truth.

Speaking at a meeting of the Trilateral Commission in DC, Kerry warned that if Israel doesn’t make peace soon it could become an ‘apartheid’ state like the old South Africa.

The Jews jumped all over Kerry with Abe Foxman and AIPAC at the lead.

And Eric Cantor lost no time “demanding” that Kerry apologize. And apologize Kerry did! 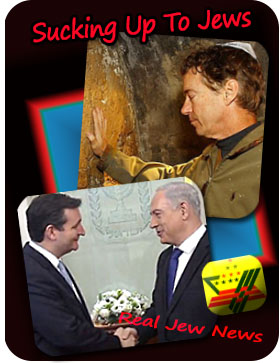 Some call it groveling but State Department spokeswoman Jen Psaki said Kerry was simply underlining the need for a ‘two-state solution.’

But Psaki’s defense of Kerry fell on deaf ears of the two leading suckers-up to the Jews—Ted Cruz and Rand Paul—in their race to get the ‘Jew vote’ in the 2016 presidential election.

Isn’t it interesting watching sharks eat their own?

“Kerry plays into the hands of anti-Semites and must resign,” Cruz told Fox News.

Not to be upstaged, Rand Paul countered Kerry’s momento della verità with his Stand with Israel Act of 2014 devised to cut off any US aid to the Palestinians for refusing to recognize Israel as a ‘Jewish state.’

I don’t know about you…but I’m sick of Jews running this country.

What’s even sicker is watching Gentiles cower before Christ-hating Jews.