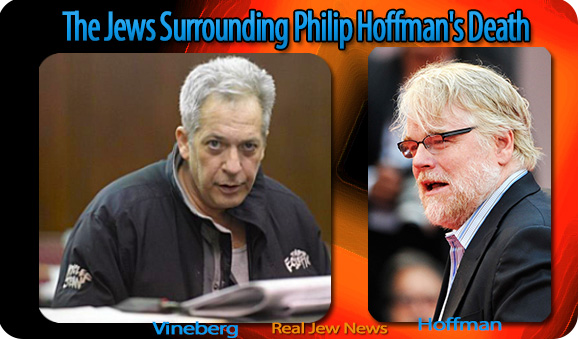 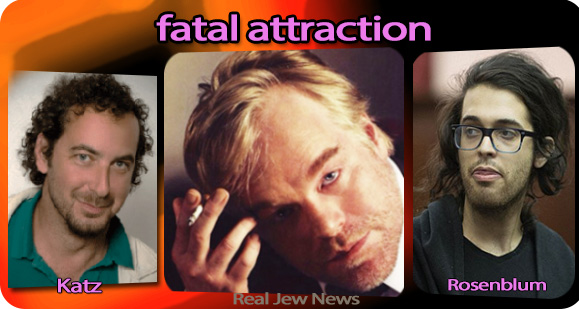 ALTHOUGH PHILIP SEYMOUR HOFFMAN was not a Jew, the names surrounding him sound like a Jewish law firm: Vineberg, Rosenblum, Cushman and Katz.


The actor even sought Jewish companionship with David Bar Katz on the night he died.

Four of Hoffman’s drug-dealing acquaintances were arrested Tuesday eve (three of them Jews) in connection with the heroin sold to the actor of which he reportedly overdosed on.

Both Rosenblum’s and Vineberg’s Jewish attorneys, Daniel Hochheiser and Ed Kratt, wasted no time declaring their clients were being ’scapegoated.’

“Searching for a scapegoat to solve the overdose of an addict is a fool’s errand,” said Hochheiser. … “I hope the District Attorney will not use Mr Vineberg as a scapegoat in that unfortunate incident,” echoed Kratt.

(It will be interesting to hear if the 70 bags of heroine found in Hoffman’s apartment chemically match the other 350 bags of heroin in Vineberg’s stash. BUT sometimes Jewish attorneys can work magic with money and bribes.) 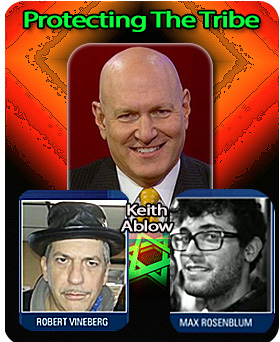 Now enter the guru of the subconscious to the movers and shakers, the Jew Keith Ablow.

That’s right folks, Ablow works for Murdoch’s Fox News where he serves as the “the expert in psychiatry.”

Ablow is working cover for his tribe members making sure the focus of blame is fixed solely on Hoffman.

Surrounded by ALL these Jews—drug-dealers, attorneys, TV shrinks—it’s difficult not to be skeptical when it comes to another famous Hollywood actor’s sudden death.

From field to street, to Hollywood high rises, some form of Jewry plays a large role in the drug trade.

From Marilyn Monroe to Michael Jackson, the Judas geist (Jewish spirit) surrounds the sudden death of famous entertainers more often than not.

WHAT’S THE LESSON for Goys who hobnob with Jews? It’s clear. You’ll die.

As individuals go so do nations.

Turn out the lights Jewmerica.

You have overdosed on degenerate immorality, debt, and endless war supplied by the deep pipelines of Jewish treachery.