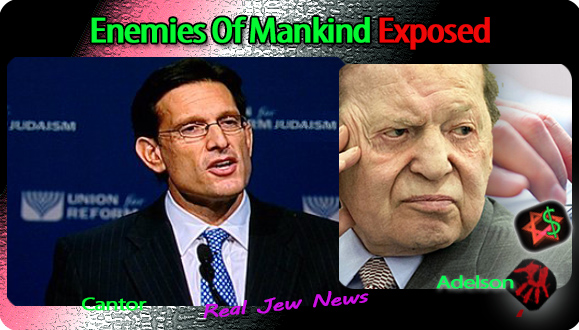 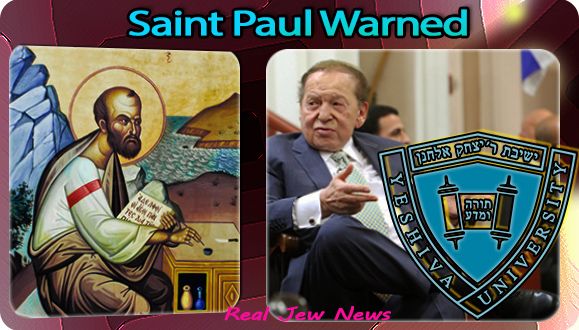 IF THEY CRUCIFIED CHRIST and never repented…can anything good come out of Jewry?


This is a question that all who wish to see America restored must answer.

If Sheldon Adelson’s and Eric Cantor’s recent warmongering statements regarding Iran are an indication of what Jewry is really all about then the answer is “NO.”

Nothing good can come out of Jewry. Only evil and destruction.

If there is any hope for our country’s future and the next generation then the enemies of mankind must be exposed and put out of power.

Speaking before a large group of Jews at Yeshiva University who signaled their approval by hearty applause, Sheldon Adelson called for the US military to drop a nuclear bomb on the people of Iran. View Story & Videos Here, Here & Here.

What can we say about these bloodthirsty Jews who wish to see a US bomb explode in the middle of Tehran?

Are they human beings? Do they have a conscience? (Rabbi Boteach who hosted the Yeshiva U Conference defended Adelson’s statement.)

Or, as St Paul warned, are they not clearly the “enemies of mankind” whose “consciences” are seared with a hot iron? 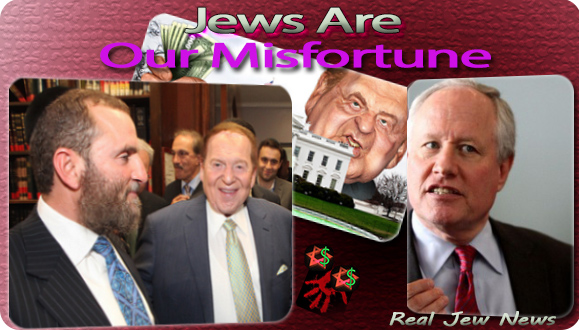 WHAT IF A ‘GOY’ called for nuking Tel Aviv? All hell would break loose. Wretched Jews from every media rat hole would demand the ‘Goy’s’ immediate death.

But let a billionaire Jew who funds Jewry’s lackeys on Capitol Hill say it—with full approval from his Jewish audience—then he and his rabble get a free pass.

Even the Jew Eric Cantor is leading Congress down the dung hill with his warmongering rants and programme.

For while Iran is waving the olive branch regarding their right to develop nuclear power, Cantor is calling for even greater sanctions against that ancient and noble country.

In concert with his fellow tribal bloodhounds at AIPAC — lobbying overtime to sabotage US-Iran negotiations via bribery of Jew-bought hacks — Cantor’s demand for harsher sanctions on the Iranian people illustrates that Jewry is indeed the enemy of mankind.

AND with blood flowing from their barking tongues, Jewish neocons William Kristol and Michael Makovsky, (Director of Jinsa that brought us the WMD lie), are endorsing Israel’s threat to “act alone” in taking military action against the people of Iran.

It’s time we take action. Jews MUST be put out of power. Jew-money must NOT be allowed to influence US policy any longer. 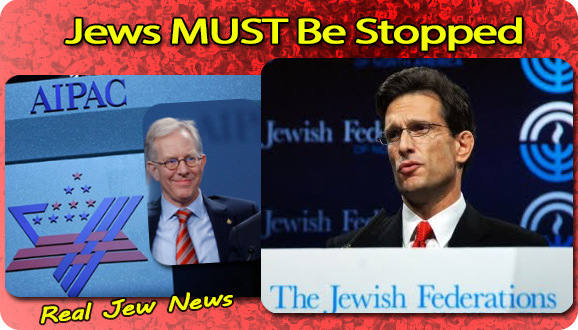 PUTTING JEWS OUT OF POWER

WE ALL KNOW what the problem is…it’s time for some real solutions.

5 Point Plan To Put Jews Out Of Power:

1) Require AIPAC to be the first Jewish organization to register as a foreign agent.

5) All Synagogues with Zionist ‘non-profit’ collection boxes or issuing Appeals to financially support Israel must register as foreign agents or lose their tax deduction status.

IT’S TIME to STOP the Jews. Their power and influence MUST come to an end.

The enemies of mankind have had their say.

NOW it’s our turn to restore America and redeem the world.