Lieberman…Warmongering Jews Do Not Retire 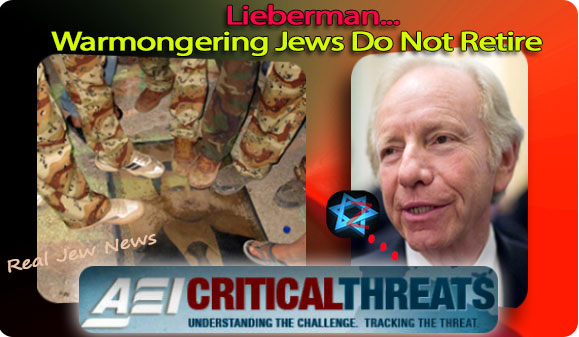 Lieberman…
Warmongering Jews Do Not Retire 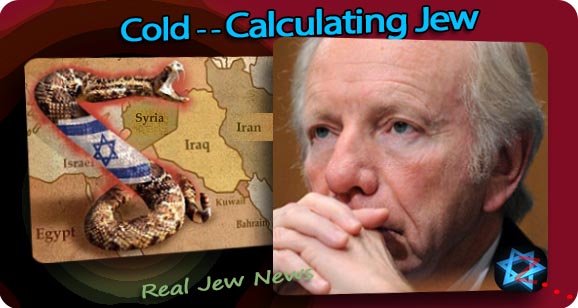 ONCE A JEW GETS A TASTE OF POWER, he’ll lick his chops until the day he dies. And former Jewish Senator, Joseph Lieberman, is bitter proof.


On March 11, 2013, the neocon Jew-infested ‘think tank,’ the American Enterprise Institute (AEI), announced that Lieberman was appointed co-chair of the American Internationalism Project, a branch of AEI’s Marilyn Ware Center for Security Studies.

These are the Jew boys and their Gentile hirelings who brought us the Iraq War vis-a-vis the Jewish lie known as Sadaam’s ‘weapons of mass destruction’ which has left 4,500 Gentile American soldiers dead (Jews do not fight in their global wars) and 1.5 million dead Iraqi civilians.

To this day, Lieberman keeps the Jewish lie alive by arguing that “evidence” (Jews like these kinds of words to snow the Goyim) of Sadaam’s ‘weapons of mass destruction’ justified his vote nine years ago to send Gentile youths to their deaths in Iraq.

But can we really expect Lieberman to tell the truth when out of one side of his Jewish mouth he condemned “waterboarding” as torture but on the other side he afterwards approved it. View Entire Story Here & Here.

Yet, in spite of the onward march of Jewish lies, if Lieberman and friends have their way, there will be MORE wars for the Jews and the erection of Lieberman’s favorite pastime as former head of the Senate Committee for Homeland Security, a global Jewish police state. 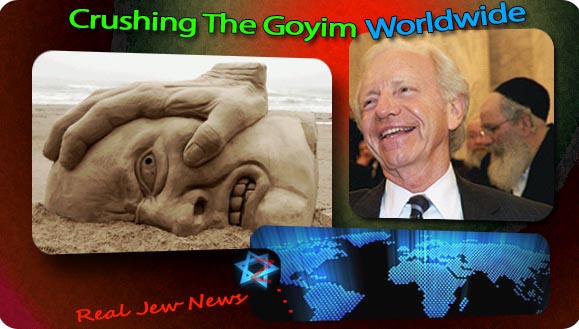 WITH HIS DIRECT PIPELINE TO CONGRESS, Lieberman is well placed in his new role at AEI to push the warmongering police state agenda of global Jewry.

As co-chair of AEI’s American Internationalism Project (a fancy word for Jewish imperialism) Lieberman’s work will include:

Lieberman remains an agitator for the “military option” in Iran.

To this very day he continues to incite for the “international community” (read Jew-enabled NATO) to bomb the nuclear threat out of Iran (and thousands of Iranian civilians as well) so that a Greater Israel can move beyond the Euphrates. 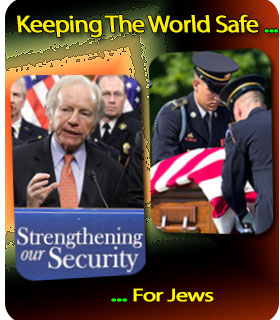 Lessons for a Long War: How America Can Win on New Battlefields Here.

Lieberman in conjunction with Jewish imperialist Netanyahu will not rest until every American Gentile youth under 30 comes home with missing limbs and then designated “unfit” to own guns by Jewish gun-grabber Feinstein.

Lieberman lodged his war-mongering legacy in the halls of Capital Hill by sponsoring on December 12, 2012, an amendment to the NDAA that provides for a US/NATO-enforced no-fly zone in Syria in order to topple Assad, a proven protector of Syrian Christians.

BUT WHAT DOES LIEBERMAN care about Christians? He’s a Jew and will even stoop to arming terrorists so that the anti-Christ nation of Israel can bulldoze into oblivion all those it perceives as its enemies.

And Jewry’s enemies are those who won’t allow them to walk all over them. And that means me and you…

And: The Jews Behind NATO’s Rape Of Libya Click Here