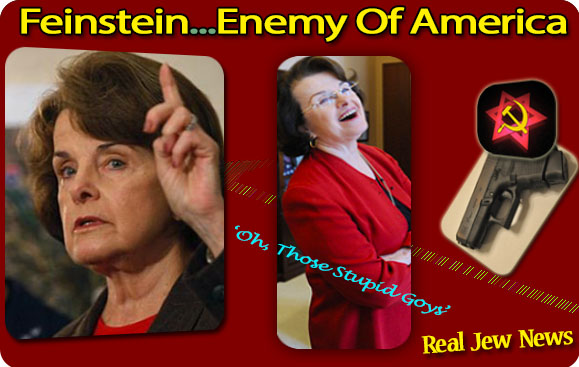 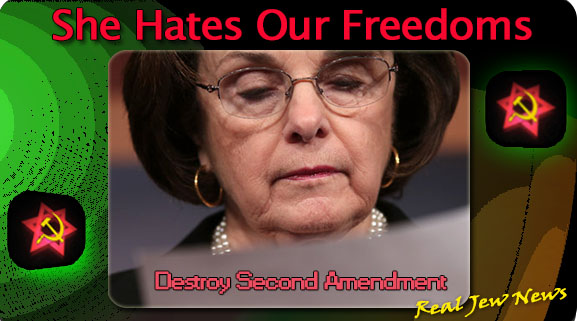 A NEW BENEDICT ARNOLD is now defacing the Constitutional order of liberty in American life and her name is Diane Feinstein.

With her devilish mission to strip the Goys of their guns—(she wants MORE than just “assault weapons” BANNED)—Dianne Feinstein has to be the MOST HATED woman in America today. And she just happens to be a Jew.

But does it really matter that Feinstein is a Jew?” Yes it does.

First of all, American Jewry is getting very nervous that a JEW is leading the attack on America’s most cherished possession affirmed by the Second Amendment, the right of personal sovereignty.

One Jewish group in particular, Jews For The Preservation of Firearms Ownership, fears a backlash against American Jewry owing to the anti-gun lobbying of several national Jewish organizations.

Rabbi Aaron Zelman, founder of JPFO, puts it this way:

“By working to destroy the Bill of Rights, Jewish Groups are fanning the flames of anti-Semitism.

“A lot of Americans resent these people who trample on our fundamental rights.” View Entire Story Here.

But what is even more likely to “fan the flames” of anti-Semitism is due to the high number of HIGH PROFILE JEWS now at the forefront of trampling on the Second Amendment.

Abe Foxman’s mission to prevent a backlash against Jews is bound to fail when JEWISH NAMES like Feinstein, Blumenthal, Cardin, Wasserman-Shultz, Schumer, Israel, Boxer, Lautenberg, Bloomberg, are LEADING THE CHARGE to STRIP Americans of their guns.

It’s really a matter of personal ownership—(which underlies the right to bear arms in order to defend oneself and family)—that is at stake here.

And Dianne Feinstein, a Jew, is hell-bent on seizing ownership of every American citizen’s particular and personal individual body. 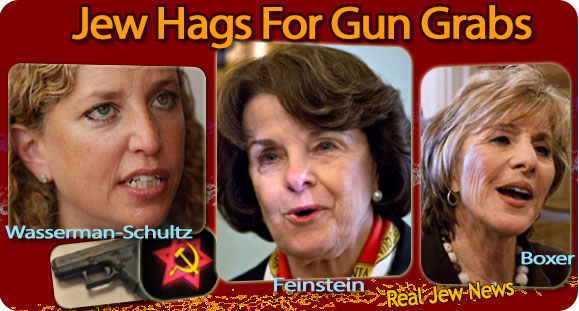 DO AMERICANS WANT TO BE OWNED by Dianne Feinstein?

Do Americans want to be owned by Jews?

Do Americans want a Jew like Feinstein and her ilk to tell them what they are allowed and not allowed to do with their OWN BODIES?

Do Americans who possess “grandfathered” weapons want the Jew Feinstein to preside over them being investigated, photographed, and fingerprinted…their firearms registered with local, state, and federal authorities by type and serial number?

For this is EXACTLY what this freedom-hating Jew Feinstein is pushing with her new piece of legislation. 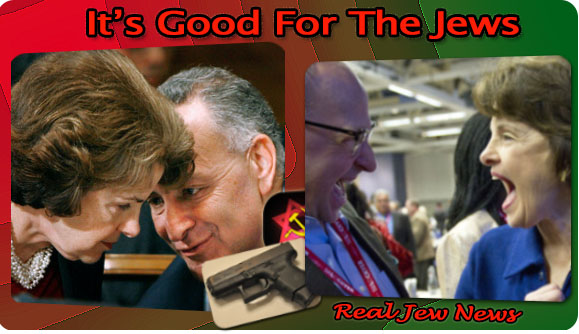 WHAT GIVES FEINSTEIN THE RIGHT to moralize over Americans who work for a living when she herself is nothing but a contemptible parasite feeding off taxpayers’ hard-earned money for the entirety of her life and career?

Who gave this Jew the license to tell Gentiles what they can or cannot buy when she herself has enriched herself with a net worth of $108 million through insider trading due to being privy to companies about to receive large grants from Congress?

What gives Feinstein the right to deny families their inalienable right to arm and defend themselves when she herself has been legislating for homosexuality, lesbianism, and transgenderism, all of which militates against the preservation of the family?

Is it any wonder then that Dianne Feinstein is the MOST HATED woman in America today?

Would it be any surprise if Feinstein’s gun grab provokes a backlash against Jewry?

Is there any question in anybody’s mind that Feinstein—A JEW—is the enemy of America?

And: What Really Happened At Sandy Hook? Click Here

And: Why The Jews Want Your Guns Click Here