Goldman Jews Do The World 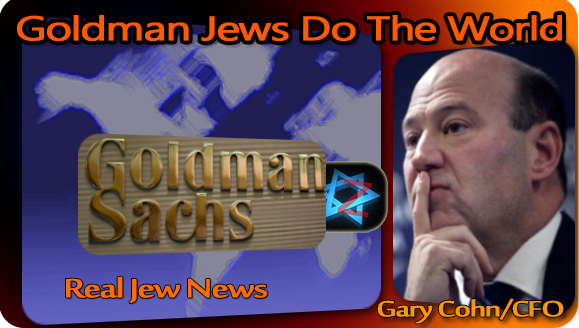 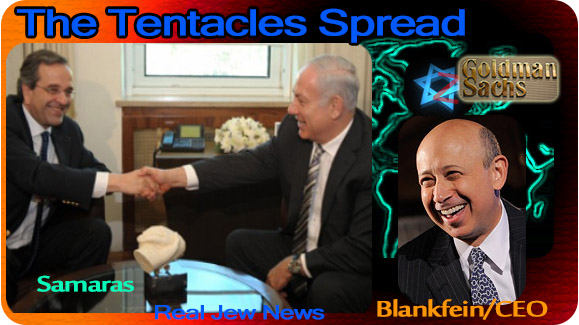 “GIVE ME CONTROL OF THE WORLD’S MONEY and I care not about nations and governments,” is the apparent maxim of Jewish investment bank, Goldman Sachs.


As America and Europe descend into economic collapse there is still much money to be made…but only by the self-chosen.

And the Jews of Goldman Sachs, along with their Jewish colleagues throughout the International Banking Industry where “finance capital” motors production & globalization, and their Jewish investors, are making a killing.

It’s a great transfer of wealth where the monies once made by American and European white and blue collar workers is first placed into the pockets of Jews and then funneled off to off-shored governments and workers in China and India.

Cementing Jewish hegemony over the financial and economic realm of America vis-a-vis powerful Jewish investment banks like Goldman Sachs and their Jewish allies at the Federal Reserve Bank, Europe has succumbed to Jewish monetary and economic rule.

Both Unelected & Elected Technocrats now govern Europe. And their dossiers have “Goldman Sachs” written all over them: 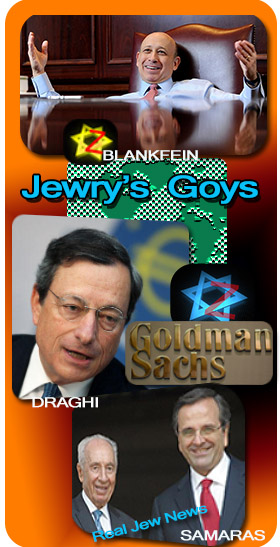 • Antonis Samaras - Current Prime Minister of Greece. (Jewish commerce interests apparently behind his political career.) As Finance Minister, he signed Greece into the EU. Samaras is fully dedicated to the Jewish agenda.

• Lucas Papademos - Preceded Samaras as Prime Minister of Greece. (As head of Central Bank of Greece he hid huge debts by using off-market swaps arranged by Goldman Sachs where Goldman Sachs made out like a bandit.)

WITH THE WORLD’S MONEY at the command of Jewish finance capital—led by Goldman Sachs—control of nations’ governments is a walk in the park.

But those few nations that go their own monetary way will either be bombed into utter ruin (like Libya) by Jewry’s global terrorist group, NATO, or be saddled with harsh sanctions (like against Iran) by the Jewish-bought governments of Europe and America.

OR those hapless nations will have American-funded al-Qaida (those ‘democracy-loving‘ rebels) blowing up school children (as in Syria.)

It’s a great big Jewish world we live in today. And the Jews got the world by the gonads…

And: Jewish Supremacism & The Death Of American Labor! Click Here

And: Goldman Jews Do Greece (America Too…) Click Here