The Jewish Cartel Not QE3 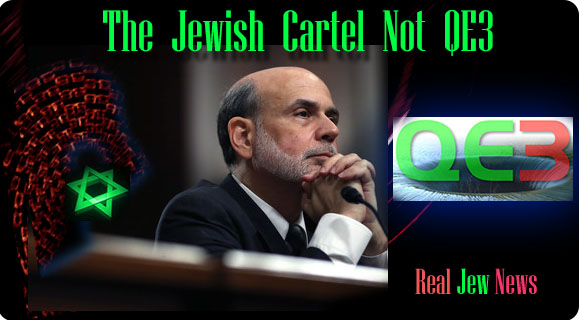 The Jewish Cartel Not QE3
By Brother Nathanael Kapner, Copyright 2012 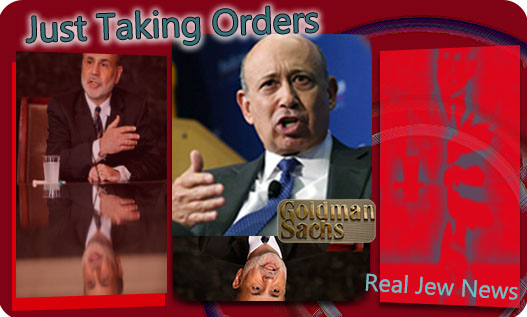 IF THE ROOT IS ROTTEN both the tree and the fruit will be decayed. If the foundation is shifty both the walls and the roof will cave in.


For the US government to borrow money from the Jewish-owned Federal Reserve Bank AT INTEREST when it can freely coin its own money as provided by the US Constitution then something is rotten in DC.

Many are witlessly aiming their guns at Ben Shalom Bernanke…this time for his QE3 Stimulus Program to supposedly boost the economy.

Fact is, Bernanke is once again bailing out Goldman Sachs and the entire Jewish Cartel by buying $50 billion worth of “mortgage-backed securities” every month.

These are the same “bundles” and “financial products” that the Jewish-owned Fed bought with tax payer money back in 2008 with Goldman Sachs being the main recipient.

QE3 is NOT about the economy.

QE3 is about buying leftover BAD loans that the Jewish bankers participated in via subprime mortgages and making the taxpayer pay for it.

And the pawn of the big Jewish bankers, (he’s a member of the Synagogue), Ben Shalom Bernanke, is dutifully carrying out orders from the yarmulke big boyz. 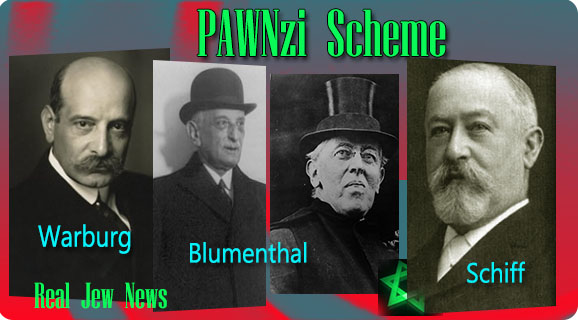 UNDER DUBIOUS CIRCUMSTANCES, Jewry’s pawn in the White House, Woodrow Wilson, pushed through the Federal Reserve Act on December 19, 1913, while most of the members of Congress were home for Christmas.

Operating as agents for Nathaniel Rothschild, the monetary resources of America were now in the hands of three Jews:

Jacob Schiff of Kuhn, Loeb Bank; Paul Warburg, appointed by Wilson as the Fed’s first Chairman; and George Blumenthal, a high official of JP Morgan. Henceforth, the “Treasury” of the United States would forever be in the hands of the Jews.

A glance at today’s Treasury Department finds Jewish Cartelization as the status quo. 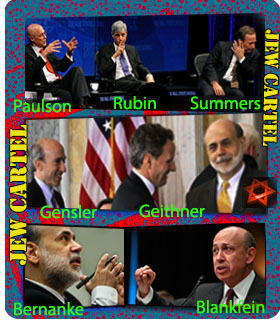 The current head of Treasury is the Fed’s boy Timothy Geithner. (Geithner served as President of the NY Fed from 2003-2008 and as Under Secretary of the Treasury from 1999 to 2001 under Robert Rubin and Lawrence Summers.) His current assistant is former Goldman Sachs lobbyist Mark Patterson.

During the “too big to jail” scam, Henry Paulson, a former Goldman Sachs CEO, was Secretary of the US Treasury. Paulson’s main adviser was Jewish Goldman Sachs man, Steve Shafran.

The Jew Larry Summers—(a protege of Goldman Sachs’ Robert Rubin)—was head of the Treasury from 1999 to 2001 under Clinton.

Just as Jewish investment banks own the corporations they finance, Jewish Wall Street which runs the Fed (Goldman Sachs and JP Morgan Chase CEO’s are perennials on the NY Fed Board) also owns the megacorp, The United States of Amerika, chartered as a corporation under the 14th Amendment. 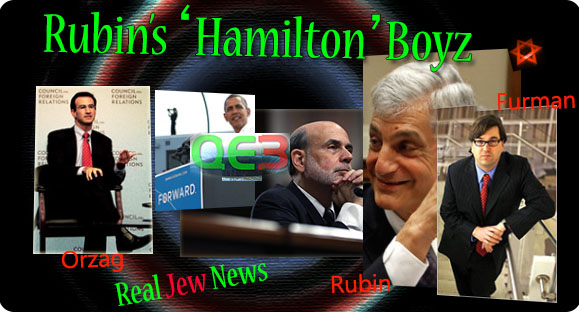 WHEN JEWISH PUPPET OBAMA was being propped up by the Jews for President, one of his first “showings’ was as guest speaker at the launching of Robert Rubin’s The Hamilton Project in 2006.

The aim of Rubin’s Hamilton Project was ostensibly to create an “economic platform” for the Democratic Party’s 2008 Presidential elections.

But its real goal was to ensure that Obama would not only be the next president but be surrounded by Hamilton Project boyz such as the Jews Peter Orzag (now working for Goldman Sachs) and Jason Furman.

Ladies and Gentlemen, the FIX IS IN. And the FIX has a Kosher Seal engraved on it.

We can throw stones at Bernanke all we want for ‘failed’ Fed policies from the ‘people’s point of view.’

But the Fed is a huge success for the Jewish bankers and those like their head clerk, Ben Shalom Bernanke, who live off the proceeds.

For if it’s good for the Jews (as the saying goes) then in most cases, (especially when it comes to making money), then it’s bad for Amerika…