WITH POWERFUL JEWS BEHIND HIM, Woodrow Wilson has done more to bring America into the hands of international Jewry’s pernicious designs than any other president.


As Jewry’s abject pawn, Wilson was instrumental in creating:

In Curtis Dall’s book, “FDR - My Exploited Father-In-Law,” when comparing FDR to Wilson, the author makes a connection between the overweening influence of powerful Jewish figures at the outset of Wilson’s presidency and his subsequent ‘illness’ during his second term: 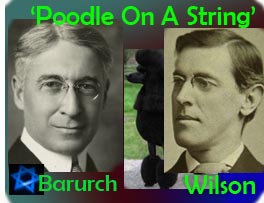 “Bernard Baruch would often walk into the Democratic Headquarters in 1912 with Wilson in tow, leading him like one would a poodle on a string.

Wilson would be given his ‘indoctrination course’ by several of the top Advisers assembled there. Reversing his role as classroom idealist, Wilson became a well-behaved, political pupil.”

A major factor brought to bear on Wilson’s ‘controllability’ was his affair with Mrs Mary Peck during his Princeton years. As it turned out, Wilson’s first lady, Edith Galt, ran the country when the president became ill.” View Entire Story Here.

Dall makes mention of the book, “When the Cheering Stopped,” which chronicles in painstaking detail the events leading to Wilson’s “nervous breakdown” in 1919:

“On September 25, 1919, while on a national speaking tour, Wilson fell ill in Wichita and was forced to cancel the rest of his trip.

Until the end of Wilson’s second term in 1921, his wife, Edith Bolling Galt, ran the affairs of the Executive Office, a role denied to Wilson’s vice president, Thomas Marshall.

Thus ensued what was known only by rumour throughout Washington: “The Petticoat Presidency” of Woodrow Wilson.

BEDRIDDEN DURING THE REMAINING YEARS of his presidency, Woodrow Wilson slept while an international network of Jewish financiers took control of America.

Bernard Baruch, a Jewish Wall Street tycoon, with ties to European Jewish bankers, particularly Paul Warburg, who became the first head of the Federal Reserve Bank, consolidated his power over the US military and American industries when acting as the Chairman of the War Industries Board.

It was this entity that was assigned the role of dictating co-operation between industry and the military during and after WWI.

Eugene Meyer, who rose to great wealth in his years at Jewish investment bank, Lazard Freres, and as a major decision maker of the New York Stock Exchange, used his role as head of the War Finance Corporation in 1918 to bring both the US military and US industries under the heel of Jewish bankers. 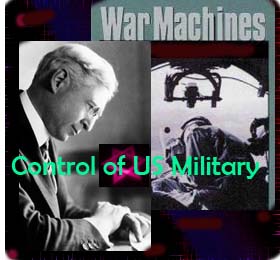 Meyer later went on to head the Federal Reserve Bank in 1930, the Washington Post in 1933, and the World Bank in 1956. View Entire Story Here.

At a Congressional Hearings in 1930 convened to determine the eligibility of Meyer to head the Federal Reserve, Louis McFadden, Chairman of the House Banking Committee, testified against Meyer’s nomination:

“Eugene Meyer has had his own crowd with him in the government since he started in 1917.

Indeed, Meyer’s own crowd, who used Woodrow Wilson as their poodle on a string – leading to his subsequent ‘insanity’ – have been the power brokers of the American political, military, and industrial scene ever since.

Only a radical overturning of the existing Judaic World Order will bring America back to the vision of its Christian founding fathers of a nation “free of alien rule” once again.