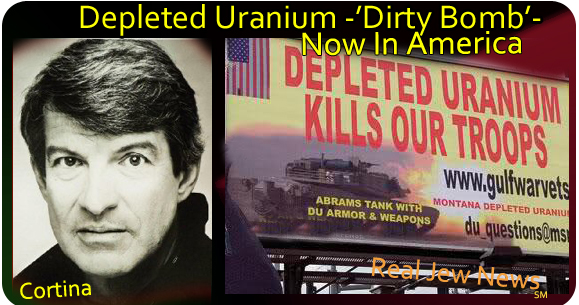 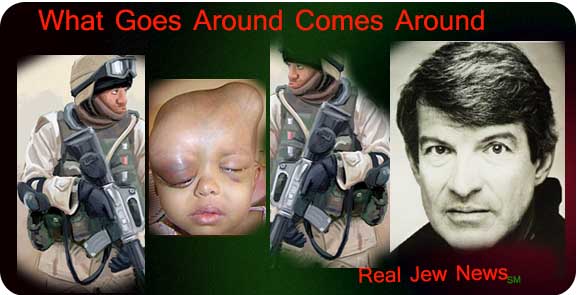 Joe Cortina: Depleted Uranium, also known as DU, is a by-product of enriched uranium used in nuclear reactors and weapons. Thus, it is called “depleted” uranium. Basically, it’s a waste product of the nuclear industry.

When Depleted Uranium is vaporized into the air it is DEADLY TO ALL LIFE on earth INCLUDING our own soldiers.

Br Nathanael: So why is it used by the US military?

Joe Cortina: Due to its high density it has greater penetration potential against armor and other hard targets.

It can be used for armor or in kinetic energy projectiles to defeat armor – as it’s about twice as dense as lead, and unlike tungsten, will ignite at temperatures over 600F. 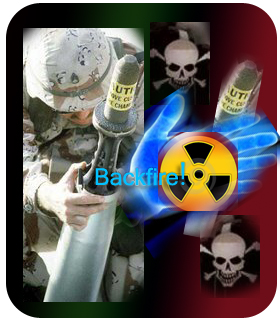 Br Nathanael: How is it dissipated into the environment under war scenarios?

Joe Cortina: Used in cannons, rockets and bombs, Depleted Uranium vaporizes after the heat-of-impact and then produces profuse DU dust particles as small as 5 microns and can travel long distances when airborne.

Br Nathanael: How is it introduced into the human body?

Joe Cortina: Three ways – absorption through the skin, or through open wounds, or by inhalation into the lungs…which is the most common AND most hazardous.

Br Nathanael: Are there ‘safe’ dosages?”

Joe Cortina: ONLY – if you believe the biggest liars on earth – the US Government.

Our Government, now under the control of Jews, has lied to the public for years about all aspects of radioactive isotopes – more recently regarding DU.

There is no ’safe’ dosage rate below which dangers disappear. “No threshold-dose,” says John Gofman, a former Associate Director of Livermore National Laboratory, one of the scientists who worked on the atomic bomb and co-discoverer of uranium-233.

Br Nathanael: The US government has been lying to us about depleted uranium? When was this dangerous technology first employed?


Joe Cortina: Our government has been lying about the risks since day-one of the Gulf Wars beginning in 1991. During the first period, Desert Storm, approximately 350 tons were spread in Iraq.

During the subsequent wars – the 2003 invasion of Iraq - nearly 2000 Tons turned that nation into a radioactive wasteland. Our soldiers who have returned home, suffering from Depleted Uranium’s poison, are calling their deadly ailments, “The Gulf Syndrome.”

Br Nathanael: Is it used in Afghanistan as well?

Joe Cortina: Absolutely! There has been even MORE tons of this deadly poison spread over Afghanistan by an irresponsible Government gone mad! These deadly micro-particles are often carried up into the atmosphere and released with rain hundreds of miles away.

The Jews themselves have poured over 75 tons of this radioactive death on the tiny 138 Square Mile Prison we know as Gaza. That’s enough to kill 50 million people. Gaza has 1.5 million people. 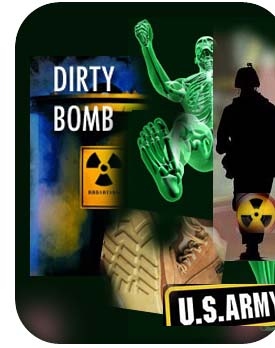 Br Nathanael: What a horrible nightmare. I have heard that these demonic weapons are called “dirty bombs.” Is there any validation of this in technical terms?

Joe Cortina: Let me tell you just how accurate that fear is considered to be by the experts.

When Dr Marion Falk, a retired Chemical physicist who built nuclear bombs for more than 20 years at Lawrence Livermore Lab, was asked if he thought that DU weapons operate in a similar manner as a dirty bomb, he stated, “That’s exactly what they are. They fit the description of a dirty bomb in every way.”

Br Nathanael: So – America has become the major destroyer of the world community environment?

Joe Cortina: Absolutely, once again! We are as evil a polluter as any nation on earth.

Br Nathanael: But is there any evidence to show that our Government was aware of these war crimes against humanity?

Joe Cortina: Once again – PROOF POSITIVE. While the Pentagon officially denies the dangers of DU weapons, ever since at least 1943 the military has been aware of the extreme toxicity of uranium dispersed as a gas, or as dust particles.

A declassified memo written by James B Conant while working on the US nuclear project during the Second World War and sent to Brigadier General LB Abrams on October 30 1943 provides the evidence.

In the memo, Conant states that dust particles carrying Depleted Uranium are equally inhaled by US military personnel. The amount necessary to cause death to a person inhaling the material is extremely small…that only one millionth of a gram in a person’s body would be fatal. He goes on to say that there are no known methods of treatment.

Point is – ALL of our military, and their masters—our now all pervasive war-mongering Jewish civilian leadership—know EXACTLY what happens when polluting the earth with Depleted Uranium.

Br Nathanael: Joe, as a former Green Beret how do you access what is happening with our militaristic nation?


Joe Cortina: We are now a nation under the thumb of what I call the Military/Judaic Complex.

Under this entity, we have become the monsters of the universe – whose greed, lust for power, and bloodshed for the Jews, has exalted all manner of evil and wickedness to obfuscate rationality, goodness and wisdom.

The recent massacre of 17 Afghan villagers by Sergeant Robert Bales—who DID NOT ACT ALONE—but was assisted by at least 20 other US soldiers is a fitting metaphor of a Jewish-controlled America gone mad.

And by the way, the Jew-owned press is maintaining the lie that Bales was a “lone, drunk, shell-shocked soldier.” More lies, more cover-ups by our Military/Judaic nation. 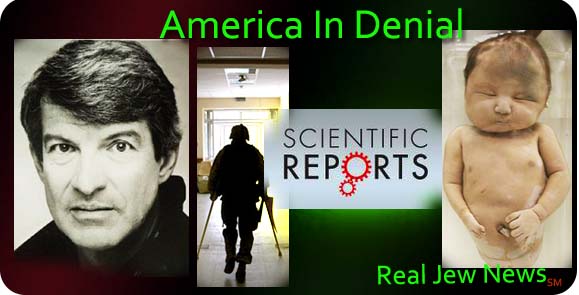 Br Nathanael: What have we done? Have any effects of the poisons of Depleted Uranium shown up in our own US soldiers since these endless serial wars started?


Joe Cortina: The evidence is legion.

“Anybody, civilian or soldier, who breathes these particles has a permanent dose and it is not going to decrease very much over time,” stated Dr Leonard Dietz, a nuclear physicist with 33 years’ experience, as he told the New York Daily News. “In the long run,” Dietz said, “veterans exposed to DU’s ceramic uranium oxide have a major problem.”

Dietz, by the way, has written many scientific reports on the deadly hazards uranium depleted weapons have on our US soldiers which have been ignored by the Pentagon and its enablers at the Jew-run, war-mongering, Main Stream Media.

In concert with Dietz’s analysis, Dr Falk, whom I mentioned above, and other authorities state that inhaled particles of depleted uranium dust will either lodge in the lungs or be carried through the body’s cell walls and “affect the master code” – the expression of the DNA. View Entire Story Here, Here & Here.

Then we have Terry Jemison of the Department of Veterans Affairs who said that of the 592,561 discharged veterans from the 1991 Gulf Wars through the War in Iraq, 179,310 are receiving disability compensation and another 24,763 cases are pending. 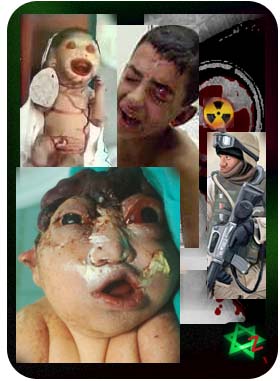 Br Nathanael: I have seen photographs of infants born in Iraq and Afghanistan during this period and they are truly heart-breaking. I have also seen photos of young children maimed for life.

Joe Cortina: Let me put it this way, and remember, I speak as a former Green Beret who has served my country faithfully and honorably.

Now that these horrors have been exposed – including the FACT that our ‘Government’ has LONG SINCE known about the deadly nature of these lethal threats to all living organisms – rational people can only conclude that those with whom we have entrusted our very lives are lying, sociopathic, mass-murdering criminals – from our top-ranking Military leaders all the way to the President – and MUST be charged, tried and convicted of committing mass murder.

To NOT do so is to doom humanity to eventual extinction and relegate the goodness of human beings to that of mindless, barbaric criminals. We MUST regain our sanity and do what needs to be done. And that is to rein in the greatest institutionalized terrorist apparatus on earth – the greedy, Godless, murderous, maniacal Military-Judaic Complex that was once America.

Br Nathanael: So, what is the fate of the six-hundred-thousand-plus and the growing daily number of returned Vets who have been exposed to breathing in DU dust particles?

Joe Cortina: Simple – they will all die of depleted uranium contamination – some sooner – some later.

Some already have and will father babies that will be horribly deformed and suffer the very same grief they have caused countless innocent Afghan and Iraqi parents by saturating their environment with radioactive death. 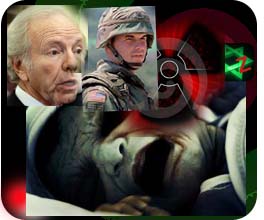 Thousands of US soldiers returning home from our Jew-inspired wars have suffered memory loss, physical maladies, even deaths, and are unknowingly spreading the poison of Depleted Uranium to their wives and newborn babies.

But that’s OK with many Americans because the endless wars which Jewry has forced upon us with its powerful Lobbies and Media Control has made the world, as Jew neocon Robert Kagan tells us in his latest piece of Jewish propaganda, ‘a safer place.’ OH – I almost forgot – safer for Jews only.

Or, if you feel really ‘patriotic’ – you can see your recruiter and redeploy to murder more “rag heads” or “dune coons” or “sand nigger’s” children – as the Jew-run media so eloquently belittles them. There now – don’t you feel a whole lot better about being a brave, free, democracy-loving American?