Why Is The World Enslaved To A Jewish State? 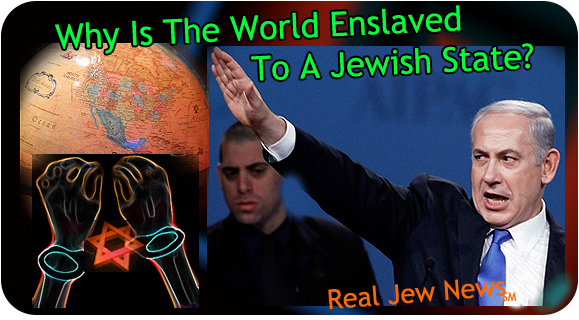 Why Is The World Enslaved
To A Jewish State? 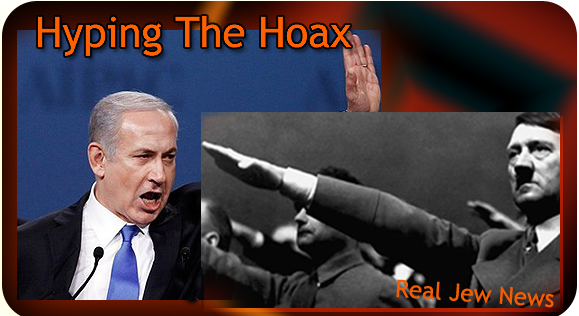 HOLOCAUST HYPE is now being used by Jewry’s chief warmonger, Benjamin Netanyahu, in order to conscript the world into the Jewish malice toward Iran.


In a speech at AIPAC’s 2012 Conference on March 5, which included over half of the US Congress, Netanyahu compared America’s reluctance to attack Iran with America’s unwillingness to bomb Auschwitz. (Here comes the guilt trip.)

Brandishing a copy of a 1944 letter from the US Department of War, Netanyahu recounted how the Allies had refrained from attacking the camp out of fear it might provoke vindictive action from the Germans. 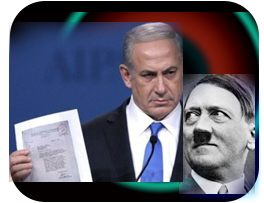 “My friends, 2012 is not 1944…Never again!” Netanyahu cried, repeating the slogan of the violent Jewish Defense League to a roaring standing ovation from the audience.

By declaring, “The purpose of the Jewish state is to secure the Jewish future,” Netanyahu’s message is that waging wars for Israel will make the world safe—NOT for ‘democracy’—BUT for Jews, and for JEWS alone.

This is best illustrated when Moshe Kantor, President of the European Jewish Congress, warned that “reports” were circulating that Iran could strike Germany in response to an American attack on Iranian nuclear installations. Of course, Kantor was not able to show any proof of these “reports.” 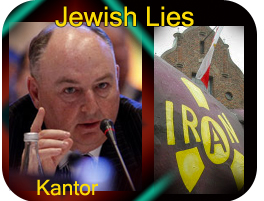 Thus, to cover himself, Kantor stated: “Whether or not these reports are valid is beside the point. We know certain facts and they are that Iran sees much of Europe as its enemy.”

(Ridiculous since Iran is dependent on European markets. And regarding nuclear capabilities, it has been affirmed that it only serves as a deterrence.)

These “certain facts,” that Kantor and Jewry whom he speaks for “knows,” are totally subjective. For whatever promotes a Jewish future, whether it’s destroying Iran or annihilating the entire world’s civilization, is ALL that matters to these Jewish leaders.

The question must be asked, “Why is the Gentile world obligated to act on behalf of the ‘Jewish’ state of Israel? 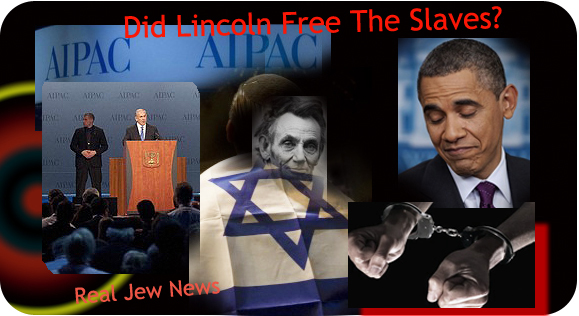 SLAVES OF A ‘JEWISH’ STATE

THE PENCHANT FOR MAKING DEMANDS is characteristic of Jewry’s conduct and the modus operandi of its spokesmen.

The US State Department’s ambassador to Israel, Dan Shapiro, insists that before Israel would ever grant, (why is a US ambassador speaking on behalf of Israel?), any kind of Palestinian statehood, the supplicants must first recognize Israel as a ‘Jewish’ state.

Barack Obama, enslaved to the dictates of AIPAC, (one wonders if Lincoln ever freed the slaves), has vowed, ad infinitum, that he is committed to Israel as a ‘Jewish’ state and the ‘homeland’ of the Jewish people.

(We have yet to see American and European Jews flocking to their ‘homeland’ so long as they can rule over the Gentiles in their host nations.)

Now, why should any nation recognize or be committed to a state that is defined by the religion of Judaism? Is this not giving tacit assent to the tenets of the Jewish religion? 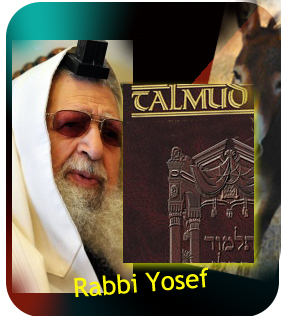 Besides being of the “spirit of anti-Christ,” Judaism is based on the Talmud which looks upon the Gentiles as cattle whose purpose is to serve the Jews. Former chief rabbi of Israel and leader of the ultra-religious Shas Party, Rabbi Ovadiah Yosef, unabashedly announced this tenet of Judaism when speaking on the subject of non-Jews working on the Jewish Sabbath:

Imagine that one’s donkey would die, he’d lose his money. This is his servant. That’s why the donkey gets a long life, to work well for its master.

Why are gentiles needed? They will work, they will plow, they will reap. We will sit like an effendi and eat.” View Entire Story Here.

And Jewry worldwide is indeed having its cake and eating it too.