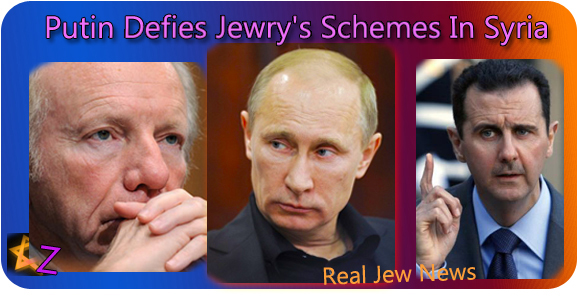 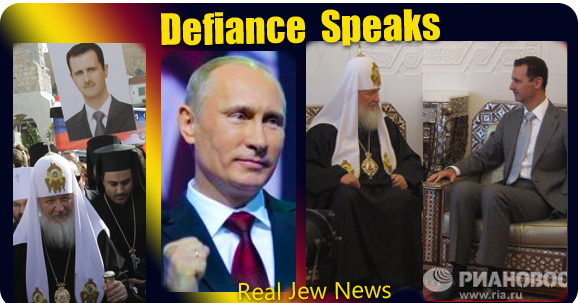 IN A DISPLAY OF DEFIANCE, Vladimir Putin sent Russian Patriarch Kirill on a ‘religious’ mission to Syria on November 15 2011.


“God will protect the Syrian people from bloodshed,” declared the Patriarch after touchdown in Damascus in preparation for his meeting with Syrian leader, Bashar al-Assad.

The Patriarch’s visit was a clear signal to the Jewish-controlled West that Putin will checkmate Zionist schemes to bisect Syria into pro and anti Assad entities. 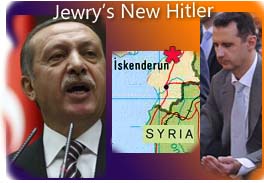 For on November 28 2011, a group of military officers from NATO and the Persian Gulf established an operational command at Turkey’s city of Iskenderun on the border of North Syria with plans for military intervention.

Mimicking the Jewish war of words against Assad, (Jew Senator Lieberman recently called Assad a “thug” when he demanded —as he did with Gadhafi— that “Assad must go”), Turkey’s prime minister Recep Tayyip Erdogan, (a secret Jew), turned on his former friend by calling Assad, “a new Hitler.”

IN YET A FURTHER DEFIANCE of Jewry’s designs on Syria, on December 1st 2011, Putin delivered to Syria the first of 72 Yakhont supersonic anti-ship missiles designed to break any sea blockade imposed on Syria.

Putin also sent to Assad the first of the advanced Pantsir-1 anti-air missile that has the capacity to break a no-fly zone against most types of aircraft should one be imposed by the war mongering Jews and their puppets. (Talmudic Jew, Senator Joseph Lieberman, was the first to demand a no-fly zone over Syria.) 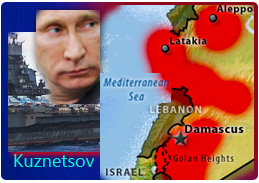 And the Yakhont missile can target US and Israeli vessels blockading Syria’s shores at a distance of 300 kilometers.

The nuclear-armed US carrier strike force, the USS George HW Bush, arrived in the Mediterranean bordering Syrian waters on November 23 2011 in the wake of the three Russian warships anchored earlier opposite Tartus which established a command post in the Syrian port.

The Russian warships will be augmented by Russia’s class aircraft carrier, the Admiral Kuznetsov, which is due to be in harbor by December 10.

The Kuznetsov carrier and its accompanying strike vessels will enter the very same Syrian offshore waters as the USS Bush and the US Sixth Fleet, which is permanently posted in the Mediterranean. Indeed, a face-off between the superpowers is now in the making.

BACK TO THE FUTURE vis-a-vis the Syrian crisis brings the Cold War of yesteryear into the present with the fear of a possible launching of World War 3.

A potential conflagration between the two superpowers is reaching frightening levels in the Mediterranean with vessels of both the US and Russia maneuvering for battle positions.

Precipitated by the Jewish-run US State Department’s decision on November 23 2011 to sever its treaty with Russia in exchanging information on troop deployments, Moscow is now engaged in drawing a line around Assad’s presidential palace in Damascus. 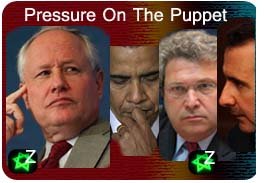 Agitating for a US war on Syria are, of course, the usual suspects: Jewish neocons William Kristol and Robert Kagan of the Foreign Policy Initiative, a reincarnation of the Project for the New American Century which lobbied for the genocide of the Iraqi people via promoting the lie of Saddam Hussein’s so-called “weapons of mass destruction.”

In Kristol’s and Kagan’s paper, “Towards a Post-Assad Syria,” (with their blood lust still running afresh from their Jewish pens), the two diehard neocons demanded that Obama institute “crippling sanctions” on the Assad regime, provide assistance to Syrian opposition groups, and impose a no-fly zone over Syria. 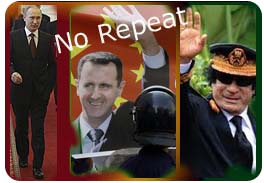 But Jewry has now met its match. Its nemesis, Vladimir Putin, is warning the Jewish led-by-the-nose US and NATO that they will not be allowed to repeat their feat in Libya of overthrowing Muammar Gadhafi by ousting Syria’s president Bashar al-Assad.

“Armed groups that maintain contacts with a host of Western countries are provoking the unrest. Everyone knows this.” View Entire Story Here.

Indeed, it is a KNOWN FACT that Israel and its colony, the Zionist States of America, have been undermining Assad’s regime by equipping ‘protesters’ with arms and money.

“THE RUSSIANS AREN’T SUCKERS,” Brzezinski once remarked with regard to Moscow’s opposition to the Jewish Lobby’s war mongering schemes in the Middle East.

And Vladimir Putin, who has the ability to leave the Jewish-controlled West gasping for air, can land the deadliest sucker-punch of them all.

And: Putin And The Jewish War On Iran Click Here