GENERAL GEORGE PATTON’S MURDER on 21 December 1945 is one of the most concealed events in military history.


Although Patton’s military file at the National Archives in St Louis has over 1300 pages of documents, only a handful of pages are devoted to the car crash. Strangely, the 5 on-the-scene military reports of the incident disappeared shortly after archived. Why?

Patton’s end began on 9 December 1945 when after setting out on a pheasant hunting trip near Mannheim, Germany, a two-ton US Army truck collided into his Cadillac staff car.

Patton suffered neck injuries either from a bullet or less likely from impact but was not seriously hurt. Yet his driver, Horace Woodring and his chief of staff, General Hap Gay, walked away with barely a scratch.

On the way to the hospital, Patton’s rescue vehicle was struck again by another two-ton Army truck. This time he was injured more severely, but still clung to his life.

Neither of the truck drivers were arrested nor had their names disclosed although Patton’s driver stated that the first truck was waiting for them on the side of the road as they’d started up from a railroad track stop.

It was later reported by former intelligence agent Ladislas Farago, that the driver of the first truck, Robert L Thompson, (who was whisked away to London before he could be questioned), was not authorized to drive the vehicle and had two mysterious passengers with him “in violation of rules.”

Ladislas also pointed out that although the crash occurred on a remote road on a quiet, no-work Sunday morning, a large crowd of mostly military personnel quickly descended on the scene.

Once at the hospital, Patton was able to contact his wife in America urging her to remove him from the hospital because, “They’re going to kill me here.” And that they did.

On 21 December 1945, Patton was pronounced dead due to an “embolism,” that is, a bubble of blood which is fatal when it reaches a vital organ. It can be introduced into the bloodstream with a syringe by anyone with brief medical training.

Not only did the US army make no investigation into the “accident” - but no questions were raised about his “embolism.” The remains of this American hero were never brought to the United States and no autopsy was ever performed.

WHEN PATTON ASSUMED COMMAND of occupied Germany in October 1945, he came to a new understanding of the European conflagration.

The war hero expressed grave misgivings regarding the harsh treatment of Germans by the Allies and urged creating a strong Germany to counter the advance of Soviet Russia into Eastern Europe.

The more Patton saw of the Soviets, the stronger his conviction grew that the right course of action was to stifle communism while the opportunity was ripe.

But Patton was thwarted by Roosevelt’s Jewish advisers, Henry Morgenthau and Bernard Baruch, who pursued a post-war bond with Jewish-Soviets.

The conflict between Jewry and Patton grew when he refused to remove German civilians from their homes so as to house “Displaced Persons.” Most of these were Jews who were never “displaced” but rather had swarmed into Germany from Poland and Russia.

“The virus started by Morgenthau and Baruch against all Germans is semitic revenge. Now I’m being ordered to remove German civilians from their homes for the purpose of housing Displaced Persons.

It appears that this order is to punish the German race and not individual Germans. It’s against my Anglo-Saxon conscience to remove a person from his house without due process of the law.

Those issuing these orders believe that the Displaced Person is a human being, which he is not. This applies particularly to the Jews, who are lost to all decency, relieving themselves on the floors, showing themselves to be lower than animals.” View Entire Story Here.

When Patton later linked Communists with Jews, his fate was sealed. The Jewish-owned press in America began a smear campaign describing Patton as “soft on Nazis.”

General Patton had always carried with him a special notebook. It disappeared from his pocket upon his arrival at the hospital after the collisions.

“I have a little black book in my pocket,” Patton once said, “and when I get back home I’m going to blow the hell out of everything.” But Jewry made sure Patton would never see America again.

IN HIS BOOK, “Target Patton,” author Robert Wilcox describes his interviews with WWII sharpshooter, Douglas Bazata, a Lebanese Jew, who died in 1999.

Based on these interviews, (Bazata, with declining health, was tormented by qualms of conscience), Wilcox details how the marksman staged the car crash by getting a troop truck to plough into Patton’s Cadillac.

He then arranged for the General to be shot with a low-velocity projectile which entered Patton’s neck while his fellow passengers escaped without a scratch. (The impact theory is less likely since the vehicles were advancing at only 20 miles per hour, both being hardly damaged.)

Bazata said that the order “to silence Patton” was given by the head of the OSS, (forerunner to the CIA), General “Wild Bill” Donovan, who was pursuing close ties with Communist intelligence officers. 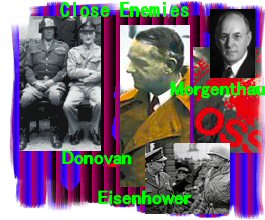 Donovan told Bazata, “We’ve got a terrible situation with this great patriot, he’s out of control and we must save him from himself and from ruining everything the allies have done.”

The marksman gave similar testimony to a group of 450 ex-members of the OSS at the Hilton Hotel in Washington on 25 September 1979.

Bazata said, “Many high-ranking military persons hated Patton. I know who killed him because I was hired to set up the accident by General William Donovan for $10,000. But since Patton didn’t die in the accident, he was kept in isolation in the hospital where he was killed with an injection.”

General Bill Donovan is alleged to have been a crypto Jew, as his mother, Anna Letitia Donovan, was likely a Jewess. Her name, “Anna Letitia,” is typically Jewish but uncommon as an Irish name.

Donovan’s rise as a Wall Street lawyer, his intimacy with FDR’s Jewish inner circle, and his role as adjunct to Jewish Judge Samuel Rosenman at the Nuremberg trials, strengthens the premise of Donovan’s Jewish identity, or at least, his Jewish sympathies.

And those “sympathies” felled a great American hero through the intrigues of the dark forces of international Jewry now pervasive in our post WWII world.

And: Hitler’s Early Views On The Jews - A Critique Click Here