Are Jews Guilty Of Dual Loyalty?

ARE JEWS GUILTY
OF DUAL LOYALTY?

NO SOONER DID THE 2010 ELECTIONS CONCLUDE, than Jewish Republican Senator, Eric Cantor, “pledged allegiance” to the State of Israel.

Cantor, who is set to become the highest ranking Jewish member of Congress in history, met with Israeli Prime Minister, Benjamin Netanyahu, at New York’s Regency Hotel shortly after the polls closed.

At the meeting, Cantor vowed that Republicans will “serve as a check” on the Obama Administration and that the “security” of America and Israel is “reliant” upon each other.

In response to criticism of Cantor for siding with a foreign leader against US policy, and charges of “dual loyalty” for allowing allegiance to the US to take a back seat to fealty to Israel, American Jewry rose to Cantor’s defense.

David Harris of the American Jewish Committee called the criticisms “a whiff of McCarthyism.”

And William Jacobson of Cornell’s Law School labelled the attacks as “Jew Baiting.”

In other words, as EU official Karel De Gucht recently stated, Jews will advance their own interests regardless of rational arguments to the contrary.

“I AM ISRAEL’S GUARDIAN IN THE SENATE,” proclaimed Senator Charles Schumer to a Jewish audience last April.

New York Congressman, Jerrold Nadler, not to be upstaged by Schumer’s commitment to a foreign constituency, announced his own ‘mission from God’ with: “Settlements illegal?…not as far as I’m concerned.”

The “dual loyalty” issue came to fisticuffs last spring when political analyst, Stephen Walt, hated by Jews for his book, The Israel Lobby, was tarred by Jewish lobbyist Robert Satloff as a “McCarthyite.”

The accusation of “Jewish smearing” came on the heels of Walt questioning the loyalties of Jewish officials in high places such as Dennis Ross, senior advisor on the National Security Council, who also serves on various Jewish think tanks. 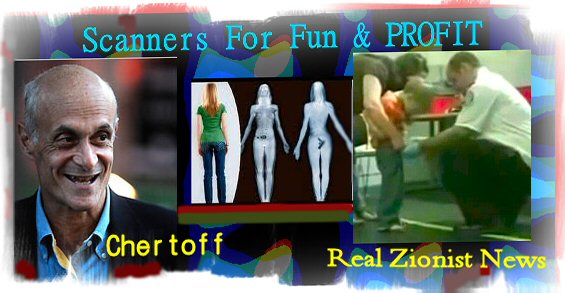 IN A DIFFERENT TWIST on the question of Jewish dual loyalties, former Homeland Security chief, Michael Chertoff, is currently being accused of “abusing public trust” by touting and selling airport scanners for “monetary gain.”

Like many of his fellow tribesmen, Chertoff is a dual citizen of Israel and America.

But unlike many of his fellow Americans, Chertoff will never step foot in the body scanners he sells. He prefers to fly by private jet.

In all fairness to Israel-Firsters — and specifically to Chertoff’s ripping off of the American taxpayer — the saying, “A fish always rots from the head down,” may apply.

In other words, with America now being led by Jews who advance their own interests, it is the guts of the American fish that is rotting along with the head…