JEWS DOMINATE OUR LIVES through their control of wealth. The basic principal of Jewish dominance as stated in the Protocols of the Learned Elders of Zion is, “Permit us to issue and control the money of a nation and we care not who makes its laws.”

In 1764, a Yeshiva Jew named Mayer Amschel Rothschild waxed wealthy under the favor of his patron, William IX, Landgrave of Hesse-Cassel in Frankfort. William IX was a coin collector, and the pawnbroker Mayer Amschel supplied him with rare coins. An association developed which proved advantageous for monarch and subject alike. When the Landgrave rented the Hessian mercenaries to George III of England to fight against the American patriots of the Revolutionary War, Meyer Amschel handled the financial arrangements. Thus the Jewish House of Rothschild began its first financial “war” venture.

Nathan Rothschild, ablest of Amschel’s five Jewish sons, established himself in London. His four Jewish brothers he placed, respectively, in Frankfort, Paris, Naples, and Vienna. The 1st rule of their Jewish management was:

——- “The different banks should each act in the common interest, regardless of the nation in which it was placed.” ——-

The end of the Napoleonic wars found the Jewish House of Rothschild entrenched to exploit their opportunities. For example: Austria-Hungary after the war in attempting to put her finances in order, retire her paper money, and reduce the public loan, required ready money. Her share of the French indemnity was payable over a series of years. For generous discount the Rothschilds advanced the indemnities. The Rothschilds, though Jews in a Gentile Christian society, demanded as their reward, titles of nobility.

In this way a Jewish financial network was established that eventually encompassed Europe. Thus it was observed by E. Alexander Powel in his 1909 book, The Unseen Empire:

——- “The European peoples are no longer under the Government of the respective nations. They have become the subjects of another Power - a Power unseen but felt in the palace as in the cottage. It is the occult Power of the House of Rothschild that reigns over princes and paupers who fawn in the most abject subserviency. Soon if not already, America will fall to this unseen Power.” ——- 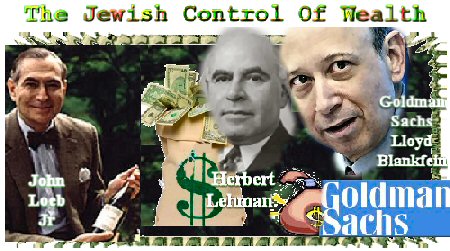 THIS UNSEEN POWER has indeed subjected America to its occult Jewish control. Perhaps the best proof of the constant expansion of Jewish financial power in America is furnished by the activities of the great Jewish banking houses and investment companies. Year by year, Goldman, Sachs and Co., Kuhn, Loeb and Co., Lazard Freres, Lehman Brothers and others, are pushing their financial control deeper and deeper into the American economy. It should be noted that though these banking houses have non-Jewish partners, they nonetheless remain firmly in Jewish hands.

The extent of Jewish financial control is indicated by examining the roster of Directors of America’s leading Corporations. By the 1960’s for instance, Sidney Weinberg of Goldman, Sachs was on the Board of Directors of the Ford Motor Company.

By the 1970’s, other Jewish partners of Goldman, Sachs were on the Board of Directors of such companies as: Continental Can; McKesson and Robbins; Champion Papers; United Biscuit; B.F. Goodrich; Pillsbury; and Sperry-Hutchinson. Partners of the Jewish banking house of Kuhn, Loeb are directors of: Westinghouse; Sears Industries; U.S. Rubber; Getty Oil; and Kennecott Copper, to name a few.

JEWS CONTROL OUR LIVES and the “Anti-Semitism” of our day has as its watchword, Fagan is alive and well on planet earth. Politicians and Universities with their large Jewish endowments, who like the European powers of the 19th Century, are fawning in abject subservience to the Jewish financial moguls.

The removal of all things Jewish from rational discussion relegates unfriendly opinions of Jews in the hushed subconscious of millions upon millions of Americans. Instead of submitting a critique of the Jews to the free play of ideas, the Jews and their liberal supporters have managed to organize an inquisition in which all writing and thoughts critical of Jewry are treated as a threat to the moral order of mankind.

BUT THE MORAL ORDER of mankind has been subverted and overturned by the Jewish control of wealth. The Jews get what they want, whether or not it serves the interest of morality, because of the root of all their evil, that is, their money. But the sudden release of resentment pent up in millions upon millions of Americans, could very well erupt into an explosive backlash against the Jews with their control of our lives.

THE ONLY ANSWER in preventing such an eruption, is for America to become a Christian nation once again and put the Jews in the rank of the “infidel.” This will be the beginning of severing their the Jews’ control of our lives.

Let the Jews be told that their ancestors committed Deicide in crucifying the Lord of Glory, Jesus Christ. And let the Jews be told, (if we set the example), that they need to repent, and become good Christian citizens of the host nation in which they reside.