The Jews - Their Lies - Their Critics

The Jews - Their Lies - Their Critics 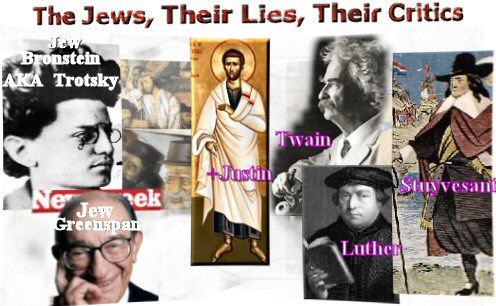 The Jews - Their Lies - Their Critics
By Brother Nathanael Kapner, Copyright 2007-2008

Or Send Your Contribution To:
Brother Nathanael Kapner; PO Box 547; Priest River ID 83856
E-mail: bronathanael@yahoo.com
CRITICS OF THE JEWS throughout history seems to have hit upon a common thread in their observations of the Jews as quoted below.


For as the French expression goes, “plus ca change, plus c’est la meme chose” - (the more things change the more things stay the same) - the same Jew, in his hatred for Jesus Christ and the host nations where he has been granted entrance, appears throughout the annals of time.

“The Jew is a cancer slowly eating into the flesh of other nations,” said the great French philosopher Ernest Renan. Alas! The cancer is now malignant, festering, and deadly.

“The customs of that most criminal nation have gained such strength that they have now been received in all lands. The conquered have given laws to the conquerors.”
De Superstitione

“If you curse Him and those who believe in Him, and when you have the power, put us to death, how is it not possible that requisition shall not be made of you as being altogether hard-hearted? For you are behind all the persecutions of Christians. You wander from place to place hating and undermining the Christian faith.”
Dialogue With Trypho The Jew

“Do not be surprised if I call the Jews pitiable. They really are pitiable and miserable. When the Morning Sun of Righteousness arose upon them, they thrust aside its rays and still sit in darkness. And now you let them frighten you?”
Homilies Against Judaizing Christians

“God gave the Jews the Sabbath because of grossness and sensuality and an absolute propensity for material things.”
Exposition Of The Orthodox Faith

“The Jews should not be allowed to keep what they have obtained from others by usury; It were best that they were compelled to work so that they could earn their living instead of doing nothing but becoming avaricious.”
On the Governance of the Jews

“Jews have to be reminded that they are enjoying rights in any country since they left Palestine. Their ethical and moral doctrines, as well as their deeds, rightly deserve to be exposed to criticism in whatever country they happen to live.”
Sermons

“The Jews are so hardened that they listen to nothing; though overcome by testimonies they yield not an inch. It is a pernicious race, oppressing all men by their usury and rapine. If they give a prince or magistrate a thousand florins, they extort twenty thousand from the subjects in payment. We must ever keep on guard against them.”
The Jews And Their Lies

“The Jews who have arrived would nearly all like to remain here, but learning that they (with their customary usury and deceitful trading with the Christians), were repugnant to the magistrates, we have, for the benefit of this weak newly developing place and land in general, deemed it useful to require them to depart.”
Letter To The Dutch West India Company, From New Amsterdam, September 22, 1654
[The request was denied by the Company because of Jewish investment interests]

“The Talmud teaches the Jews to steal the goods of Christians, to regard them as savage beasts, to kill them with impunity, and to utter every morning the most horrible imprecations against them.”
Encyclopedie

“The day will come when all nations amidst which the Jews are dwelling will have to raise the question of their wholesale expulsion, a question which will be one of peaceful existence or perpetual social fever.”
Are These Things So?

“In the England of John’s time everybody got into debt to the Jew. He gathered all lucrative enterprises into his hands. He was the King of Commerce. He had to be banished from the realm. For like reasons, Spain had to banish him 400 years ago, and Austria a couple of centuries later.

“In all ages Christian Europe has been obliged to curtail the activities of the Jew. If he entered upon a trade, the Christian had to retire from it. If he set up as a doctor, he took the business. If he exploited agriculture, the other farmers had to get at something else. The law had to step in to save the Christian from the poor-house.

“Still, almost bereft of employments, he found ways to make money. Even to get rich. This history has a most sordid and practical commercial look. Religious prejudices may account for one part of it, bit not for the other nine.”
Concerning the Jews, Harper’s Monthly Magazine

“The European felt instinctively that the Jew is a stranger, who emigrated from Asia. The so-called prejudice is natural sentiment. Civilization will overcome antipathy against the Israelite who merely professes another religion, but never against the racially different Jew.

“The Jew is a cancer slowly eating into the flesh of other nations. Exploitation of the people is his only aim. Selfishness and a lack of personal courage are his chief characteristics; self-sacrifice and patriotism are altogether foreign to him.”
Essays

“There is already something like a Jewish monopoly in high finance. There is the same element of Jewish monopoly in the silver trade, and in the control of various other metals, notably lead, nickel, quicksilver. What is most disquieting of all, this tendency to monopoly is spreading like a disease.”
The Jews

“No obstacle discourages them; they persevere throughout the world, throughout the centuries, the unity of their race. The Talmud has given them a powerful organization which modern progress has been unable to change. Deep, ineradicable hatred of everything that is not Jewish stimulates them in the war which they wage against Christian Society, which is too divided to be able to fight with the necessary energy.”
Jewish Austria

“The Jews form a state within the state in which he exists, and, obeying their own laws, they evade those of their host country. There is in the Jew an innate hatred for the nations in which he existsâ€¦The Jews always consider an oath regarding a Christian not binding. During the Campaign of 1812 the Jews were spies, they were paid by both sides, and they betrayed both sides.”
History Of The Prussian Kingdom

“If there is an ingrate in history it is the Jew. In this land which befriended him he has conspired, plotted, undermined, prostituted and corrupted and (hiding to this hour behind the braver screen of other folks), dares to contrive and scheme the death of every Christian principle which has protected him.”
Sermons

“The Jews have vanity without pride, voluptuousness without taste, and learning without wisdom. Their fortitude, such as it is, is wasted upon puerile objects, and their charity is mainly a form of display.”
Selected Works

“Since the earliest times it is as the exploiter that the Jew has been known amongst his fellow men of all races and creeds. The Jew has persistently shown himself ungrateful.

“The Jews have always formed a rebellious element in every state. England is no longer controlled by Britons. We are under the invisible Jewish dictatorship - a dictatorship that can be felt in every sphere of life.”
World Revolution, The Plot Against Civilization

“The Boer War occurred 37 years ago. Boer means farmer. Many criticized a great power like Britain for trying to wipe out the Boers. Upon making inquiry, I found all the gold and diamond mines of South Africa were owned by Jews; that Rothschild controlled gold; Samuels controlled silver, Baum controlled other mining, and Moses controlled base metals. Anything these people touch they inevitably pollute.

“There is no need to be delicate on this Jewish question. You must face them in this country. The Jew should be satisfied here. I was here forty-seven years ago; your doors were thrown open to them and you were then free. But now that the Jew has got you absolutely by the throat this is your reward.”
New York Speech, October 30 1937

“The Montefiores have taken Australia for their own, and there is not a gold field or a sheep run from Tasmania to New South Wales that does not pay them a heavy tribute. They are the real owners of the antipodean continent. What is the good of our being a wealthy nation, if the wealth is all in the hands of German Jews?”
Saturday Evening Post, June 19 1919

“History shows that the Jew has always been, by nature, a revolutionary and that, since the dispersion of his race in the second century, he has either initiated or assisted revolutionary movements in religion, politics and finance, which weakened the power of the States wherein he dwelt. On the other hand, a few far-seeing members of that race.”
Judaism And Bolshevism

“The revelation of Jesus Christ has no significance for the Jew! … I have searched through a whole library of Jewish books in the expectation of finding - naturally not belief in the Divinity of Christ, nor the idea of redemption - but the purely human feeling for the greatness of the suffering Savior - but in vain. A Jew who feels that, is, in fact, no longer a Jew, but a denier of Judaism.

“And while we find even in Mohammed’s Koran, at least a vague conception of the importance of Christ and profound reverence for His personality, a cultured leading Jew of the nineteenth century, Heinrich Graetz, calls Christ ‘the new birth with the death mask which inflicted new and painful wounds upon the Jewish people.’ Graetz cannot see anything else in Him.

“In view of the Cross, Graetz assures us that the “Jews do not require this convulsive emotion for their spiritual improvement,” and adds, “not among the middle classes of inhabitants of the cities.” His comprehension goes further. In a book, republished in 1880, by a Spanish Jew, Moses de Leo, Jesus Christ is called a “dead dog” that lies “buried in a dunghill.”

“Besides, the Jews have taken care to issue in the latter part of the nineteenth century several editions (naturally in Hebrew) of the so-called ‘censured passages’ from the Talmud, those passages usually omitted in which Christ is exposed to scorn and hatred as a “fool,” “sorcerer,” “profane person,” “idolater,” “dog,” “bastard,” “child of lust,” etc., so, too, His sublime Mother, a “hairdresser and harlot.”
Foundations of the Nineteenth Century