Judaism Is A Racist Idea 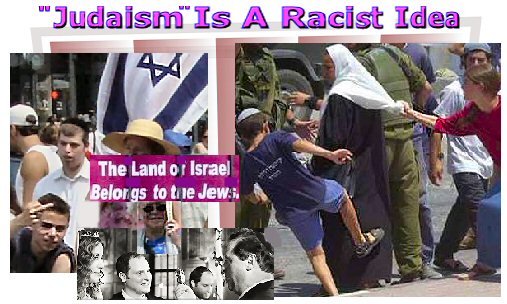 Judaism Is A Racist Idea
By Brother Nathanael Kapner, Copyright 2008-2011

Unique Source: How Jewish Supremacism Is Destroying America @ Rense.com Here
I GREW UP AS A JEW. I attended synagogue from my youth up until college in an upper middle class Jewish environment. I attended Sabbath services regularly every Friday night and Saturday morning from childhood until the age of 18.

When I was 21 years old, I became a Christian, having read the New Testament for the first time and was captivated by the Person of Jesus Christ and His claims of being the Messiah. I am now 57 years old and have no regrets of becoming a Christian but rather I thank Christ everyday for this great privilege.

In the case of The International Association of Jewish Lawyers and Jurists, what does It mean to be a “Jewish” lawyer? In the case of B’nai Brith is one a “Jew,” a “Son of the Covenant,” just by belonging to B’nai Brith - though that “Jew” does not even believe in God? And in the case of the Jewish People Policy Planning Institute which is dedicated to strategic plans to insure the perpetuation of the State of Israel, if a “Jew” belongs to this organization though never steps foot in a synagogue, is that person “Jewish?”

To be a “Jewish” lawyer means nothing more than that lawyer identifies himself with the social grouping known as “Jews.” Most Jewish lawyers are secularists. Yet they tacitly subscribe to the religion known as “Judaism.” What then does “Judaism” mean for the secular Jewish lawyer? It could only mean belonging to a racial club. Even your ultra Orthodox Jew, who indeed practices Judaism, is against proselytism of Gentiles, thus demonstrating the racial nature of Judaism.

Zionism is dedicated to the establishment and perpetuation of a Jewish homeland. Yet most Israelis are atheists. The Jew points his finger at ‘White Society’ and calls the founding fathers of America, “racists” and pushes for open immigration of Third World nations that we may have a multi-racial society. But the Jew will live in his wealthy suburban neighborhood, *apart* from that multi-racial society. And the Zionists are dedicated to a single racial citizenship of the State of Israel.

Judaism, as the rabbis say, is the belief in one God. Add to this various rituals, rules and regulations mixed in. But essentially, Judaism is the promotion and preservation of the Jewish race. For in Judaism there are 3 major differing branches: 1. Reformed; 2. Conservative; 3. Orthodox.

Reformed Judaism is secular; Conservative Judaism is something between the other two; Orthodox Judaism is focused on rules and regulations more than love for God. How then can all three branches, differing as they do, claim and be recognized by one another, as espousing Judaism?

I will tell you why. Because Judaism is nothing more than the advancing of the Jewish race more than it is of a belief system. For if Judaism was really about a belief system then Orthodox Jews would not oppose proselytism among the Gentiles.

The Jewish feminist, (and lesbian), Susan Sontag, who was born “Susan Rosenblatt,” is known for her famous saying: “The white race is the cancer of humanity.” But what color is Susan Sontag? Is she black? Is she yellow? For though Susan Sontag is a White American, she and her Jewish cohorts see themselves as something other than being “white.”

Why is this? Because she and her tribal members identify as “Jews” & not “whites.” No, not even as “Americans,” nor even of one blood with all mankind. The Jews really believe that the blood running in their veins is of a superior nature to the blood of the white American, the Asian, and the Black, all of whom, many Jews look down upon. How do I know this to be the case? Because, growing up as a Jew, my former compatriots would call white Americans, “goys,” the Asians, “chinks,” and the Blacks, “schwartzas” & “shooks.”

It should not then come as any surprise that the billionaire Zionist Charles Bronfman, owner of the Seagram liquour company, said in a year 2000 Zionist fund raising speech:

— “You can live a perfectly decent life not being Jewish but I think you’re losing a lot - losing the kind of feeling you have when you know that throughout the world there are people who have the same kind of DNA that you have.” — Here.

And this, having the same “DNA” is what it means to living a life that is “Jewish”…

JUDAISM IS A RACIST IDEA because one can be an atheist and still be considered a subscriber to Judaism. Make no doubt about it - a Gentile who converts to Judaism is considered a second-class citizen by Jews. And it is the Gentile, the “goy,” with his Christianity, that the Jew in his audacity will label a racist offender.

Is it not time that we tell the Jews that their racist hypocrisy will not gain currency amongst us any longer?