How The Jews Think - Pt II 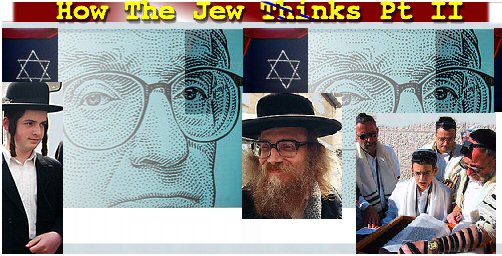 HAVING GROWN UP AS A JEW and having gone to an upper middle class synagogue throughout my childhood up through my young adult years, I am uniquely qualified to do an expose on the inner workings of the Jewish mind. Now that I am an Orthodox Christian, having converted in 1971 to Christianity, I can see very clearly how the Jew thinks:

1. The Jew has divorced from his mind all spiritual hopes of the next world. The Jew sees his continuity in his progeny so to carry on his name in this earthly and material existence.

2. The Jew lives for this world not for the world to come. The Jew is therefore a crass materialist.

3. The Jew, though “non religious” gives tacit compliance to the vision of their rabbis who foresee an earthly messiah who will establish a messianic kingdom in which the Jews will be the supreme heads of the nations.

4. The Jew does not like to perform manual labour. To make money the Jew is dependent on the labours of others. Therefore the Jew is primarily to be found in the service professions: whether financial, academic, medical, legal, mercantile, journalistic, or entertainment.

5. The Jew in the financial realm hopes to have all capital beneath his control. The Jew strives to get the possession of riches without industry on his part.

6. The Jew, in order to attain financial power, views Christianity, with its attendant moral influence, as a threat. For profligacy, dissolute manners, and perversion of sexual mores, places the Gentile, the “Goy” under his dominion.

7. The Jew in the academic realm strives to educate according to his Jewish World View. The Jewish World View is the unspoken perception that the Gentiles, the “Goyim,” are ultimately his enemies.

8. The Jew, therefore, who operates in the academic realm, will educate the “Goyim” to believe that the Jew has been an innocent victim of Gentile enmity throughout the centuries. Thus a certain level of obligation is inculcated into the “Goyim” toward the Jew - that he is deserving of deferential treatment.

9. The Jew who operates in the journalistic realm, which today is his total control of the Press, presents current events in favour of the Jew.

10. The Jew, who operates in the journalistic realm, which today is total control of all Media, presents Christianity in a bad light. This works to his benefit. For Christianity confers strength and moral fiber to the Gentile population, which the Jew wants under his dominion.